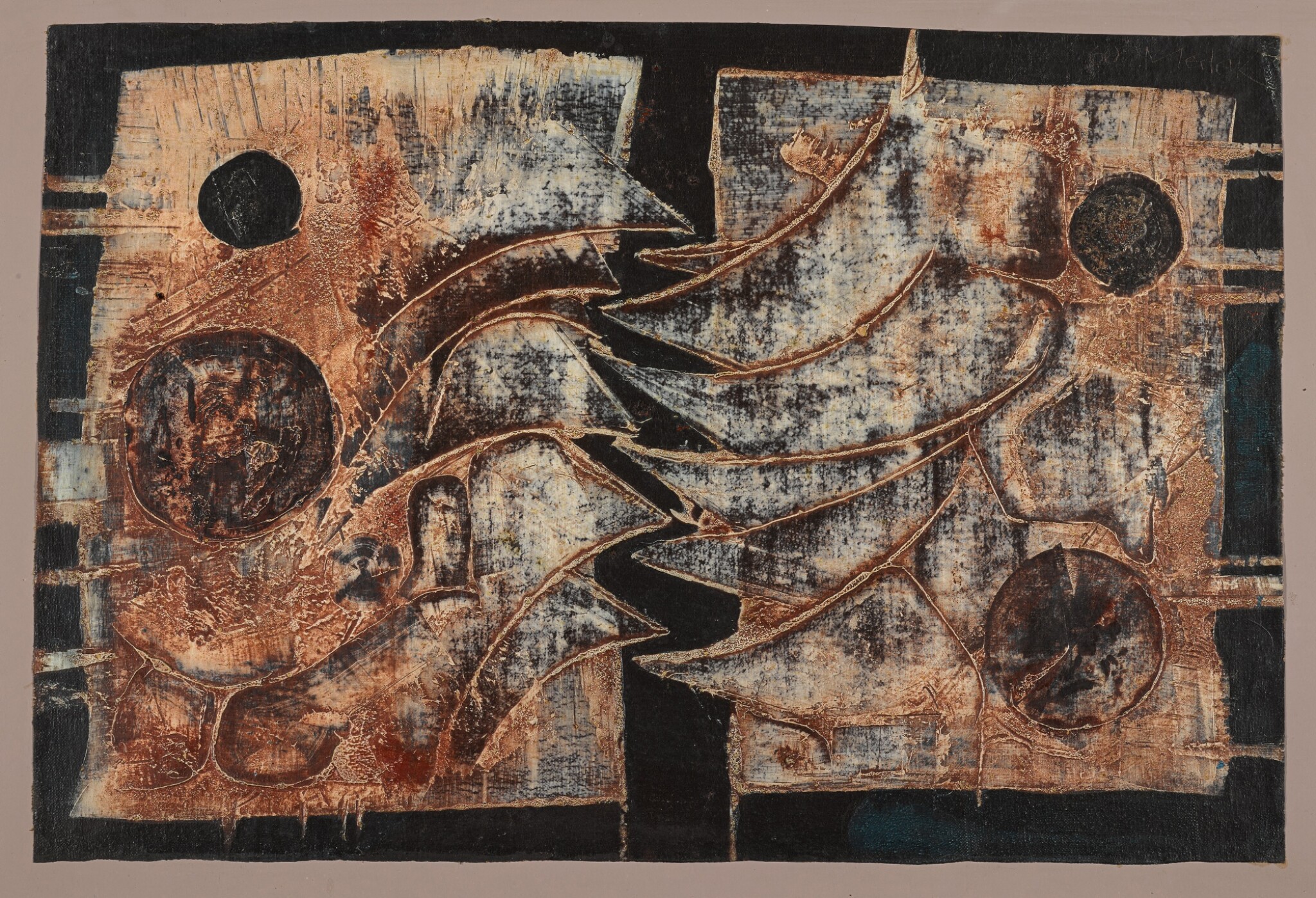 oil and enamel on canvas laid on board

This work will be included in the forthcoming Mikuláš Medek catalogue raisonné being prepared by Eva Kosáková Medková and Adéla Prochazkova.

The work is executed on a piece of canvas with unevenly cut edges by the artist that has been glued onto a board. There is a small area of glue residue visible to the upper right corner and lower right corner. There is some minor surface dirt to the board. Otherwise the work is in good condition, ready to hang. Examination under ultra-violet light reveals no evidence of retouching or restoration.

Purchased directly from the artist by the present owner in 1964
Mikuláš a Emila Medkovi, Souvislosti, North Bohemian Gallery of Fine Art, exh. cat., Litoměřice, 2007, p. 51, illustrated in black and white

Painted in 1960 the present work is part of the series Prepared Paintings. It was sold by Medek in 1964 to the current owner after an introduction from Jiri Mucha. Having been part of a private UK collection it is now visible to the public for the very first time since the 1960s.

Mikusláš Medek is one of the most significant personalities of the Czech visual arts in the 20th century. Undeterred by the strictures of the Communist government of the day, he was persistent in his quest for creative freedom. His brother, Ivan Medek, recalled the limitations placed on him as an artist: 'My brother (...) ranked among the most outstanding and most interesting artists of the 1960s, despite the fact that he was not allowed to exhibit his works and his painting could only be seen in his flat. It was a big flat near the Vltava river in Prague. It was a very peculiar case - he was a popular artist but could only work at home. But our flat was always full of people from all over the world, who wanted to see his pictures.'

The grandson of one of the country's greatest nineteenth century painters, Antonin Slavicek, and son of a fallen general of the Czech army, Medek faced a difficult upbringing both during and after the Second World War. First persecuted by the Nazis, and then by the Communists, he was prevented from completing a formal artistic education. Inspired by the Surrealists, Medek set off to find his own way, which eventually led him to abstraction (see also lot 23).

The end of the 1950s marked the transformation of Medek's painting from figurative Surrealism to abstract painting. The subject disappeared and the painting itself became the carrier of all meanings. Medek moved on to the construction of an optically illustrative model of certain psychological situations that exist in a concrete form and have a concrete effect, but are not communicated by a simple depiction.

'Medek treats the paint surface as a living matter. Destruction is concentrated on the painting matter. The paint is lacerated and scratched with spatula, knife, fingernails and a sharp brush. The painting acts as a carthasis from the tormenting, compelling ideas about the threat to life.' (Bohumir Mraz, Mikulas Medek, Prague, 1970, p. 44).