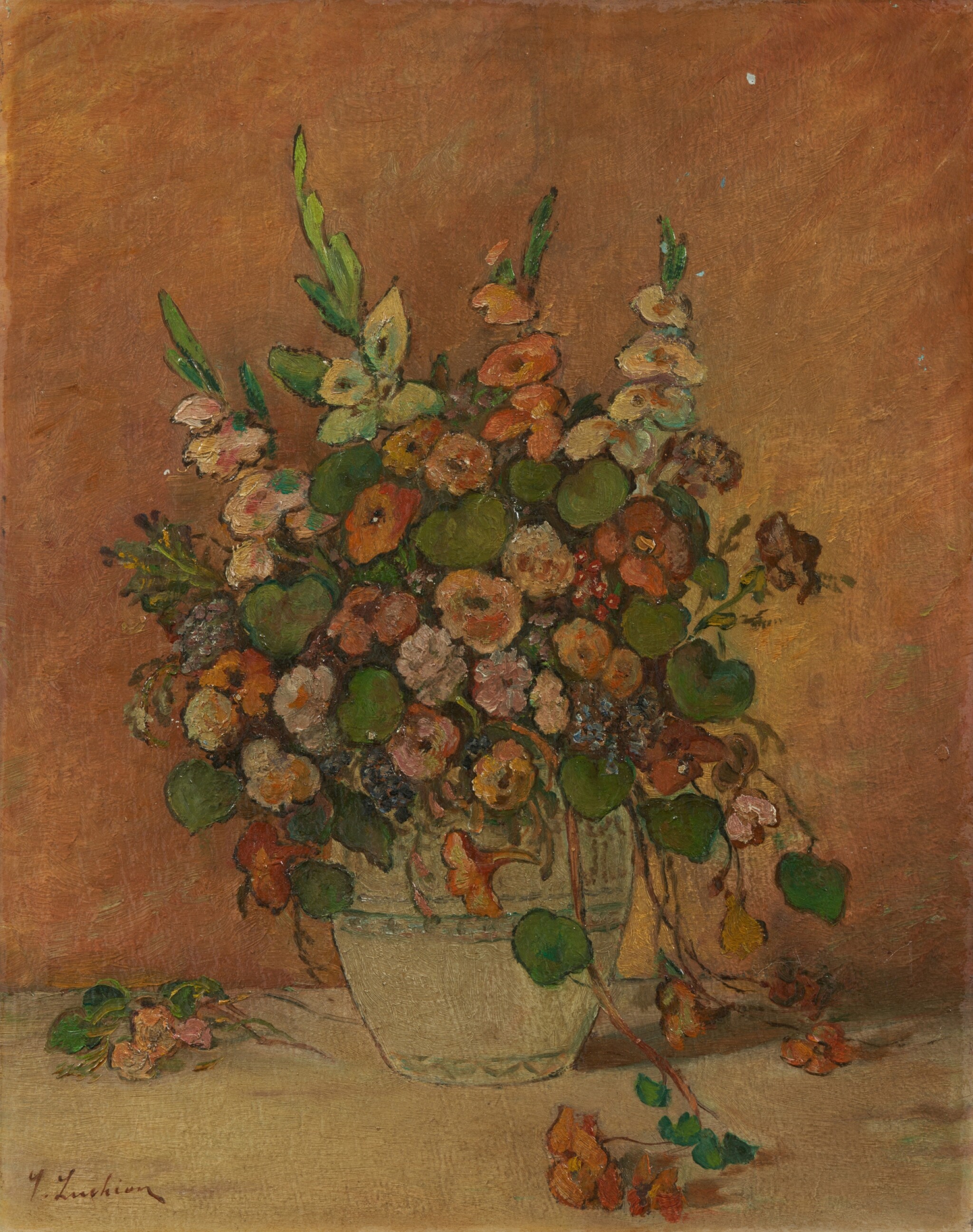 The board is in good condition, flat and even. There are a few specks of paint loss visible upon close inspection, the most noticable of these are in the background in the upper right quarter of the composition (visible also in the catalogue illustration). There are no signs of retouching visible under ultra-violet light. Overall this work is in good original condition.

Acquired by the uncle of the present owner circa 1960; thence by descent

In the second half of the 19th century and the beginning of the 20th century, at a time when Romanian society and its arts were undergoing a process of modernisation and harmonisation with the West, painting in Romania was dominated by three artists, Nicolae Grigorescu, Theodor Aman and Gheorghe Tattarescu. Aman and Tattarescu were the founders of the Romanian school of painting and proponents of academic painting. Grigorescu, who had been educated in France, at Barbizon, used the techniques and concepts he had learned there to paint a somewhat freer Romantic portrait of the Romanian rural world.

A graduate of the School of Fine Arts in Bucharest, where he studied under Aman, Tattarescu, and Grigorescu, Luchian stood out among his contemporaries as a rebellious, avant-garde painter who rejected the rigidity of academic painting. Following his studies in Bucharest, Luchian furthered his education in Munich and Paris. He rejected the Academic art of both the Bucharest and Munich schools and sought inspiration in reality, which was unusual in 19th century Romanian art. Luchian instinctively rejected the artificial forms of expression, irrespective of their nature. Instead he was fascinated and drawn to the modern currents of French art, and in particular the works of Degas, Manet, the post -impressionists and other ‘independants’.

Upon his return to Bucharest in 1892, Luchian quickly established a reputation as the first modern Romanian painter, achieving celebrity status and embodying the strong francophile and cosmopolitan tendencies of Romanian society of the time. He found himself at the forefront of an emerging new aesthetic, that soon adopted the imagery of the Munich and Vienna Secessions in addition to Symbolism, further underlying the international ambitions of various artistic currents of fin de siècle Romania.

At the height of his artistic success, in 1900, Luchian's health started to deteriorate as he suffered the first symptoms of multiple sclerosis, yet despite crippling pain, he continued to paint. As his illness got worse, he became paralysed, which prevented him from moving his hand and holding his brush. Like Renoir, he had his brush tied to his hand and continued to paint. Confined to his studio from 1909, Luchian found refuge in painting still lives, as flowers became his only connection to nature and only model. A major subject in the artist's oeuvre since 1903, his still lives of flowers carefully arranged in traditional Romanian earthenware pots, have become his hallmark style and best loved compositions.