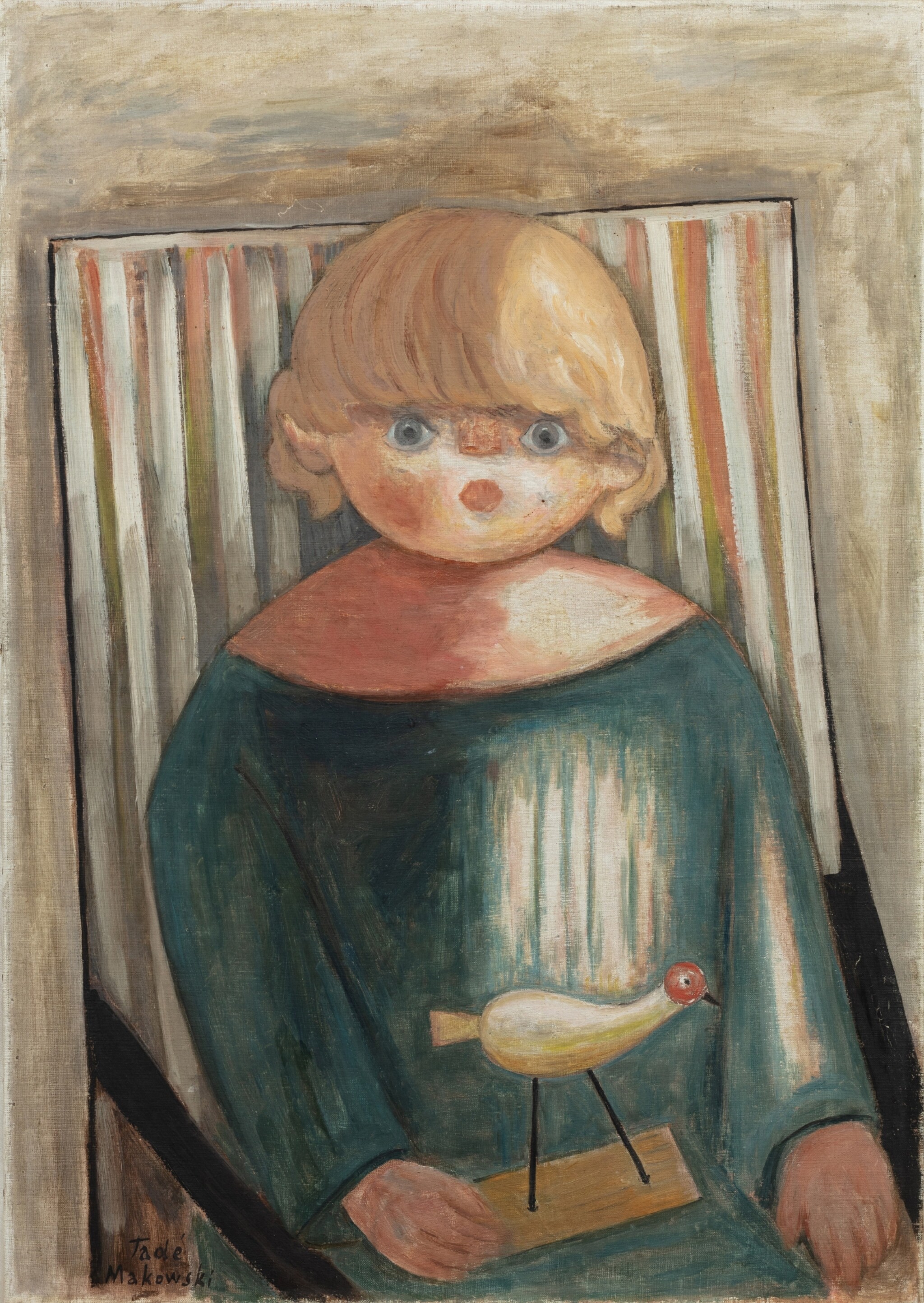 We would like to thank Adam Konopacki for his kind assistance in the cataloguing of this work. Mr Konopacki dates this work to circa 1924.

Original canvas. Some of the pigments fluoresce under ultra-violet light, however, this does not appear to be retouchings. Overall this work is in good original condition.

By descent in the family of the present owners

According to Wladyslawa Jaworska, the present work is known through a photograph from Makowski's collection, inscribed S. Londynski, Paris.

Enfant (Child with wooden bird) is a very good example of the Tadé Makowski's highly individual and recognisable style, which is unique within the context of European art. Tadeusz Makowski is generally considered as one of Poland's most original painters. He initially studied art in his home town of Krakow, at the local Academy of Fine Arts under Jozef Mehoffer and Jan Stanislawski. In 1908 Makowski embarked on an artistic voyage throughout Europe. He finally landed in Paris, where he decided to settle permanently. Makowski soon developed friendships with the artists surrounding Henri Le Fauconnier. It was at this time that he met, among others, Leger, Picasso, Mondrian, Archipenko, Apollinaire and Gromaire. He was also a close friend of Wladyslaw Slewinski, a fellow Pole who was part of the Pont-Aven school. In 1911 Makowski became a member of the Society of Polish Artists in Paris, and regularly exhibited at the Salon des Indépendants, the Salon d’Automne, the Salon des Tuileries and the Salon de l’Oeuvre Unique, as well as presenting his work internationally in exhibitions in Amsterdam, Warsaw, Barcelona, Vienna and Budapest.

Makowski's style was initially influenced by the modernist landscapes of Jan Stanislawski and reflected certain traits characteristic of the Young Poland movement. In Paris he adopted a more compressed manner of structuring his canvases and developed a tendency to render forms geometrically, which was inspired by Le Fauconnier and the Cubists. While he drew from Cubism, Makowski remained a lyrical and poetic artist in terms of subject matter eschewing the formal experimentation of the Cubists.

In 1918 Makowski introduced a motif that would be central to his work thereafter - the figure of the child. He began to focus on painting lyrical visions of children - geometric in their form, their figures as if carved from wood and adorned with conical caps. He depicted them in scenes from everyday life - within landscapes, walking along roads, in his studio, playing musical instruments, or in the company of pets and birds. Children fascinated Makowski by virtue of their detachment, innocence, and vivid imagination.

Makowski's individual style crystallized around 1927. As exemplified by the present work, his output of the late 20s and early 30s seems to portray a single type of child. Although individualized, each child possesses the same subtle, regular features and a somewhat surprised, thoughtful expression, underlined by its wide eyes. Fine lines that precisely define forms, shapes created through tonal variation and a limited palette also characterise the work of this period. Enfant encapsulates the uniqueness of style of its creator whilst conveying a sense of playfulness and joy.