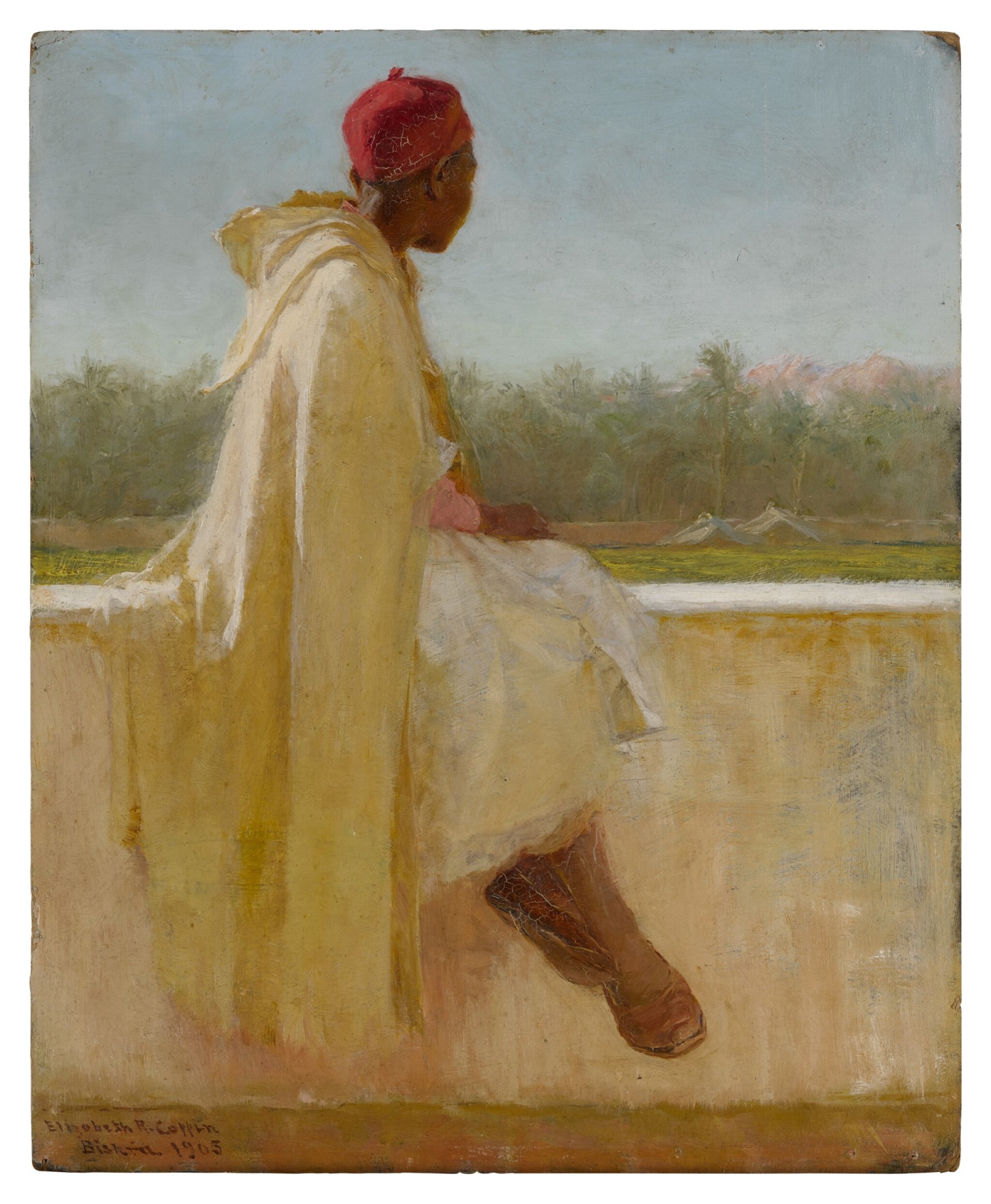 The board is painted on both sides. Front: The paint surface is stable but slightly soiled. Some damage to corners and two pin pricks at upper and lower right corners. There is a pattern of pigment separation in the boy's left foot and red cap. Under UV light, some small scattered spots of retouching in the boy's clothes and a vertical line of retouching approximately 2 inches in length in the sky at right. Back: There is a small area of paint loss at the upper edge and an approximately 1 inch horizontal line of paint loss in the foreground at left. Under UV light, no apparent inpainting.

William Doyle Galleries, New York
Albert F. Egan Jr., Nantucket, Massachusetts (purchased December 1998)
Albert F. Egan & Dorothy H. Egan Foundation (December 1999)
Margaret Moore Booker, Nantucket Spirit: The Art and Life of Elizabeth Rebecca Coffin, Nantucket 2001, pp. 116-17, 169 n. 5, pl. 25.
Elizabeth Rebecca Coffin (1850-1930) was one of the most groundbreaking women artists of the Gilded Age. Coffin was born into a well-established Quaker family with founding ties to Nantucket, where she summered regularly beginning in the 1880s and lived and worked from 1900 until her death in 1930. She earned a Bachelor of Arts at Vassar College in 1870 and in 1876 was the first person in the United States to earn a Master of Fine Arts degree, also at Vassar. In 1872, Coffin was the first woman to gain admission to The Hague Academy of Fine Arts, where she spent three years and received numerous awards for her paintings. Upon returning to the States, she studied at the Arts Students League in New York and the Pennsylvania Academy of Fine Arts, where she was a pupil of Thomas Eakins. She traveled extensively, often painting wherever she went, and showed widely throughout the United States in group presentations and monographic exhibitions.

Inscribed “Biskra, 1905” this is the earliest known work Coffin painted in Algeria, which she visited several times in the first decades of the twentieth century. Likely painted from life, the unidentified boy is draped in white, wearing a red felt cap, and sitting on a wall looking off into the desert landscape with a view of the village in the background. A landscape with a horse-drawn hay wagon is sketched on the back, attesting to Coffin’s economical use of materials while working abroad.