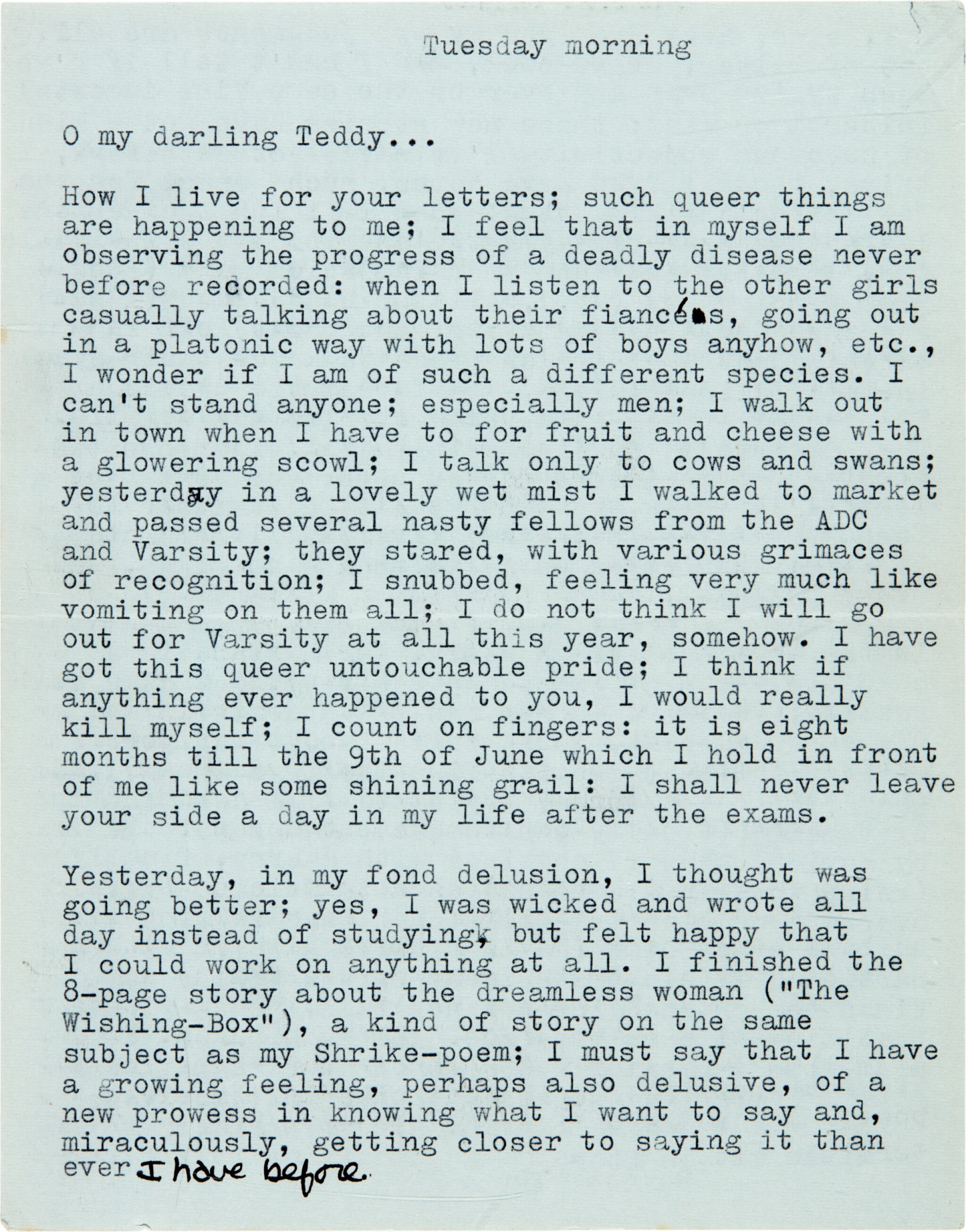 summarising the plots of two stories, 'The Wishing-Box' and 'The Invisible Man', which she has been writing, returning again to her alienation from her contemporaries and her night-terrors, scattered autograph corrections and a three-line autograph postscript, 5 pages, 8vo (177 x 140mm), [Whitstead, Newnham College, Cambridge], "Tuesday morning" [9 October 1956]

"...In the dreamless woman story, her husband is a complete escapist who accepts his vivid dreams as reality; she reviews her own private sordid and sparse dream-life, gets worried about her powers of imagination (also its like the Dryad poem) and goes from bad to worse, trying to fill her mind by reading (finally can't make out words), then by movies, then TV combined with sherry, finally (being totally sleepless) commits suicide by an overdose of sleeping pills; her day-dreaming husband comes home (having lulled himself with a particularly elaborate dream on the train) and finds her dressed for a fancy ball, dead, with a beatific smile on her face. All in 8 pages. I shamelessly plagiarized some of your magnificent dreams -- notably the fox and pike and American poets..."

Plath's summary of two stories, both featuring suicide, show her ability to generate art from the darker aspects of her psyche; her story of a wife's jealousy of her husband's imagination has unmistakable biographical parallels. The 'Invisible Man' is about a young man who is suddenly unable to see his own body at the height of a successful college career ("...his own identity, obviously, must depend on the verdicts of those around him; hence his sudden invisibility to himself--it is as if he must seek his own true image, the proof of his corporeal existence, in the eyes and reflections about him, which give himself back to himself with varying degrees of distortion...") He lives with this strange condition but at the story's end his son succumbs to the same condition; being "of a more artistic nature", he commits suicide. The story clearly drew on Plath's own breakdown and attempted suicide at college three years earlier, but both stories were also written with the black humour that would later characterise The Bell Jar: "It must be funny, but terribly serious."

The letter also touches on her daily life in Cambridge, her wish to drive herself by hard work through the year, her lack of interest in university social life ("...I talk only to cows and swans..."), and the intensity of her feelings for Hughes: "I think if anything ever happened to you, I would really kill myself".