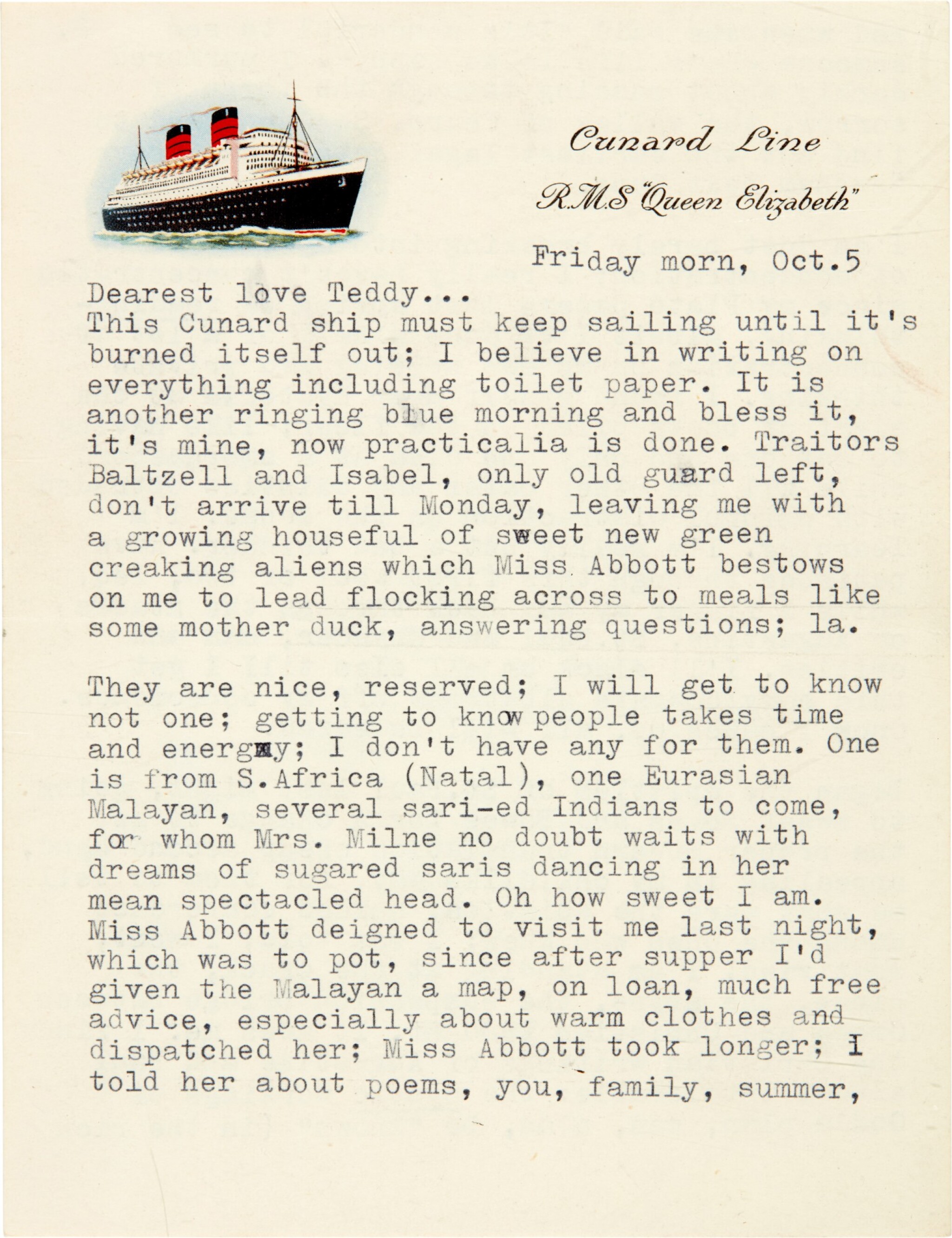 discussing religion and belief, her reading of St Paul's Epistles, scepticism about Christian faith ("...the whole tone of Christian writings is so full of assurance - one can see the appeal here, the assurance of immortal life, reward and redemption, in contrast to the wistful hazardings of my dear Socrates...") and Paul's emphasis on celibacy, her own personal beliefs, also commenting on a story plot and a poem that Hughes has sent her, and in return sending him the poem 'Touch-and-Go' ("Sing praise for statuary...", in three eight-line stanzas), with occasional autograph corrections and a 5-line autograph postscript, 8 pages, 8vo (174-77 x 133-40mm), the final leaf on blue writing paper, RMS Queen Elizabeth headed stationery [but Whitstead, Newnham College, Cambridge,] 5 October 1956

"...Now I, in my pagan earth-mother way, glorify God through the flesh; through your flesh; and through our multitudes of unborn children. I find it horrible to cut the flesh from the soul and starve it, for thus it loses its roots in the earth and in turn starves the soul..."

AN IMPORTANT LETTER IN WHICH PLATH EXPLAINS "MY OWN PRIVATE DOCTRINE". She writes of her dislike of the Christian disavowal of the flesh and also conceptions of god that she had found in the Epistles of Saint Paul:

"...I find God hideously conceited; every time you want to argue with the apostles, the saints, about the origin of evil (my favorite black sheep which even drove Augustine almost wild), they blind you with some hocus-pocus about God's inscrutability; having cake of doctrine but refusing to impart heavenly recipe for lesser cooks. God seems too often a rat--that same distaste I felt in reading Paradise Lost where God is such an egomaniac..."

These thoughts came to Plath as a result of her focus on the new academic year. The reason for her presence in Cambridge became clear as she began to "finger my way back through the stacks of Augustine, St. Paul and Chaucer". Her intellectual excitement at her reading is palpable in this letter. St Paul was unpalatable but awe-inspiring, and she responded to the poetry of his language with more sympathy than to his ideas ("...Certain words in the bible are like lovely clear sustaining water...").

This letter provides a fuller insight into the deep collaboration between the two young writers. Plath writes out another new poem for Hughes's response, 'Touch-and-Go'. The poem is here untitled and contains several textual variants from the published text. She also writes enthusiastically about an outline of a story that Hughes had sent her in his latest letter ("...I leapt into the characters psychological problems right off..."). She also returns once again to the New Yorker's predilection for nature poems. Nature was of course a central subject for Hughes, and she was evidently eyeing up the magazine's suitability for her husband's work, but Plath understands that his poems are very different from those in the magazine ("...they want no blood and guts, just goldenrod and wistful crayfish...")