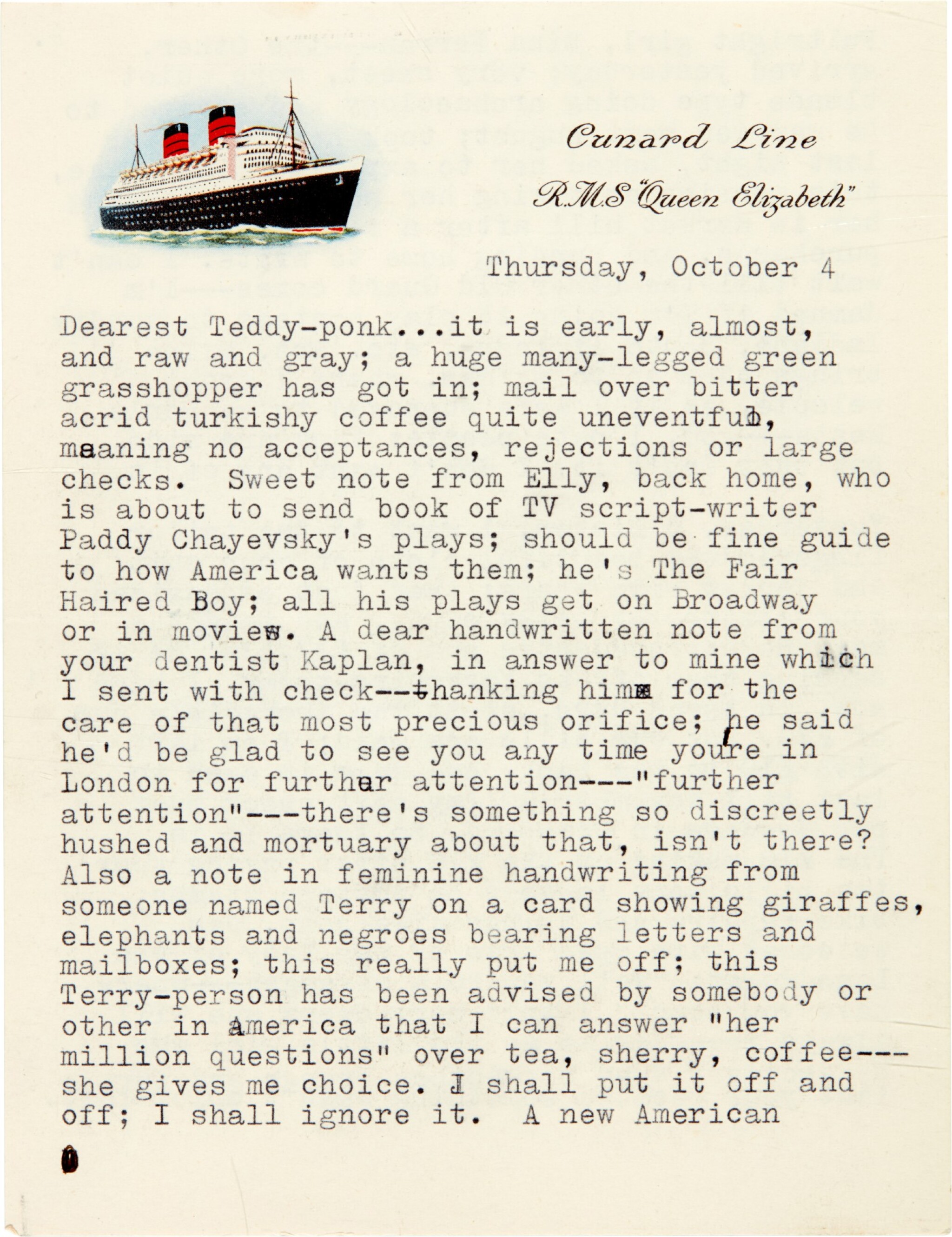 on the composition of her poem 'Monologue at 3 AM', which she sends to him for comment ("...Wrote a bad fourteen line poem last night; will probably write many such, bad because they are naked and do not have the sophistication of technique which cares how it says more than what it says; you must criticize coldly, even if you know if it is all about you and done in such simple love..."), also describing how the college is beginning to fill as term commences, her meeting with "a new American Fulbright girl", the weakness of the latest New Yorker, and the pain of his absence, occasional autograph corrections, 5 pages, 8vo (174 x 134mm), RMS Queen Elizabeth headed stationary [but Whitstead, Newnham College, Cambridge,] 4 October 1956

"...I feel terribly miserable and noble; like learning to live without legs and arms and with mechanical intestines after some colossal operation which nobody really thought I'd come out of; I'll never stop this incredibly overpowering sense of absence; I'll just learn to wall it up in a series of bare enormous rooms, which I don't enter except when I'm alone; all the rest is rot..."

SYLVIA PLATH ON THE COMPOSITION OF HER POEM 'MONOLOGUE AT 3 AM'. This was the first poem completed by Plath after her return to Cambridge. Whilst in her letters she promises renunciation and writes of her attempt to deal with her husband's absence by cutting herself off from her emotions, the poem's violent imagery expresses an alternative: "Better that every fiber crack | and fury make head [...] than to sit mute, twitching so | under prickling stars".

She writes of her dissatisfaction with the New Yorker: "the poems, I have cold-eyedly discovered, are all weak". Even 'Sestina' by Elizabeth Bishop is sentimental, and James Thurber's latest offerings "have a false ring, sort of singsong prose". This is the iconoclasm of a writer who knows that she is finding a voice that marks a new generation. In the background, quotidian life in Cambridge continues: new students from around the world are arriving and a reluctant Sylvia Plath is enlisted to show them around; she meets the "Lady of the Laundromat" for the first time since her return; she arranges for Ted Hughes's new suit to be sent up to Yorkshire.