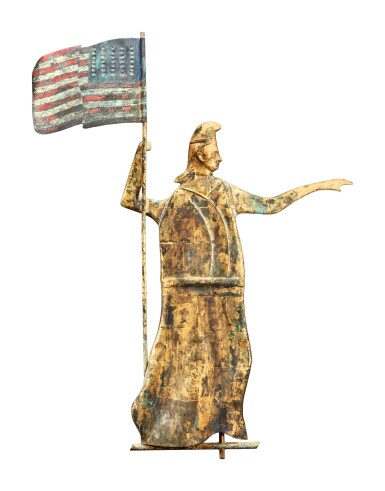 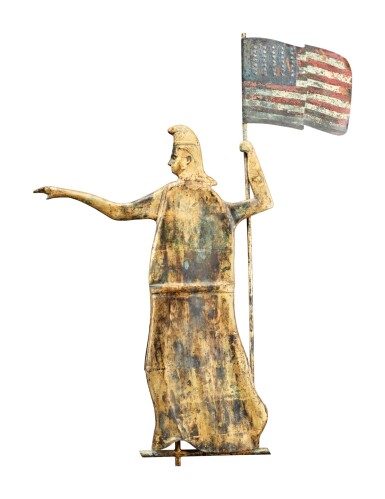 Rubbing and losses to the gilt and paint decoration. Signs of verdigris. Areas where gilding has been refreshed. Minor separation at seams.

To request information about the condition of this lot or condition photographs, please contact 212-606-7130 or Americana@sothebys.com.

Beginning about 1865, weathervane manufacturers marketed designs that appealed to the patriotic and expansionist spirit, and several versions of the Goddess of Liberty weathervane were produced through the turn of the twentieth century. Most exhibited common features, combining classical garb, a Phrygian cap, and an American flag. In ancient Rome the Phrygian cap was worn as an emblem of freedom by ex-slaves, and in France revolutionaries adopted the wearing of Phrygian caps after the storming of the Bastille, which accounts for its symbolic importance in American. In this Liberty weathervane, the goddess wears a Phrygian cap, and her pointing hand indicates wind direction, but it also symbolically directs the nation forward, advancing the course of empire.1 A similar example is in the Jane and Gerald Katcher Collection at the Yale University Art Gallery.2

﻿1 Richard Miller, “Folk Sculpture: For Diversion and Utility,” in Expressions of Innocence and Eloquence: Selections from the Jane Katcher Collection of Americana, edited by Jane Katcher, David A. Schorsch and Ruth Wolfe, (Seattle: Marquand Books in association with Yale University Press, 2006), p. 237.