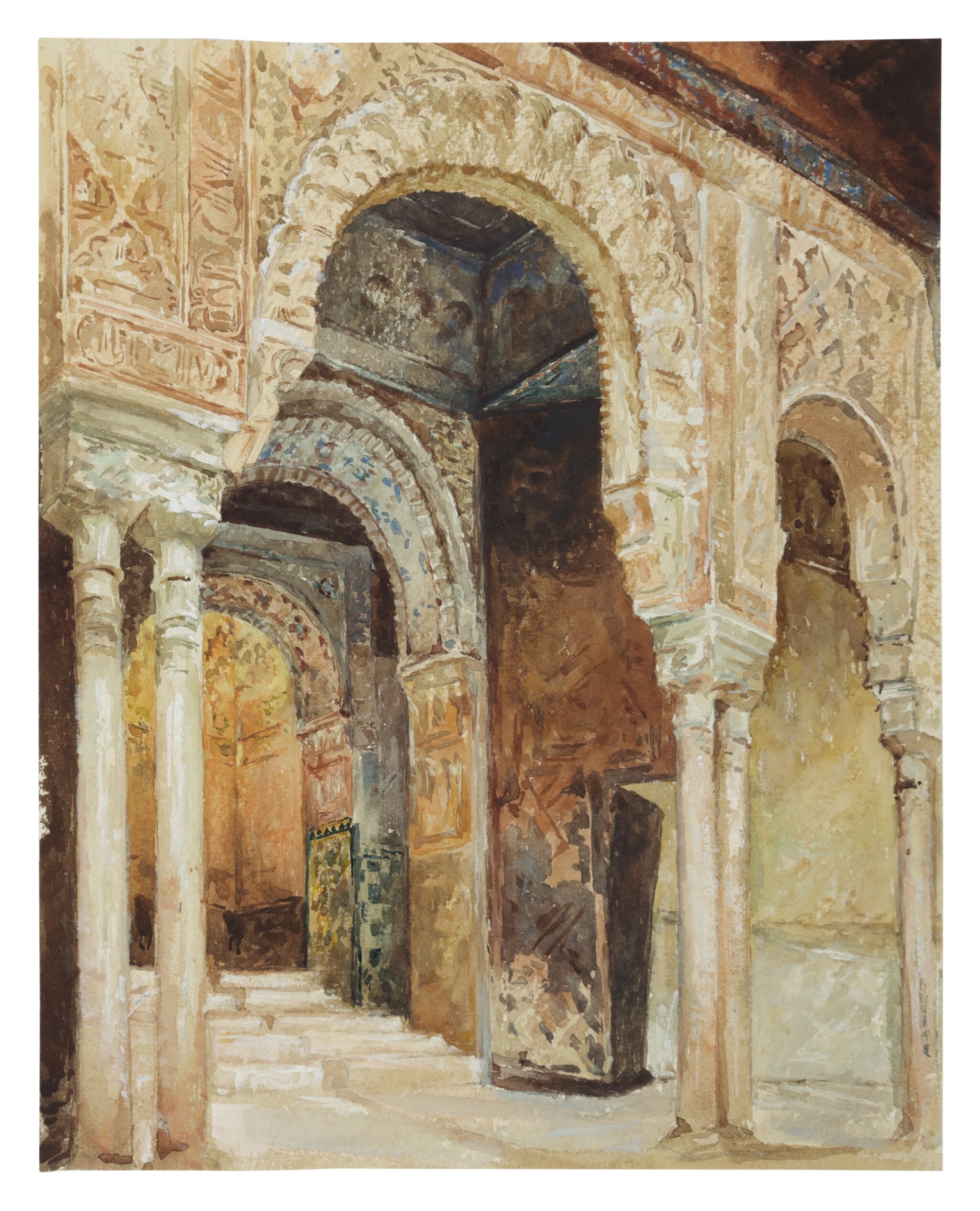 gouache, watercolor and pencil on paper

We wish to thank Dr. Roberta A. Mayer and Mr. Paul Doros for their assistance in cataloguing this lot.

The sheet is very lightly toned throughout. There are tape remnants from a previous mounting in each extreme outer corner. There appear to be a few scattered pindots of possible foxing.

Private collection, Boston, Massachusetts
Acquired by the present owner from the above, 2014
We are grateful to Dr. Roberta A. Mayer for preparing the following essay:

In 2012, Sotheby’s sold a masterful work by Louis Comfort Tiffany (1848–1933) then titled Arches in Alhambra, which captured an interior view of the famous Moorish palace in Granada, Spain. Rich in color and infused with architectural texture and warm light, this watercolor and gouache painting with dimensions of 13 ¾ x 10 ⅞ inches had descended through the Tiffany family. Although it did not appear to have a signature, it was annotated in Tiffany’s hand as a “copy of a watercolor by …” followed with an illegible name that was thought to be “Raguet.” Further research presented here has revealed this name to be Regnault. In fact, Tiffany’s watercolor was a copy of The Alhambra, Granada: Entrance to the Hall of the Sisters (c. 1869) by the young French artist Henri Regnault (1843–1871), who, like Tiffany, was attracted to Spain and Morocco. Regnault’s painting, approximately 24 x 19 ½ inches in size, had been purchased by the Louvre Museum in 1872 following his tragic death in the Franco-Prussian War. Tiffany’s copy was on a smaller scale, and although it was not dated, the records indicate that it was exhibited at Tiffany’s 1916 Retrospective Exhibition with the title Copy of Study of Alhambra and a date of 1874.

A second watercolor and gouache copy of Regnault’s same painting with dimensions of 14 ½ x 11 ⅝ inches, has been identified in which the entrance arch is slightly compressed and that work is offered here. Based on the careful examination of high-resolution digital images and through further consultation with Tiffany scholar Paul Doros, we believe this second copy could have been a slightly earlier attempt by Tiffany during his 1874 visit to the Louvre to capture the essence of Regnault’s work. Previously framed on the reverse and now accompanying the present work is a separate sketch of trees which was executed on brown, textured, commercial wrapping paper of the sort that Tiffany often used for his early watercolors.

Tiffany’s earliest ideas about the Alhambra came from the American author (and summertime neighbor of the Tiffany family) Washington Irving (1783–1859); the English designer and architect Owen Jones (1809–1874); and Tiffany’s close friend and mentor, the American painter Samuel Colman (1832–1920). Tiffany wanted to visit the Alhambra during his 1870–1871 trip to Spain, Morocco, and Egypt with the painter R. Swain Gifford (1840–1905), but that destination was ultimately thwarted by fear of contracting Yellow Fever. In 1874–1875, Tiffany was again overseas, and his itinerary included a stay in Paris. There, he clearly visited the Louvre Museum and spent time carefully copying the work of Regnault. By the end of 1874, Tiffany with his pregnant wife and young daughter settled in the French Riviera town of Menton (known as Mentone when it was part of Italy) to prepare for the arrival of a second child. Interestingly, the trees in the aforementioned sketch could be part of his studies for his later oil painting titled A Mountain Path – Mentone, France.

Tiffany finally made it to the Alhambra during his 1875–1876 trip, which included an extended stay in Algeria. By then, Tiffany had also begun to explore the decorative arts, and the plasterwork of the Alhambra inspired his own experiments with cast plaster inlaid with glass and highlighted with reflective paint as seen in the 1879 “Moresque” salon that Tiffany designed for New York pharmaceutical millionaire George Kemp. Decades later, in May 1911, the famous Spanish artist Joaquín Sorolla y Bastida (1863–1923) painted Tiffany’s portrait, and Tiffany apparently returned to the Alhambra that year, a visit that sparked several new oil paintings and watercolors.