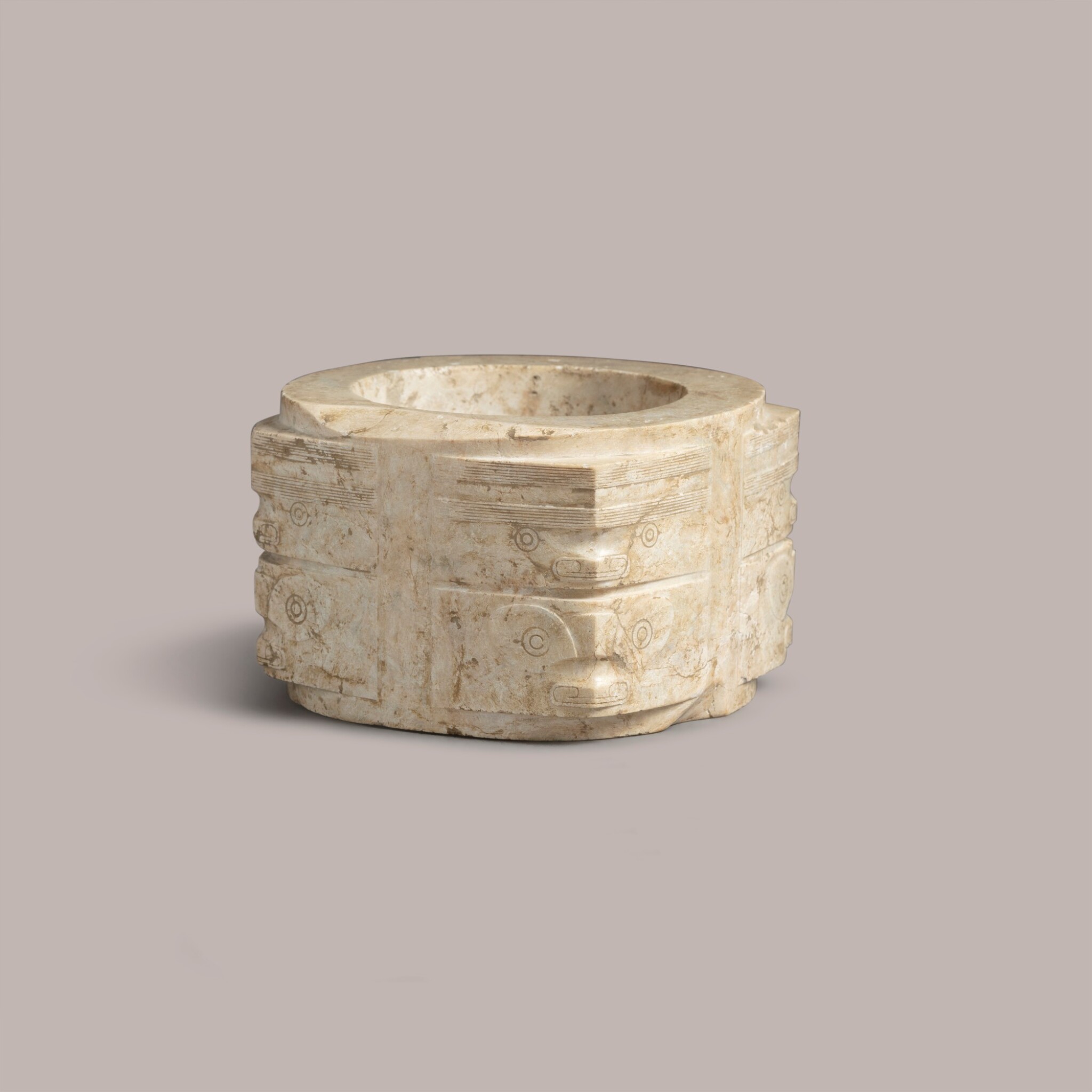 of short cylindrical square section, each corner carved with a stylised human and animal mask design, the faces divided with a gently recessed vertical band in the centre of each side, the opaque stone of chalky-white tone suffused with russet inclusions

The tone of the Cong is slightly warmer than illustrated online.

The present piece represents one of the archetypal jade artefacts from the Liangzhu culture (c. 3300-2300 BC). Cong, typically with a square outer section around a circular one inside, remain among the most enigmatic objects from ancient China. Excavated in various forms and sizes from archaeological sites in southeast China, they appear to have served some important ritual or ceremonial purposes among the elites of this early society, who possessed enough wealth and power to command their production. Some of these jade cong, such as the present lot, were originally green; the soft white colour is the result of calcification after being in the ground for thousands of years.

The stylised faces at the corners and the pairs of bulging eyes are characteristics of the jade cong created at the time. See three closely related examples; a slightly taller cong, excavated from Yaoshan, Yuhang, Zhejiang province, now in the Yuhang Museum, Hangzhou, included in the exhibition Liangzhu yu gudai Zhongguo: Yuqi xianshi de wuqian nian wenming / Liangzhu and Ancient China: The 5,000-Year Civilization Demonstrated by Jades, Palace Museum, Beijing, 2019, cat. no. 9; a wider one with a somewhat rough top, excavated from Tomb No. 12 at Yaoshan, also preserved in the Yuhang Museum, illustrated in Gu Fang, The Complete Collection of Unearthed Jades in China, vol. 8: Zhejiang, Beijing, 2005, p. 107; and a calcified piece of slightly smaller size, excavated from Fuquanshan, Qingpu, Shanghai, now preserved in the Shanghai Museum, included in the exhibition Gems of Liangzhu Culture: From the Shanghai Museum, Hong Kong Museum of History, Hong Kong, 1992, cat. no. 55. Two other closely related pieces were recently sold at auction: one at Bonhams Hong Kong, 29th May 2018, lot 4; and a smaller one at Christie’s Hong Kong, 30th May 2018, lot 3080.

Compare also two related cong, decorated with additional patterns such as scrolling clouds between the upper two horizontal bands, both preserved in the Zhejiang Provincial Institute of Cultural Relics and Archaeology, illustrated in Gu Fang, op.cit., one excavated from Tomb No. 20 at Fanshan, Yuhang, Zhejiang province (p. 77); the other excavated from Tomb No. 2 at Yaoshan (p. 106).