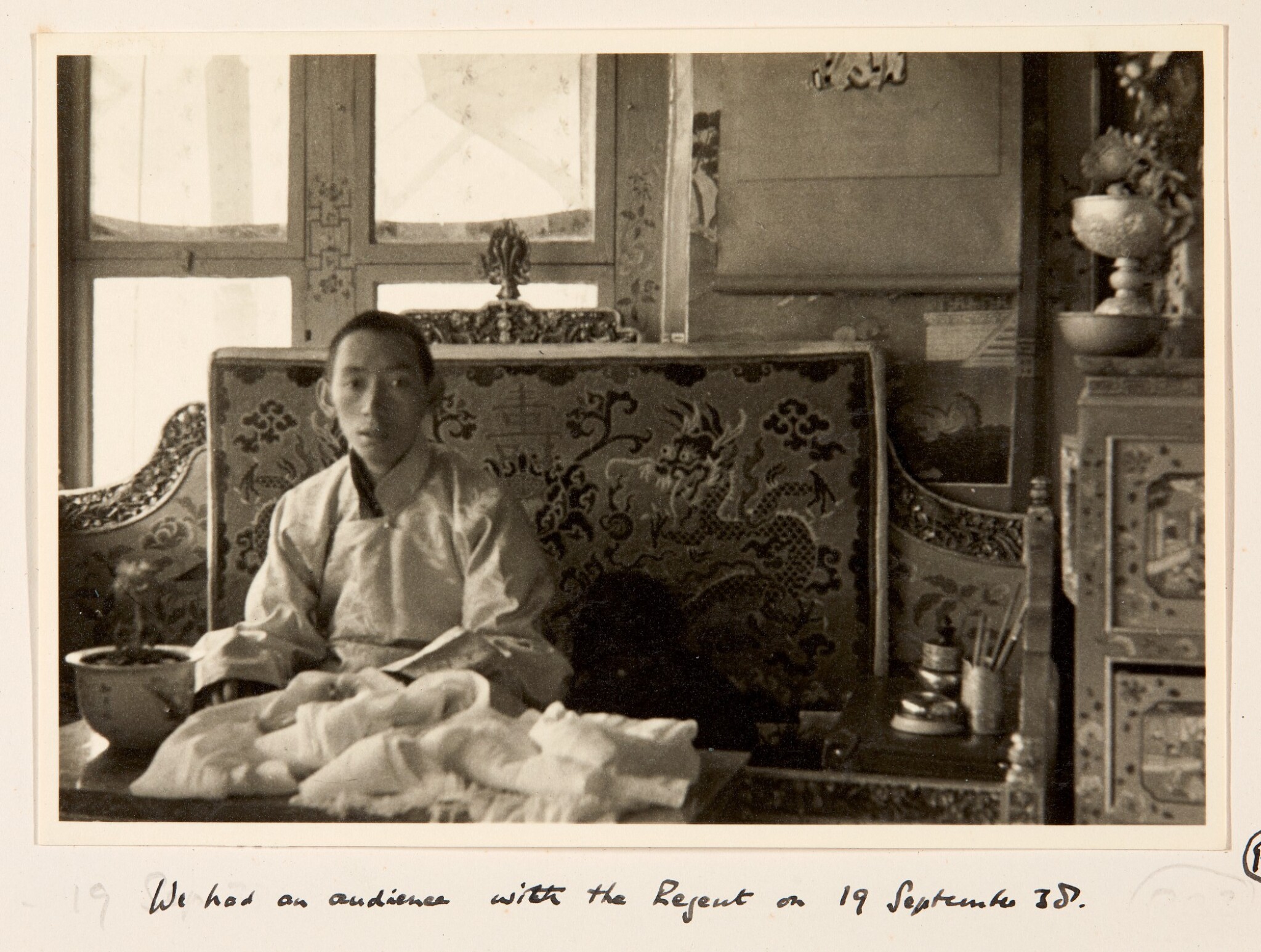 Two photograph albums titled "A visit to Lhasa by Lieut. A.F.M. Jack and Captain J.K. Shepheard, August to October 1938", together with a related map, documents and camera.

Two photograph albums, oblong folio (305 x 385mm.), 478 matt SILVER PRINTS by Shepheard and Jack, comprising 455 prints (105 x 140mm., or the reverse, one loose), 19 panoramas formed of 2 or more prints (3 folding), and 4 larger prints (210 x 150mm., or the reverse), mounted on thick card, recto and verso, mostly 4 to a side, manuscript descriptions by Shepheard throughout in pen and ink over pencil, contemporary tree calf, bindings slightly rubbed

Modern transcript of Shepheard's private diary and notes on the expedition, 67 pages, bound

Shepheard's Zeiss Ikon 520 folding camera with leather case—Two envelopes with Tibetan stamps (one mailed by Shepheard to himself from Lhasa), and one manuscript document in Tibetan

Mess bill, for the expedition with attached Tibetan receipts

RARE UNSEEN PHOTOGRAPHS OF TIBET AND LHASA by Capt. Ken Shepheard and Lt. Archie Jack of the Royal Engineers documenting their visit in 1938, comprising SHEPHEARD'S PERSONAL ALBUMS OF PHOTOGRAPHS, CAMERA, RELATED DOCUMENTS, and a copy of his diary.

In 1938 Shepheard and Jack were serving in India with the Bengal Sappers who had the right of inspection of the Indian Army garrisons at Yatung and Gyantse in Tibet. Jack had volunteered and been accepted to conduct an inspection, and invited Shepheard to join him, and to help survey possible routes for motor transport into Tibet. Jack had been educated at Rugby, where Younghusband had sponsored four Tibetan boys during the First World War; Jack thought he might be able to use these Tibetan contacts to get permission to visit Lhasa. They sent a request to Lhasa, but set out from Darjeeling without knowing what their movements beyond Gyanste were going to be, in a fleet of Austin 7s for Gangtok; unsurprisingly the road conditions soon made them switch to ponies and foot for the rest of their epic journey. After a long wait Shepheard and Jack eventually received permission for a ten-day visit to Lhasa where they were warmly received by Tibetan officials and the Regent, with whom they had an audience, and who let them take his photograph. During their stay in Lhasa they also met the Prime Minister, the Rugby-educated Tibetans, and many lay and religious officials.