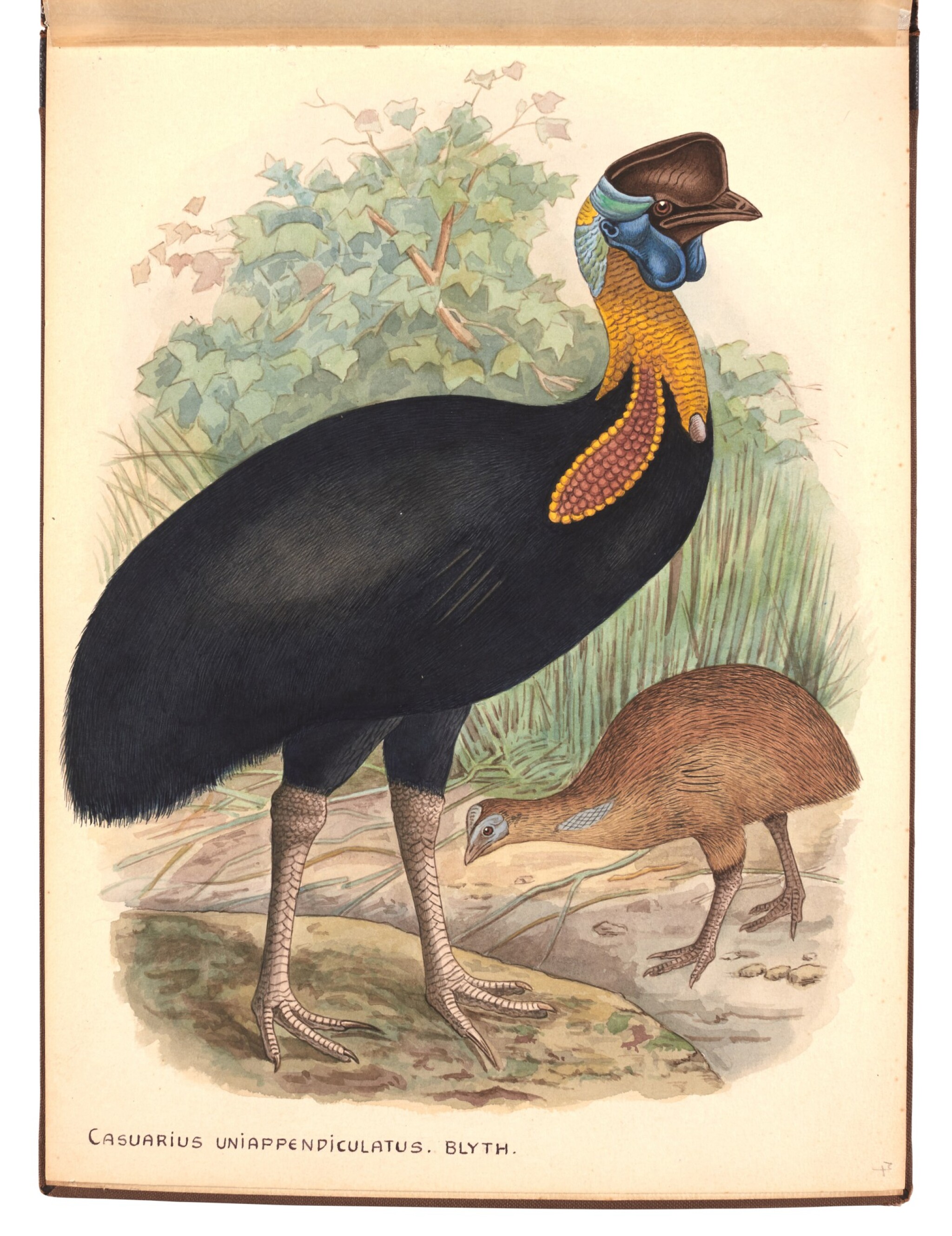 Oblong octavo (212 x 285mm.), black ink calligraphic manuscript title, manuscript map in blue ink of New Guinea, northern extremities of Australia and the surrounding islands, hand-coloured with a related key beneath to show the distribution of the various species and sub-species, 7 plates of pen-and-ink and watercolour drawings by Keulemans of various species of cassowary (the first five plates each with three heads, the sixth plate with two heads and the final plate with a fine full-length study of an adult and a young bird), loosely inserted is an early manuscript listing (in the same hand as the captioning of the plates and the index to the map) of various species of the bird, with common names and locations, contemporary brown morocco-backed cloth-covered boards, dark red morocco box

PRE-PUBLICATION PRESENTATION MANUSCRIPT WITH WATERCOLOUR DRAWINGS depicting the 17 species or sub-species of cassowary identified by Rothschild in his "Monograph of the genus Casuarius" published in 1900.

In December 1900, Walter Rothschild published his seminal work on the cassowary in the Transactions of the Zoological Society, which included exquisite plates by John Gerrard Keulemans. The manuscript title of the present album, however, is dated the year prior.

Keulemans worked from the live birds housed in Lord Rothschild's private menagerie at Tring and travelled to Germany to sketch the live specimens at the Zoological Gardens of Berlin. This, allied with Otto Fockelmann's name on the title may provide the most likely explanation for the existence of this unique pre-publication manuscript. Rothschild was scouring the world for any species or sub-species that had escaped his notice. The Fockelmanns were well-known dealers in rare birds, based in Hamburg, and they would have been contacted to ask if they could help, perhaps by Keulemans at Rothschild's request during one of his trips to Germany.

Before the publication of the monograph, the original watercolours were the most accurate method of recording the species that Rothschild had already identified, and the present images may, in part, have been produced to allow the Fockelmanns to eliminate them from Rothschild's "shopping list". The Fockelmanns were evidently much taken with the drawings, as it seems likely that they were responsible for its current final form: with a German title, a map with German place names, and a loosely inserted index (with Rothschild's name spelled incorrectly, and notes in German) with additional species which had been identified by Anton Reichenow added in 1913.