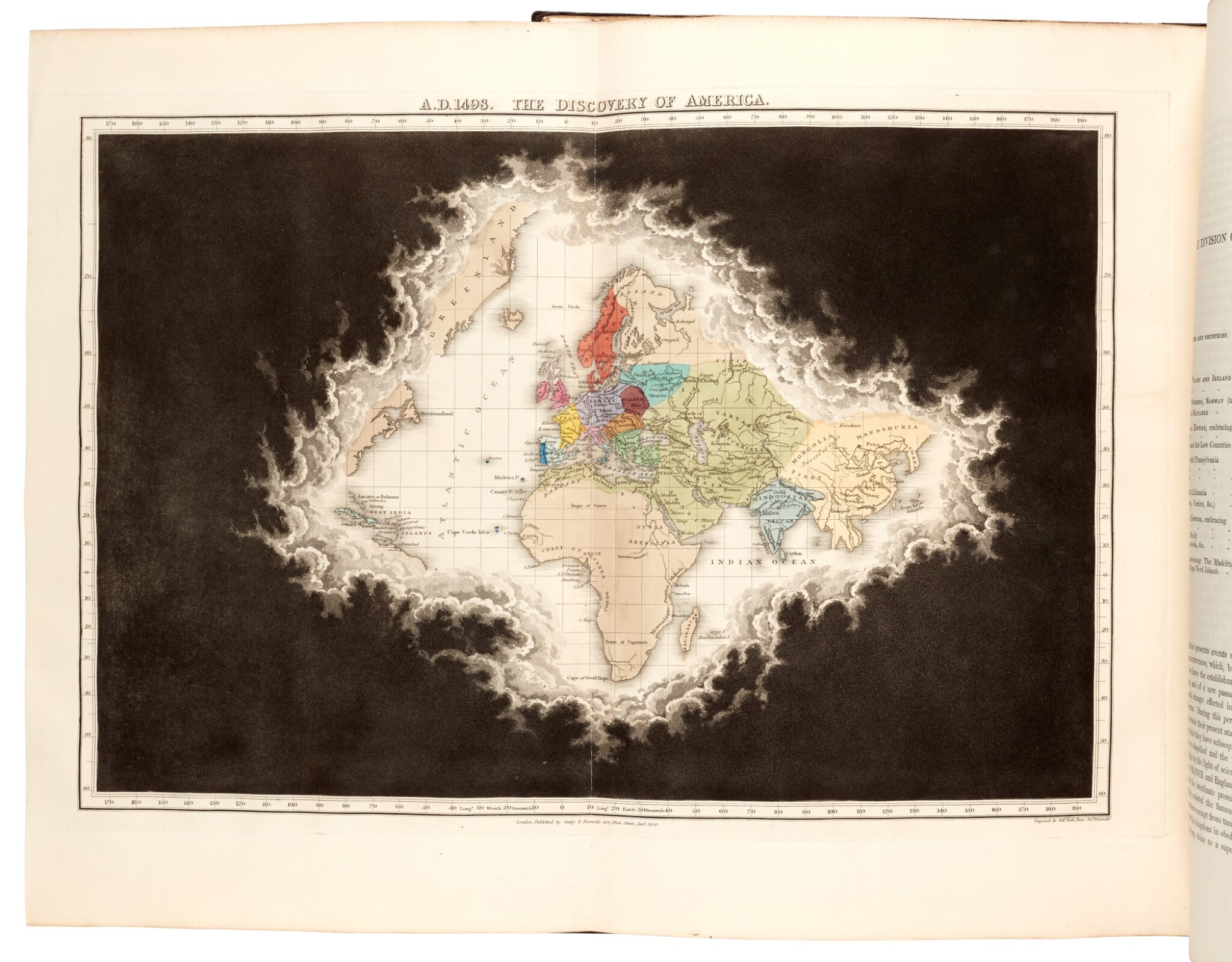 An Historical Atlas; in a Series of Maps of the World as known at different periods; constructed upon an uniform scale and coloured according to the political changes of the period. London: Printed for R. B. Seeley and W. Burnside, 1830

ONE OF THE MOST UNUSUAL ATLASES OF THE NINETEENTH CENTURY.

Intended to show cartographically political change from the time of creation to the year 1828, this rare atlas depicts the world from the perspective of the heavens, with parts unknown shaded with black clouds which recede through the course of history, revealing the enlightened world in the midst of the Industrial Revolution. The Preface explains: "[The atlas] consists of a succession of maps exhibiting the state of the known world at more than twenty periods. Its peculiarity consists in exhibiting every thing in its real dimensions and just proportions, and in adhering to the scale in all successive delineations... By rapidly passing the eye, therefore, over the engravings the student, always the same territory in the same part the map, sees by the changes of colour the empires which succeed each other. Like the watchman on some beacon-tower, he views the hills and peopled valleys around him, always the same in situation and in form, but every changing aspect of the hours and seasons... In thus exhibiting the state of the world at different periods, it became necessary, in order to preserve consistency and truth, to exhibit in the earlier stages of the review only very small portion of the earth's surface... The only course left to us seemed to be, to bring the appearance of a cloud over the skirts of every map, exhibiting at each period only the known parts of the globe, and lifting up or drawing off this cloud as the limits of the known world gradually extended. Every successive map thus combines, at a single glance, the geography and the history of the age to which it refers; exhibiting by its extent the boundaries of the known world, and by its colours the respective empires into which that world was distributed".

Divided into twenty-one periods beginning with "B.C. 2348 The Deluge " to "A.D. 1928 At the General Peace" the clouds fully disappear at the nineteenth period: "A.D. 1783 At the separation of the United States of America, from England".