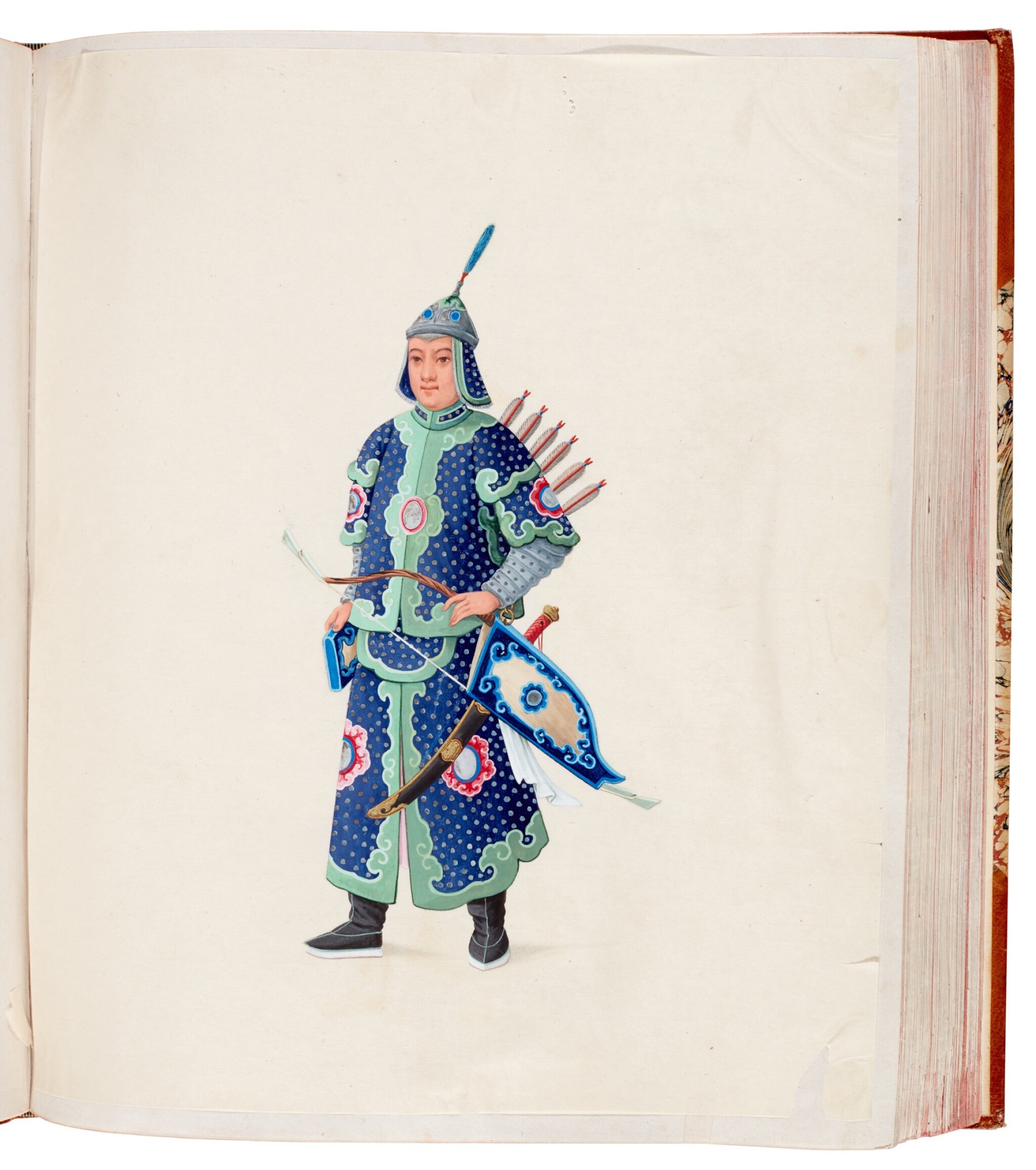 An album of watercolours of members of the Chinese court and of various tradesmen and occupations. [Canton: circa 1800]

Large 4to (380 x 317mm.), 141 watercolours, on thin paper, nearly all captioned in ink in Chinese in the lower right corner, each tipped to a sheet of wove paper, mid-nineteenth-century citron half morocco over marbled paper covered boards, spine with raised bands in six compartments, lettered in gilt in the second compartment, the others with a repeat decoration in gilt, marbled edges, a few repaired tears

AN EXTRAORDINARY ALBUM OF EARLY CHINESE EXPORT WATERCOLOURS OF THE HIGHEST QUALITY.

Beginning in the late eighteenth century, centred on the treaty port of Canton, there existed a thriving trade in ethnographical watercolours executed by local Chinese artists and sold to the western merchants and travellers. The best known result of this trade is William Mason's Costume of China, first published in London in 1800, which is illustrated with 60 hand-coloured aquatints adapted from a series of original watercolours by Pu-Qua of Canton. It was common for the local artists, including Pu-Qua, to work from a set series of models. The present album includes a number of compositions that are from the same set of models as those used by Pu-Qua, but they include more detail and more of the trade-associated paraphernalia than are shown in the images as published in Mason's work. This suggests that they were not copied from Mason but were after another more detailed source, or were unique compositions by the artist based on a similar series of models.

Importantly, these watercolours are of a uniformly higher quality than usually encountered and represent not only a wide array of occupations but also members of the highest echelon of Chinese society. The detailing on the costumes worn by these members of the royal court is breath-taking, with copious use of gilt. Later collections of Chinese export watercolours were routinely executed on less expensive pith paper, whereas the present watercolours are on high quality tissue and are larger in size than those typically encountered. The album represents an earlier, more prestigious style of export watercolour paintings specifically meant for wealthy Europeans. These are Chinese watercolours of the highest quality, designed and executed to the highest standards.