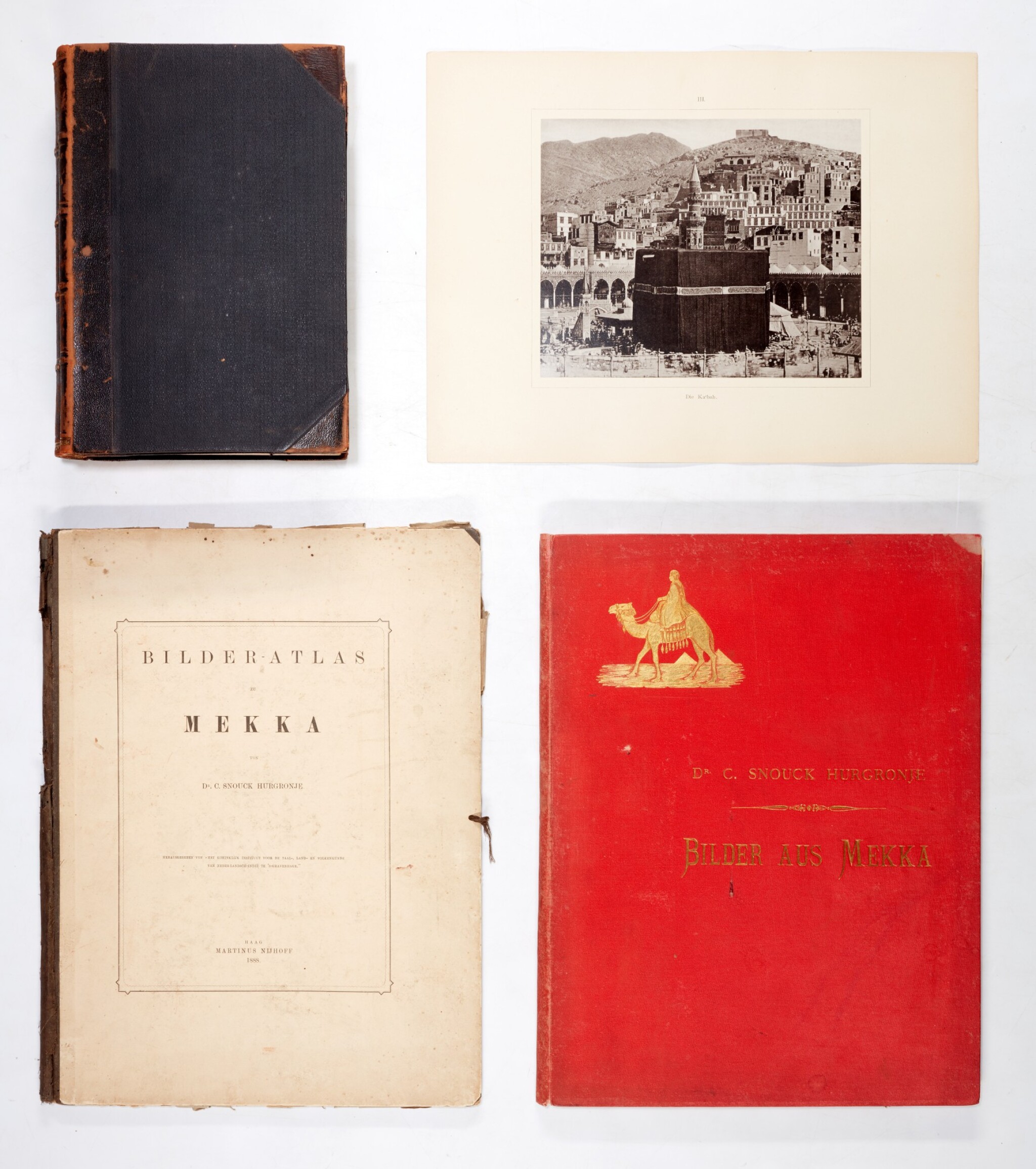 Bilder aus Mekka: half-title, title, 2 leaves of text, 20 collotype photographs mounted on 18 numbered leaves, text and plates loose as issued, original red cloth portfolio, upper board titled in gilt with gilt stamped vignette of a figure on a camel with pyramids in the background, light spotting, title and text leaves frayed at inner edge (not affecting text), occasional minor stains or wear to edges of mounts, covers rather marked and stained

A RARE SET OF HURGRONJE'S IMPORTANT PHOTOGRAPHIC MONOGRAPHS ON MECCA AND THE HAJJ, INCLUDING THE SCARCE "BILDER AUS MEKKA" PORTFOLIO OF PHOTOGRAPHS.

Snouck Hurgronje was a respected Dutch orientalist who converted to Islam and spent the years 1884 to 1885 living in Mecca and assumed the name Abd al-Ghaffar. On his return to the Netherlands, he published a history and details of life in Mecca which was published with a portfolio of photographs Bilder-Atlas zu Mekka in 1888-89. Compiled on the eve of the modernisation of Arabia, this landmark work is the largest single illustrated monograph on Mecca of its time. The first text volume contains an historical survey of Mecca, the second describes the daily life of the inhabitants, based partly on the notes compiled by Snouck Hurgronje's Muslim informant from the East Indies, Abu Bakar Djajadinigrat. The plates are among the earliest published photographs illustrating Mecca and pilgrims from all parts of the Islamic world. The photographs were taken by Snouck Hurgronje, and Al-Sayyid Abd al-Ghaffar, a doctor in Mecca who was taught photography by Snouck Hurgronje in 1885.

Encouraged by the success of this publication, Snouck Hurgronje went on to publish a further set of photographs in 1889, titled Bilder aus Mekka. "[With these two works] Hurgronje has given us a rare and unique archive of photographs of the Hijaz, and of Makkah in particular... The photographs provide an insight into the world of Mecca's inhabitants, pilgrims from all over the Islamic world, in addition to the sharif of Makkah, the Turkish governor, and various religious and secular figures" (Badr el-Hage, Saudi Arabia Caught in Time, pp.43-46). See also Arnoud Vrolijk and Richard van Leeuwen, Arabic Studies in the Netherlands, 1580-1950, pp.117-150.