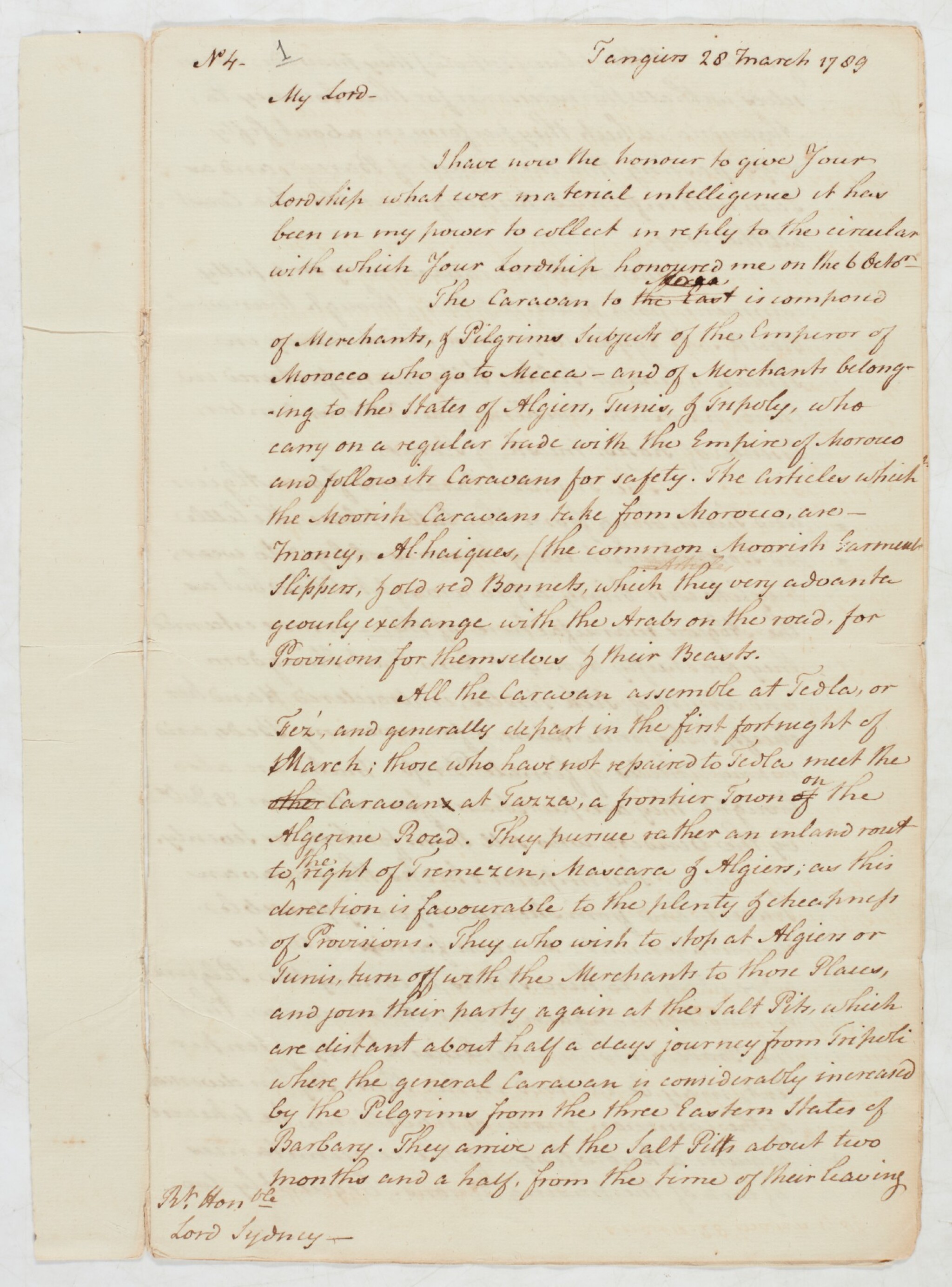 describing the departure of pilgrims on the Hajj ("...The Caravan to Mecca is composed of Merchants, & Pilgrims subjects of the Emperor of Morocco who go to Mecca - and of Merchants belonging to the states of Algiers, Tunis, & Tripoli, who carry on a regular trade with the Empire of Morocco and follow its Caravans for safety..."), detailing the route followed by the caravan, the extensive trade carried out as the pilgrims travel past Tripoli, through the desert to Alexandria ("...At Egypt they invest their money in Persian & Levant silks, Silks manufactured in Cairo, Raw Silk, muslins, fine Cottons, Amber, Essence of Roses, Musk, & Stora..."), and explaining the control maintained over the pilgrims by the Ottomans from Alexandria onwards, then continuing with detailed intelligence on other aspects of Moroccan society, politics, and commerce, with one pencil annotation (querying Matra's claim about the size of the Moroccan army) and copy signature in pencil, 9 pages, folio (Britannia watermark), Tangier, 28 March 1789, contemporary docketing, splitting at folds

A RARE EARLY EUROPEAN ACCOUNT OF THE HAJJ, AND A WELL-INFORMED SURVEY OF EIGHTEENTH-CENTURY MOROCCO.

"...The Arabs, or the Inhabitants of the Country, in its mountainous parts, fix their Tents in the most inaccessible heights. In the Plains from ten, to forty Families form a Village, they cultivate Grain, and a few fruits & vegetables. They remain in one spot, till its natural fertility and Plenty are exhausted, or till the Alcaide grows too extorting and oppressive, they then remove to some distant quarter. Hence you may travel by a road, each side of which is crowded with Arab villages: if you pass the same way a month after not a vestige of them may remain..."

This report was written shortly after the great caravan to Mecca had begun its long journey from Morocco. It emphasises the commercial opportunities provided by this annual pilgrimage of tens of thousands of the Islamic faithful, then continues with an account of Morocco under Sultan Mohammed III. Matra describes a land of large cities built on trade, but where the rural population was mostly nomadic and the Sultan's power limited. He details Morocco's close link with Timbuktu and its crucial role in trade with the African interior, the range of goods traded into Timbuktu in return for "Gold Dust, Slaves and Gum". He comments that the trade with the interior has been in long-term decline as a result of decrease in the number of slaves imported to Morocco, which he estimates at 3000-4000 slaves annually. He does not mention the reason for this decline, which was surely the inexhaustible appetite for slaves in Europe's colonies in the New World. The trans-Atlantic slave trade was at its height, and up to 100,000 Africans were transported to the Americas every year.

The author of this letter was James Mario Matra (1746-1806), who had been appointed British Consul at Tangier in 1786. Matra, who was born in New York, had accompanied James Cook on his first voyage to the Pacific and later became a leading proponent of the plan to establish a convict colony at Botany Bay. His correspondent was Thomas Townshend, First Viscount Sydney, who was the cabinet minister principally responsible for the colonisation of New South Wales. No other copy of this letter is listed as being among Sydney's papers in the Clements Library at the University of Michigan. This copy, although not signed by Matra, may well have been produced at his instigation: the uncertainties of international post meant that it was common practice at the time for diplomats to send duplicates of the same letter by different routes to increase the likelihood that at least one copy would find its way to its recipient.