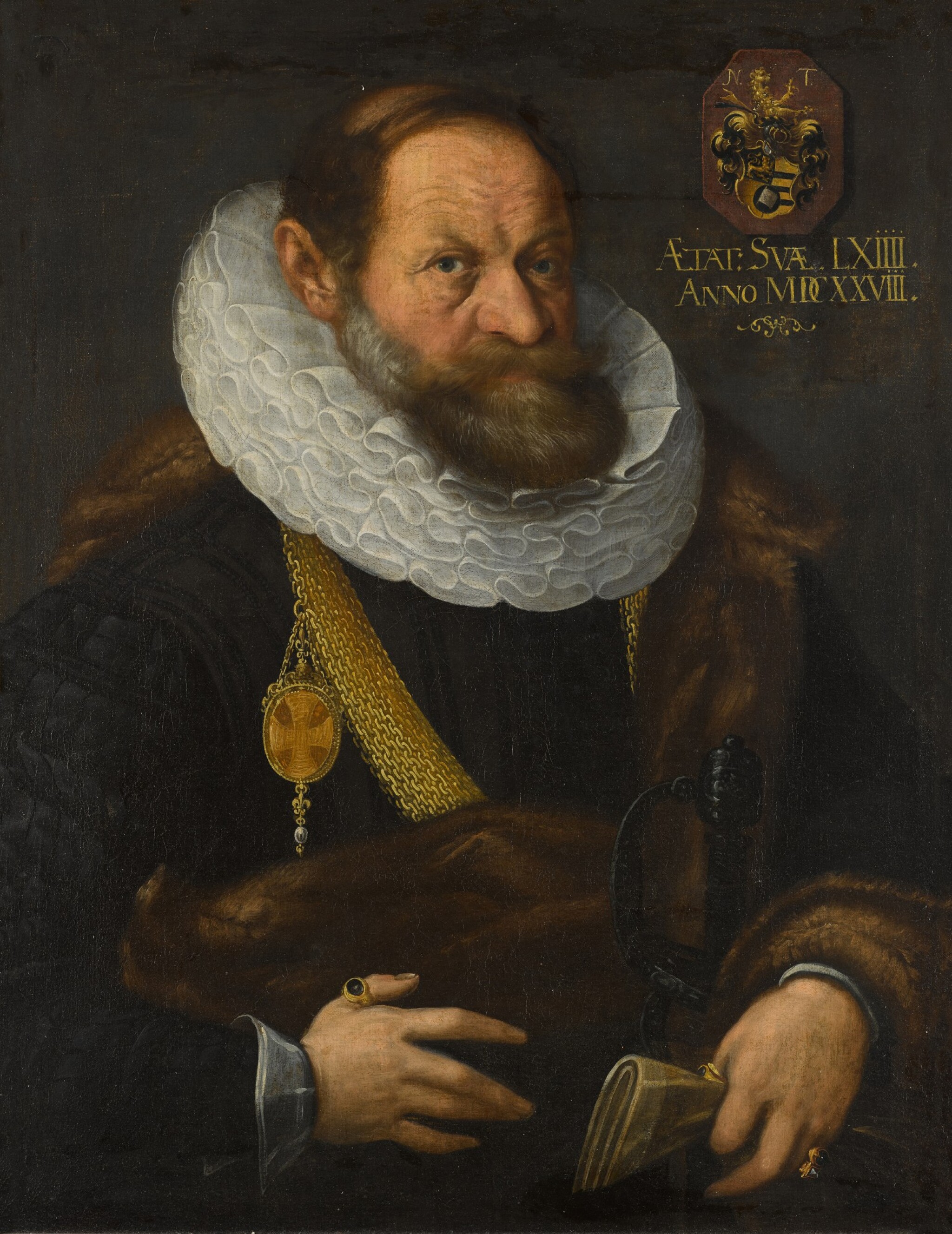 The canvas is lined, and the paint surface is relatively dirty with a relatively discoloured varnish. There is visible retouching along the upper margin, and to a repaired horizontal tear between the sitter’s forehead and the coat of arms (approx. 15cm. long). There are further discoloured retouchings scattered throughout, notably along the margins. Inspection under ultraviolet light confirms these, and further reveals fine retouching along another horizontal repaired tear lower right (approx. 8cm.), scattered spots in and around the coat of arms and inscription, and few and tiny spots and lines in his collar and face.

This portrait may be compared with that of Georg Volckamer von Kirchensittenbach, a Nuremberg patrician and state councillor to the Duke Archbishop of Mainz, which is signed with initials by Johann Kreuzfelder (Germanisches Nationalmuseum, Nuremberg, inv. no. Gm715).1

Kreuzfelder was the son of a goldsmith, and pupil to Paul Juvenel the Elder (1579-1643), who is believed to have stayed in Rome with the artist Adam Elsheimer (1578-1610). Influences from both of these authorities may be found in the portrait in Nuremberg as well as in the present work: the soft rendering of the flesh tones and hair reflects a more Italianate style, in contrast to the sharp, minutely-rendered details of the gold chains and pendants, which betray an interest and familiarity with such objects, and likewise hark back to the German pictorial tradition of the previous generation.

Nikolaus Tritt von Wilderen, about whom little is known, was the son of Horatius Tritt (or de Triddi), from a noble family in Como, Lombardy. He was a member of the city council of Constance, and was part of the local guild 'Zur Katz', a club of wealthy merchants. He was probably married to Dorothea Oschwind. His son, Nikolaus, later became Mayor of Constance. The addition to his surname - 'von Wilder(e)n' - refers to an estate in Thurgau, Switzerland.

The pendant hanging from the sitter's gold chain is inscribed with the words: IACOBVS EPI[S]COPVS, which very probably indicates that the ornament was a gift from Jakob Fugger (1567-1626), a member of the renowned Augsburg family, and Prince-Bishop of Constance between 1604 and 1626. Nikolaus Tritt's brother, Johann Anton Tritt von Wilderen, was auxiliary bishop of the diocese from 1619 until his death in 1639.

We are grateful to Dr. Jacek Tylicki and Guido Dankwarth for their kind assistance in the cataloguing of this lot.