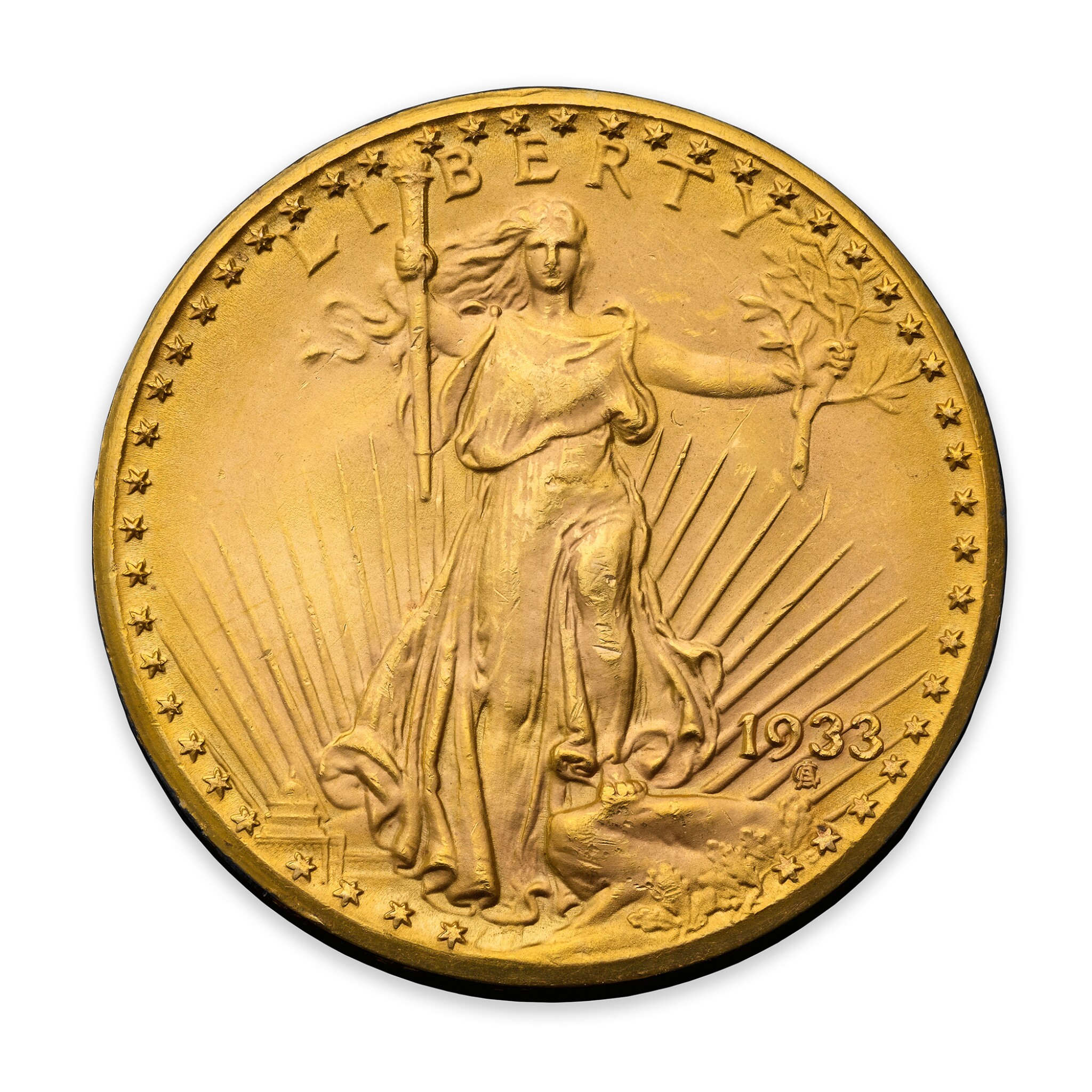 Creamy, orange-yellow surfaces with deeply frosted devices and proof-like bloom in the obverse field between the rays. A small semicircular lint mark below Liberty’s left arm, a tiny nick in the fifth ray on the left, a ‘D’-shaped mark on Liberty’s left knee, and minuscule copper-spots to the right of Liberty’s neck and to the right of the T in LIBERTY are identifiers. The reverse exhibits full cartwheel effect.

Some obverse doubling of the stars to the left, the upper part of the torch, and ‘33' in the date. The reverse exhibits a diagnostic die scratch “traversing the tip of the beak of the eagle” which is also present on the two examples in the Smithsonian.1

Sold with the unique “Certificate of Monetization” signed by Mint Director Henrietta Holsman Fore on July 30, 2002. Especially prepared by the Bureau of Engraving and Printing to accompany this coin.

IMPORTANT NOTICE REGARDING THE GRADE:

The 1933 Double Eagle is sold without having been encapsulated by a third-party grading service. However, on Monday, June 10, 2002, the 1933 Double Eagle was examined by Professional Coin Grading Service [PCGS] grading experts, including PCGS founders David Hall and John Dannreuther, at Sotheby’s office in Beverly Hills. As related by David Hall on the PCGS website:2 “Before the Steven Fenton coin was sold by Sotheby’s, it was displayed in Beverly Hills. PCGS made arrangements to have the PCGS graders view the coin. Sotheby’s was very accommodating and allowed us to view the coin out of the holder in good lighting conditions. The coin has the creamy luster you see on late date Saints and though there are a few minor marks, it would grade a solid MS 65 at PCGS.”

Most recently, on March 18, 2021, Brett Charville, President of PCGS, re-examined the coin at Sotheby’s New York, and certified the coin as MS 65 (PCGS certification number: 42095232); and on April 7, 2021, John Albanese of Certified Acceptance Corporation (CAC) verified the 1933 double eagle as meeting its standard for strict quality within its grade–and assigned it a ‘green bean’.

EFFECTIVELY UNIQUE: Two examples, transferred from the Philadelphia Mint were receipted by the Smithsonian Institution (October 11, 19344). Eleven others, property of the United States Government and in the possession of the United States Mint as a result of prolonged litigation (see below) were never issued and are officially considered chattel.

“. . . Any additional examples that may exist are, similarly, property of the United States Government, illegal to own, and subject to seizure.”

THE MOST FAMOUS COIN IN THE WORLD: AMERICA’S LAST GOLD COIN STRUCK FOR CIRCULATION, WITH A STORIED PAST: THE ONLY 1933 DOUBLE EAGLE THAT CAN BE LEGALLY OWNED BY AN INDIVIDUAL

Please note that there is an Irrevocable Bid, as well as a Guarantee on this lot.