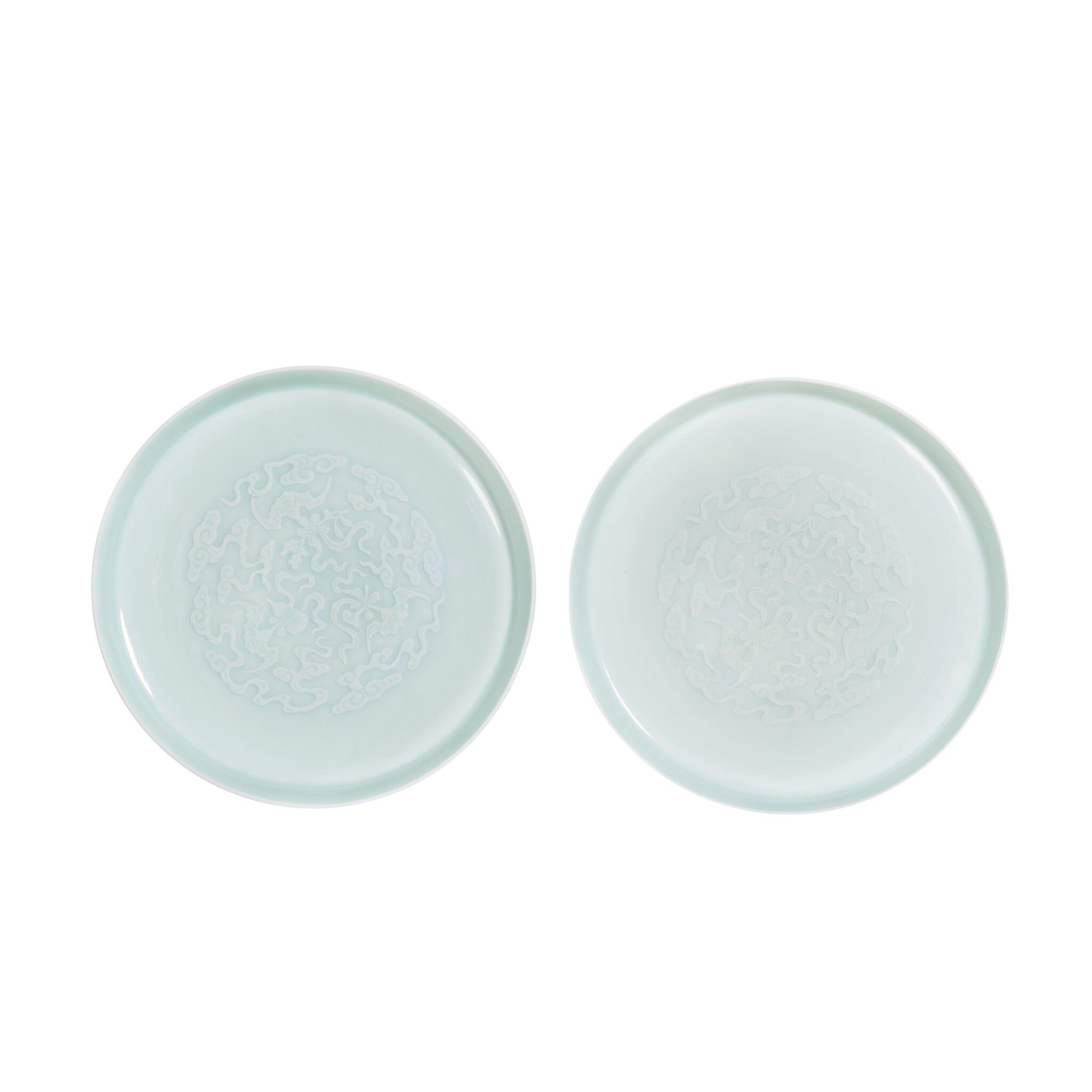 Marks and period of Yongzheng

each of flat circular form, delicately potted with a slightly concave centre rising to short upright flaring sides with an angle, supported on a short spreading foot, the interior elaborately carved with three bats in flight amidst undulating clouds and grasping beribboned double-gourd, nandina berries and lingzhi, the exterior carved with a band of radiating plantain leaves, covered overall in a translucent pale celadon glaze, the base inscribed in underglaze blue with a four-character mark

There is a minute approx. 0.2 cm flake to the rim of one dish at the 10 o'clock position of the mark and a tiny burst bubble to the footring of the other.

This pair of finely potted washers, decorated with auspicious bats grasping a double gourd, nandina berries or a ruyi sceptre, is a testimony to the refined taste and particular interest in auspicious symbolism of the Yongzheng Emperor. Although later versions from the Qianlong period are not uncommon, it is rarer to find a Yongzheng prototype.

A pair of Yongzheng dishes of this type in the Baur Collection is illustrated in John Ayers, Chinese Ceramics in the Baur Collection, Geneva, 1999, vol. III, no. A373; and a single dish is in the Boston Museum of Fine Arts, Boston (accession no. 46.70). See also a dish sold in our London rooms, 12th July 1966, lot 285; and a further example was sold in our New York rooms, 22nd March 2000, lot 124. A smaller Yongzheng dish of this design is included in Illustrated Catalogue of Ch’ing Dynasty Porcelain in the National Palace Museum, vol. 1, Tokyo, 1980, pl. 149.

A pair of Yongzheng washers of this form, but smaller in size (d. 11 cm), enveloped in a Yaozhou imitation olive-green glaze and inscribed with six-character reign marks, is preserved in the Shanghai Museum and illustrated in Zhou Lili, Qingdai Yongzheng-Xuantong guanyao ciqi [Qing dynasty official wares from the Yongzheng to the Xuantong reigns], Shanghai, 2014, pl. 5-23. Compare also a Yongzheng blue and white footed dish of this size and form, painted with a double vajra encircled by bajixiang emblems, sold in these rooms, 8th April 2013, lot 3143.