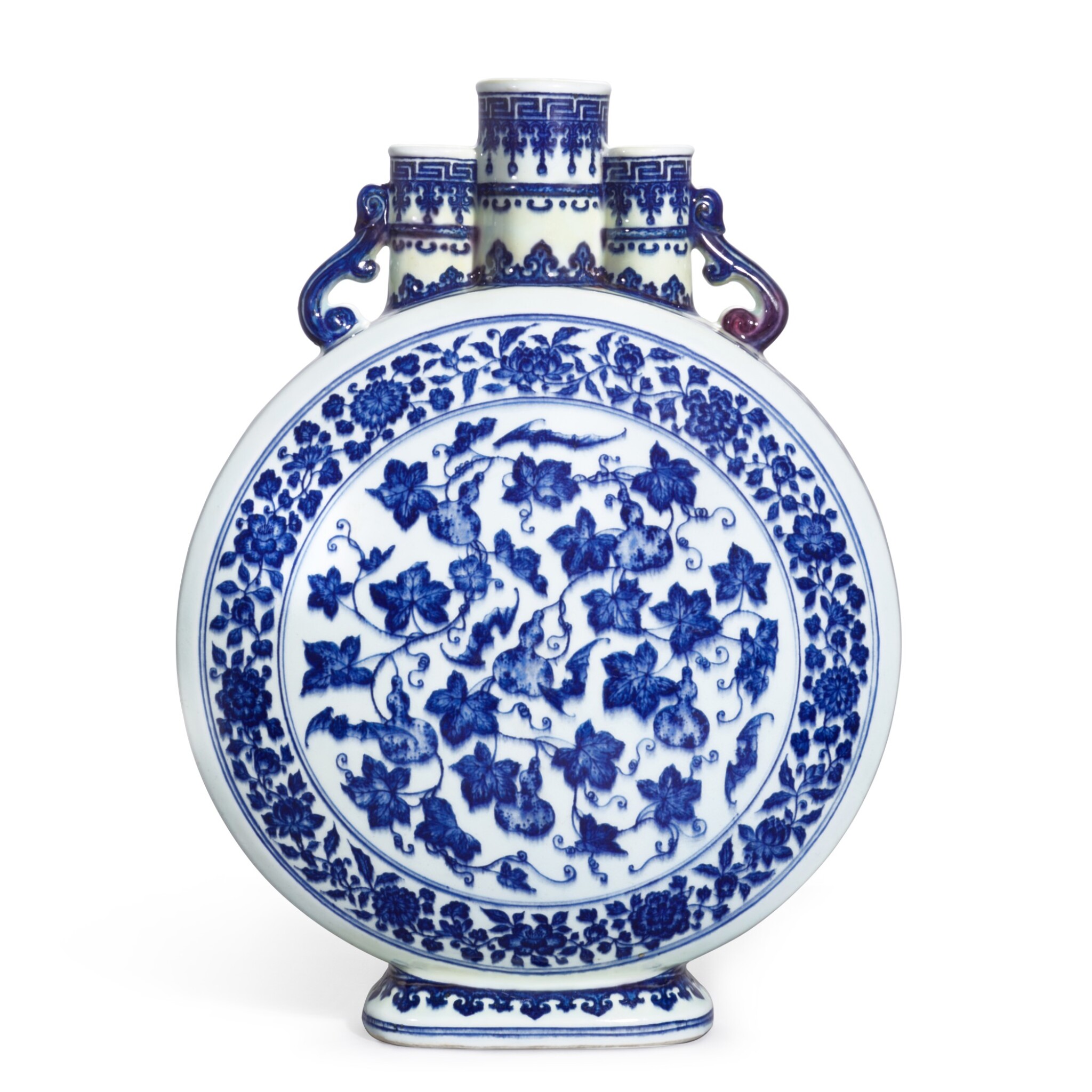 skilfully potted with a flattened spherical body rising from a splayed rectangular foot to three necks flanked by a pair of scroll handles with ruyi terminals, painted in powerful tones of cobalt blue on each domed side with the wufu soaring amidst continuous scrolling leafy vines bearing double gourds, encircled by a band of composite foliate scroll bearing various exotic blooms, the narrow sides similarly decorated, the neck painted with ruyi lappets, 'C' scrolls, pendant lappet and key-fret, the base inscribed with a six-character seal mark

There is restoration to the neck and foot to cover up cracks and losses with overspray now turning purple over the years. The stained cracks and infills seen on the interior of the spouts suggest that areas of losses may be limited with cracks stabilised and overpainted. There is stabilisation on the exterior on one side where the short sides meet the main convex side running down from the neck to the foot, possibly to conceal a firing flaw corresponding with the firing luting line on the interior.

It is very rare to find a moonflask with triple necks, and even rarer in blue-and-white as the present piece. Moonflasks, copied from Middle Eastern shapes, were popular in the early Ming and much copied in the Yongzheng period, where the prototypes were sometimes painstakingly copied, and sometimes shapes and designs were developed further, like in this example.

Compare a moonflask of this form, but with a guan-type glaze and decorated with five raised characters in archaistic style on each side of its body, in the Palace Museum, Beijing, illustrated in Gugong Bowuyuan cang: Qingdai yuyao ciqi / Qing Porcelains from the Imperial Kilns Preserved in the Palace Museum, vol. 1, part 2, Beijing, 2005, pl. 148. A similar gourd vine design can be found on a blue-and-white single-necked moonflask in the Huaihaitang Collection, but with an additional medallion painted at the centre of its body and lacking the circular floral border around it, included in the exhibition Ethereal Elegance. Porcelain Vases of the Imperial Qing. The Huaihaitang Collection, Art Museum, The Chinese University of Hong Kong, Hong Kong, 2008, cat. no. 86.