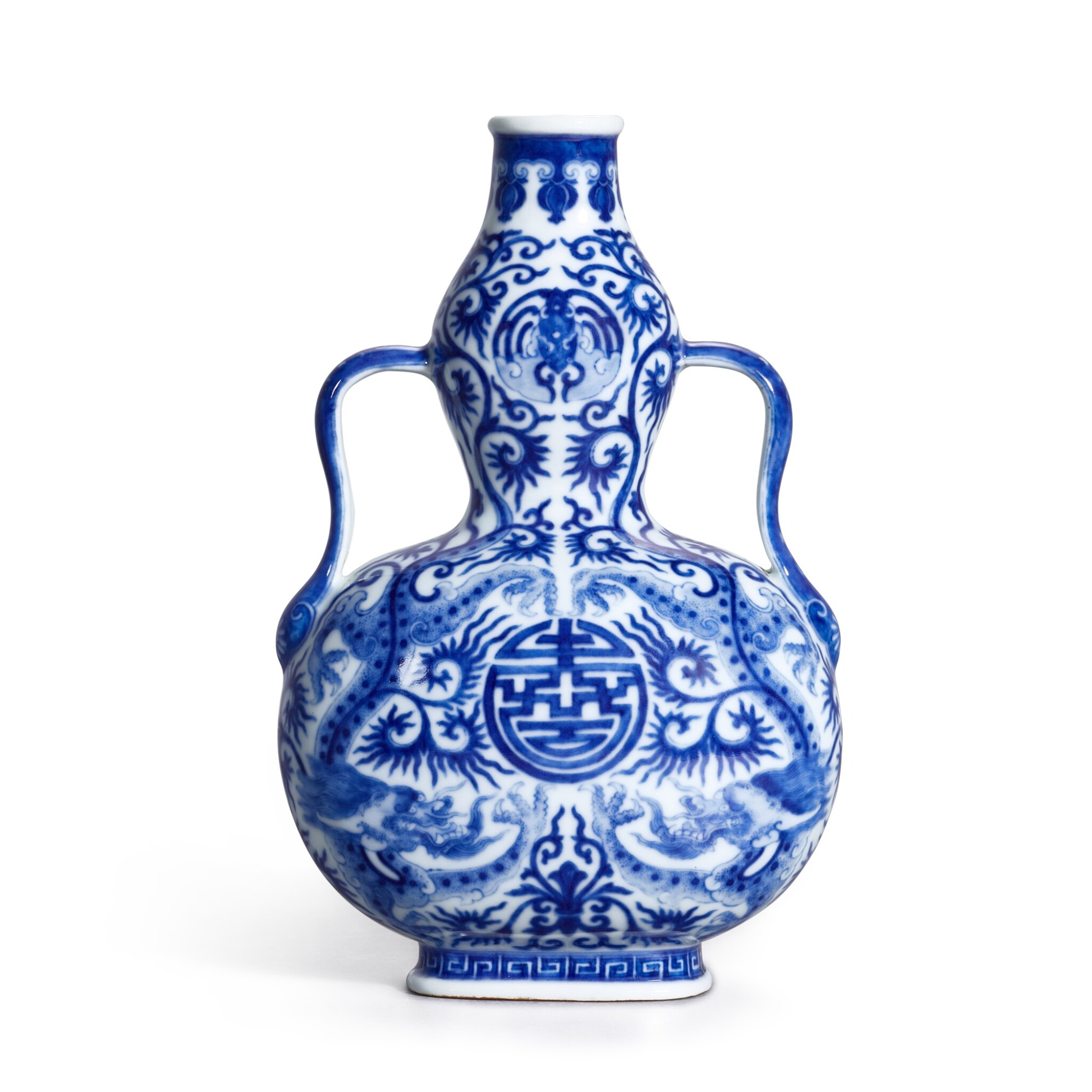 flanked on the sides with a pair of handles reverse-decorated with florets and terminating in ruyi heads, each side of the lower bulb decorated with a central shou roundel between a pair of confronting dragons detailed with long sinuous bodies, below a bat medallion on the upper bulb, the base inscribed with a six-character seal mark

There is a fine hairline around the upper joint of the neck and handle.

The elegant double-gourd form and dynamic design of the present vase are filled with auspicious symbolism. On each side, two sinuous dragons frame a stylised shou (longevity) character, below a bat facing upwards and ruyi-shaped handles. Together they symbolise blessings, longevity and fulfilment of all wishes (fushou ruyi). Vases of this type are held in important museums and private collections worldwide; a vase in the National Palace Museum, Taipei, was included in Illustrated Catalogue of Ch’ing Dynasty Porcelain in the National Palace Museum: Ch’ien-lung and Other Wares, vol. II, Tokyo, 1981, pl. 3; another in the Nanjing Museum, is illustrated in The Official Kiln Porcelain of the Chinese Qing Dynasty, Shanghai, 2003, pl. 277; a pair in the Huaihaitang collection, was included in the exhibition Ethereal Elegance. Porcelain Vases of the Imperial Qing, Art Museum, Institute of Chinese Studies, The Chinese University of Hong Kong, Hong Kong, 2007, cat. no. 107; a single vase and a further pair were sold in our London rooms, 7th November 2012, lot 500, and 6th November 2019, lot 157.

Vases of this form are also known decorated in other palettes; a blue-glazed vase with a combination of auspicious design elements in gilt, in the National Palace Museum, Taipei, was included in the Museum’s Special Exhibition of K’ang-hsi, Yung-cheng and Ch’ien-lung Porcelain Ware from the Ch’ing Dynasty in the National Palace Museum, Taipei, 1986, cat. no. 78; and a pair of yellow-ground vases with a shou character surrounded by bats, from the collection of Mrs Christian R. Holmes, was sold in these rooms, 9th October 2012, lot 3024.