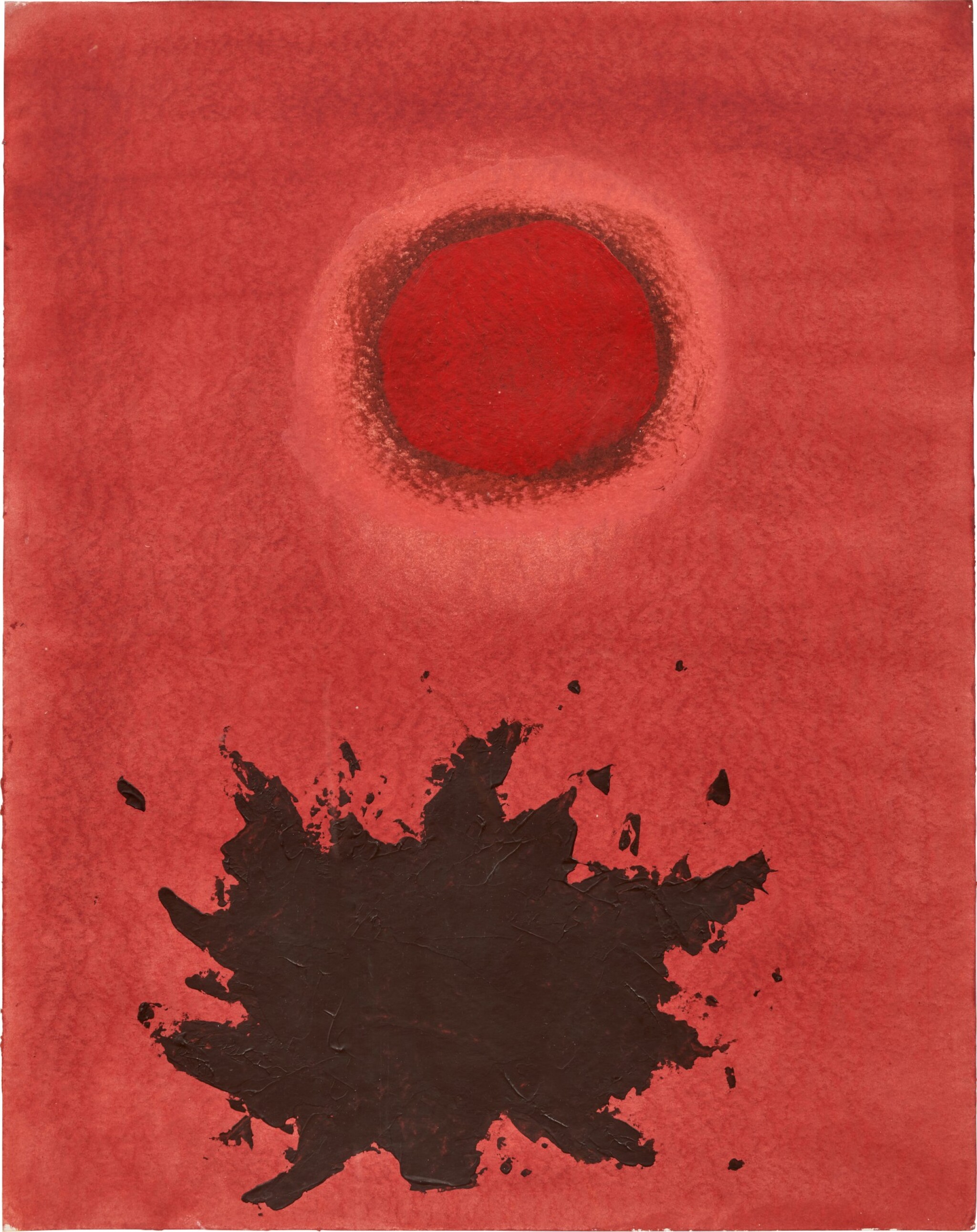 This work is registered in the Archive of the Adolph and Esther Gottlieb Foundation under no. 6836.

This work is in very good condition. The sheet is hinged verso to the mount. All four edges are slightly deckled. No restoration is apparent when examined under ultraviolet light.

ACA Galleries, Munich
Acquired from the above by the present owner in 2000

Powerfully uniting two radically opposing forms, Adolph Gottlieb’s Untitled from 1968 is a paradigmatic display of the artist’s most acclaimed Burst series, which stands as his most innovative contribution to the Abstract Expressionist movement and the transformation of abstraction in the post-war era. Gottlieb began his iconic Burst series in 1957; this series, which would become the most important period within the artist’s oeuvre, would demand his consummate artistic exploration until his death in 1974. As part of this body of work, this painting is suspended in dynamic symmetry with juxtaposition of a luminous orb in the upper half of the composition and a cacophony of explosive and dynamic black brushstrokes in the lower half. In Gottlieb’s exploration of light and darkness through colour and form, the artist sought to unite these seeming polarities into one composition, thereby evoking a multitude of ideas and pictorial concepts. As Gottlieb stated in an interview given during the Sao Paulo Biennial in 1963: “My paintings can represent an atomic bomb, a sun, or something else altogether: depending on the thinking of whoever is looking at it.” In this painting, the two radically opposing forms displayed on a luminous red background beautifully evoke the complex dichotomies, both conceptually and pictorially, underlying Gottlieb’s oeuvre.

Gottlieb, just like Jackson Pollock, was deeply influenced by the psychological theories of the Swiss psychiatrist Carl Jung and the Austrian psychoanalyst Sigmund Freud, in particular exploring the duplexity of the conscious and the subconscious, which would become a central theme of the Abstract Expressionist movement. By painting two opposing forms, Gottlieb aimed to create a visual equivalent of the significant psychoanalytic theories of the time. In this painting, the expressiveness and almost automative movement of the black brushstrokes recall the emotive gestures of Jackson Pollock. In contrast, the sublime colour of the glowing halo is reminiscent of the metaphysical qualities in the paintings of his contemporaries Mark Rothko or Helen Frankenthaler.

In a letter addressed to his friend and fellow painter Mark Rothko in 1943, Gottlieb writes: “We favor the simple expression of the complex thought. We are for the large shape because it has the impact of the unequivocal. We wish to reassert the picture plane. We are for flat forms because they destroy illusion and reveal truth.” As represented in this painting through a single, balanced synthesis, Gottlieb demonstrates his ability to communicate radiant energy and immerse the spectator in a chromatic, almost hypnotic experience while all along maintaining a highly elemental composition.