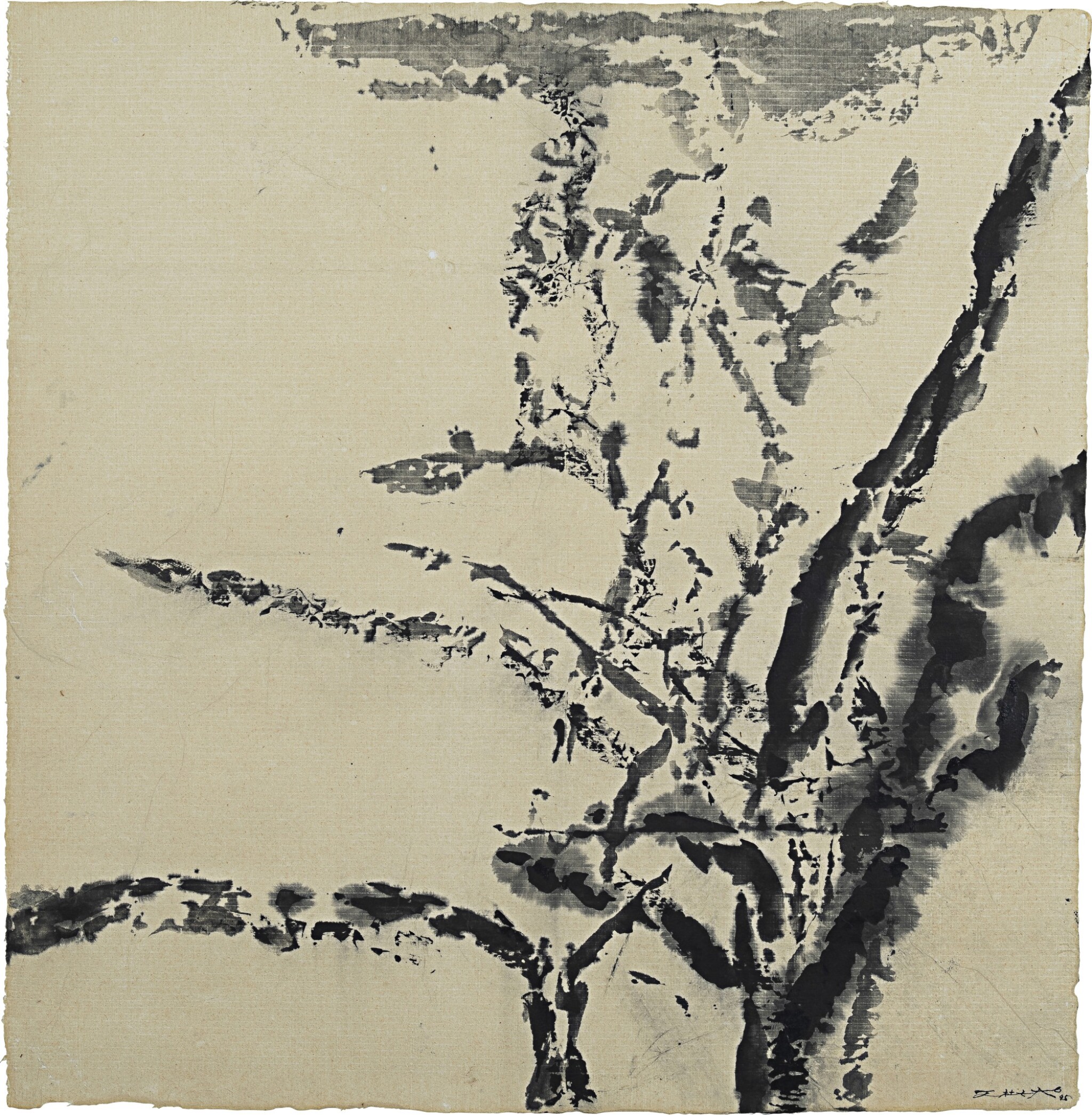 The authenticity of this work has been confirmed by the Fondation Zao Wou-Ki. This work will be included in the forthcoming Catalogue Raisonné currently being prepared by Françoise Marquet and Yann Hendgen. A certificate of authenticity may be delivered upon request to the buyer.

This work is in overall very good condition. The surface is lightly undulating and the creases visible all over the surface are inherent to the process and paper quality. A tiny hole and surface lift is visible in the upper right corner. One possible loss of surface in the centre of the upper area of the paper.

Galerie Bastien Art, Brussels
Acquired from the above by the present owner in 2008

A master in binding Eastern and Western traditions, Zao Wou-Ki’s artistic practice oscillates between the influence of Chinese painting and Western-inspired abstract compositions, beautifully merging the idiosyncrasies of each movement. From the mid-1950s onwards, Wou-Ki started to incorporate more direct allusions to Chinese culture. As he explained himself in an interview with the French magazine Preuves in 1962 : “Although the influence of Paris is undeniable in my development as an artist, I would also like to say that I have gradually rediscovered China as my personality has become stronger. In my recent works, it is conveyed in an innate manner. Paradoxically, it is perhaps to Paris that I owe this return to my deepest origins.”

This Eastern influence is particularly striking in the artist’s works on paper, many of which are executed in ink, a technique reminiscent of Chinese calligraphic tradition. In this artwork, Zao Wou-Ki emphasizes the importance of the void in the upper half of the composition, a principle deeply embedded in Chinese artistic heritage. Contrary to European culture, the emptiness is dynamic and active; it does not imply absence or non-existence. The seeming emptiness is an energetic element in the composition and used to create an even stronger expressiveness to the painterly elements. By juxtaposing void spaces with forms that evoke those of nature, Zao Wou-Ki allowed both literal as well intellectual space into his composition for his motifs to flourish.

The use of ink and rice paper further emphasizes the ways in which Zao Wou-Ki integrated his Chinese heritage into practice. Broadening his means of expression when using this technique, the artist stated: “The irregular marks as well as water on xuan paper creates unexpected and endlessly interesting rendering effects. Once in contact with the paper, the ink soaks into the material, and through the varying pressure and speed controlled by the elbow, creates infinite variations of black, white and grey, a thousand shades of grey… I watch a space born under the paint brush, taking shape and soaring free as my imagination roams, spreading widely is a sense of lightness – lightness in brushstroke, lightness in colours, and lightness in the passing of time.” (Exh. Cat., Hong Kong, De Sarthe Gallery, Zao Wou-Ki – Ink and Watercolor, 2015, p. 3). Characteristic of Zao Wou-Ki’s later production, this artwork achieves a remarkable balance between naturalism and abstraction.