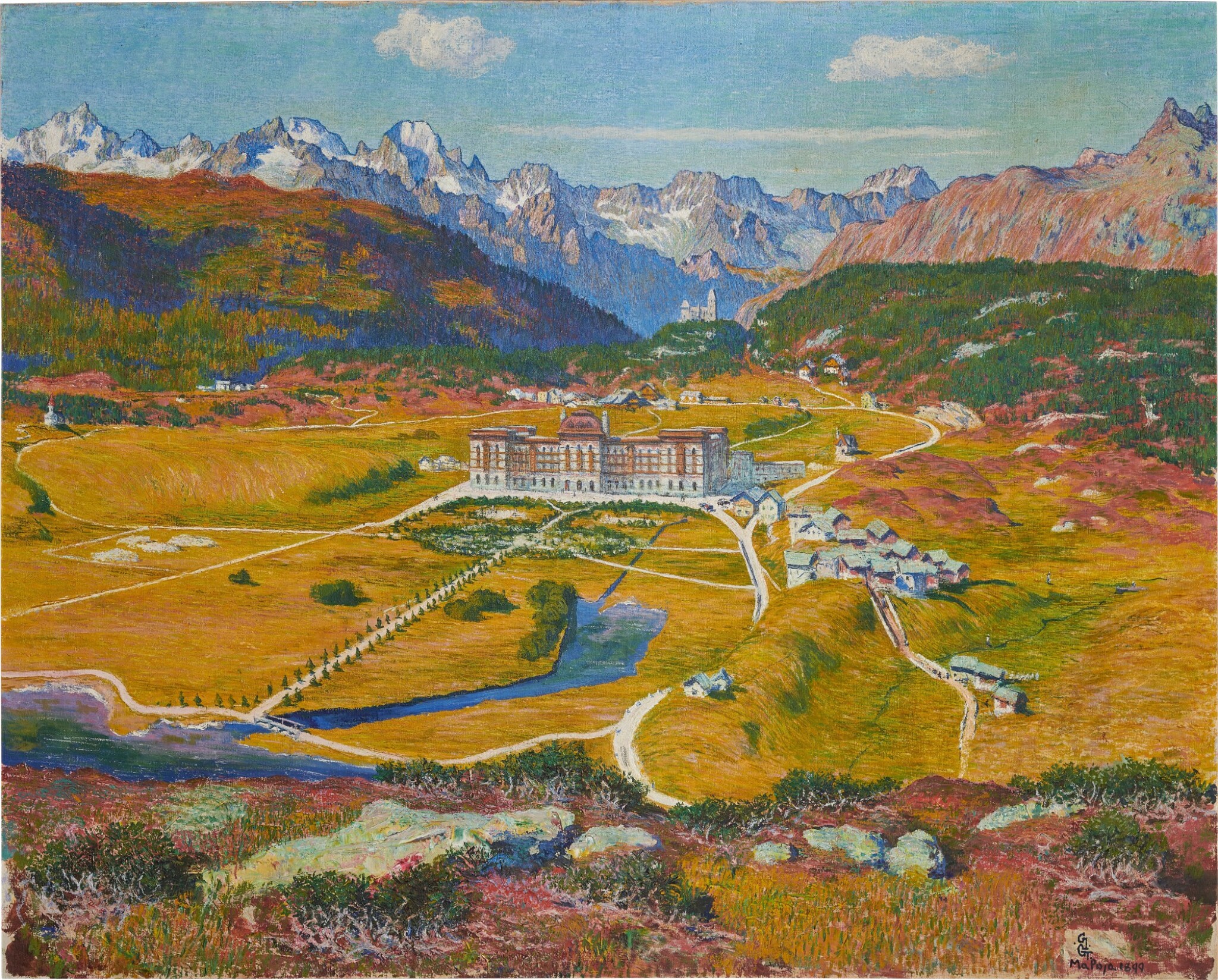 Vista su Maloggia con l’albergo Palace was commissioned in October 1899 to decorate the Maloja Palace. Six months later, the work was brought to Paris for the 1900 Exposition Universelle and was exhibited in the tourism section of the Grand Palais, a perfect opportunity to attract wealthy guests from abroad to the region.

Camille de Renesse (1836-1904) was the first owner of the Palace. This Belgian nobleman, entrepreneur and author built the neo-renaissance style hotel in just two years following the plans of the architects Alexander Kuoni and Jules Rau. De Renesse made every effort to provide the largest hotel Palace in the Alps with the most luxurious settings: it offered 300 rooms, a ballroom and a theater hall with Pompeian style paintings, a restaurant with classical stucco, along with modern central heating and one of the first air conditioning systems in the world. Outdoor activities were also possible thanks to tennis courts, a golf course, an ice rink, a riding area and a shooting range.

Giovanni Giacometti was undoubtedly the most appropriate artist of the period to depict the magnificence of the hotel and its surroundings. Each element of the composition testifies to the close connection he had with the region. In the background, Giacometti reproduces the famous Sciora and Bondasca mountain ranges with great fidelity. Situated amongst these majestic peaks, the Belvedere Castle was meant to become the de Renesse family’s residence. Furthermore, Giacometti paid hidden homage to his mentor Giovanni Segantini, as he reproduced the castle based on the latter’s drawings. To our knowledge, Segantini did indeed intend to live there with his family. In the axis of the hotel, a bosque-lined avenue stretches to Lake Sils. On the right side of the alley, the group of houses belong to the Capolago neighborhood, where Giacometti usually spent the summer months.

The artist chose to depict the landscape from a panoramic view, which is characteristic of the framing used on postcards and touristic posters. This allows the viewer to be included in the landscape and to experience the feeling of being surrounded by this lush nature. With thanks to a preparatory drawing, we know that Giacometti originally intended to extend his homage to the region with a carved or painted frame, whose edges showed an ibex – the heraldic animal of Maloja – and characters from Engadine legends.

From a stylistic point of view, both the composition and the attention to the singularity of the region testify to the influence of Segantini on the work of Giovanni Giacometti. His mentor not only shared his fascination with the splendor of Alpine landscapes but also introduced him to the painting techniques of divisionism. For Giacometti, the works of Segantini embodied a solution to the separation between material and ideal, and their fusion into a truthful vision. One can imagine that Giacometti pursued this goal while painting Vista su Maloggia con l’albergo Palace. The artist adjusts his brushstrokes, sometimes seeking to depict each detail with meticulousness, often giving movement to the painting with dynamic strokes. The oil is applied according to the desired effects, oscillating between thin and thick layers. Above all, the painter achieves the transcription of the autumnal atmosphere of the Swiss landscapes with an exceptional mastery of colours and light.

Created just one month after Segantini’s death, Vista su Maloggia con l’albergo Palace appears as a pivotal and major work in Giovanni Giacometti’s career: it stands for the culmination of an artistic period in which the mentor’s teaching reached its peak. From the turn of the century onwards, the works of the young painter indeed foreshadow an increasingly assertive independence. Through Cuno Amiet, Giacometti became interested in Gauguin’s synthetism and Van Gogh’s work. Gradually, he went beyond Segantian divisionism towards an expressive and daring use of colour. Giacometti therefore managed to continually renew himself, adapting his creations to the artistic development of his time and even surpassing them.

This impressive landscape has remained in the Engadine region for over a century and stands as a major contribution to the art history and the Swiss art market.