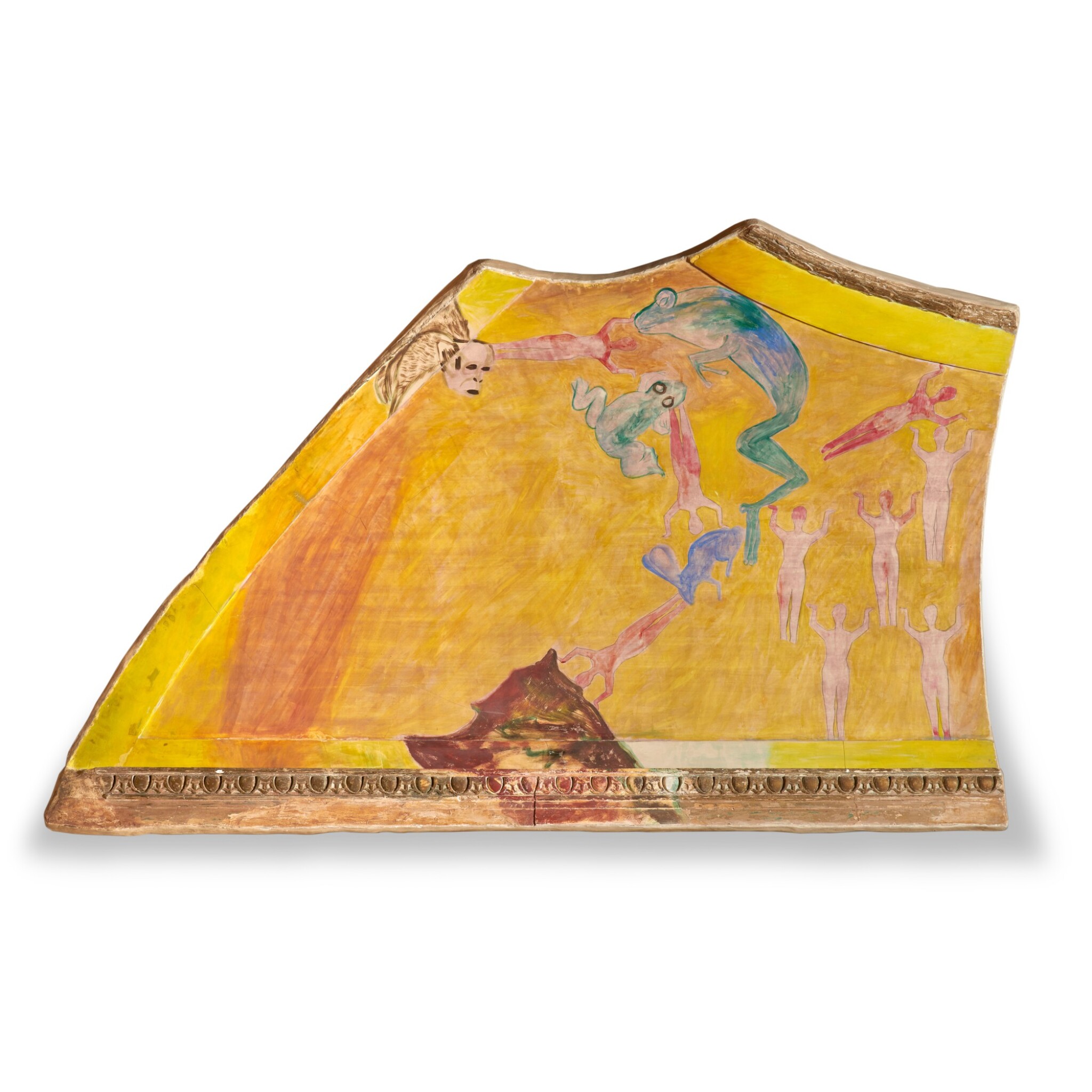 Signed and titled on the reverse

This work is in good and original condition. Close inspection reveals a few handling marks along the edges, as well as some light surface dirt. There are some cracks to the plaster in intermittent places, some of which have some associated paint losses. Most of these cracks appear to be inherent to the medium chosen by the artist and are therefore to be expected for such a wall relief.

Palladium Night Club, New York
Luca Marenzi, London
Acquired from the above by the present owner in 2001

In May 1985 Steve Rubell and Ian Schrager, formers owners of the popular Studio 54, inaugurated a nightclub called Palladium. The club’s design was entrusted to Japanese architect Arata Isozaki, who in turn enlisted curator Henry Geldzahler to coordinate the club’s decorations. Geldzahler commissioned a group of young painters including Keith Haring, Francesco Clemente, Jean-Michel Basquiat and Kenny Scharf. It was Clemente who suggested the decoration should be on site, directly painting the parget walls in the building.

Bought by the New York University in 1997, the Palladium was to be demolished to accommodate students housing. However, agreements were quickly made to remove Clemente's work and to divide it into several individual works. Palladium Bestiario V is the outcome of this second life.

As both the title and the patterns of the work suggest, symbolism is a predominant feature in Clemente's work. Henry Geldzahler confirmed this in a 1994 statement: “Francesco Clemente’s imagery is the most fascinating aspect of his work in all media – its variety, depth, and perversity. Anyone who has ever taken a course in iconography knows the amplitude of saints and graces, the hours, invented animals, the sins and the seas and so on.” (Henry Geldzahler, in Italiana. From Arte Povera to Transavanguardia, Milan, 1994, p. 68)

In addition to the Palladium, Clemente has created four site-specific decorations to date. In 1982, the artist was commissioned to create a fresco in a private indoor swimming pool in St. Moritz. One year later, he painted the walls of Julian and Jacqueline Schnabel's loft on 20th Street, a work that was later moved to West 11th Street. In 1999, Clemente participated in the decoration of Bruno Bischofberger's new home in Meilien, Switzerland which was designed by Ettore Sottsass. Finally, in September 2000, Clemente completed the ceiling of the new Ian Schragers Hudson Hotel's bar in New York, designed by Phillipe Starck.

Working across painting, installation and watercolour, Clemente's dreamlike works are the results of experimentation with symbols, portraiture and the human figure. Throughout his career, the artist has largely shunned the restrictive label of movements and styles. As he once said: “I believe there is such a thing as an imagination shared by the different contemplative traditions. My goal is to collect images and references from these traditions and connect them with the emotions from the present-day, and common experiences.”