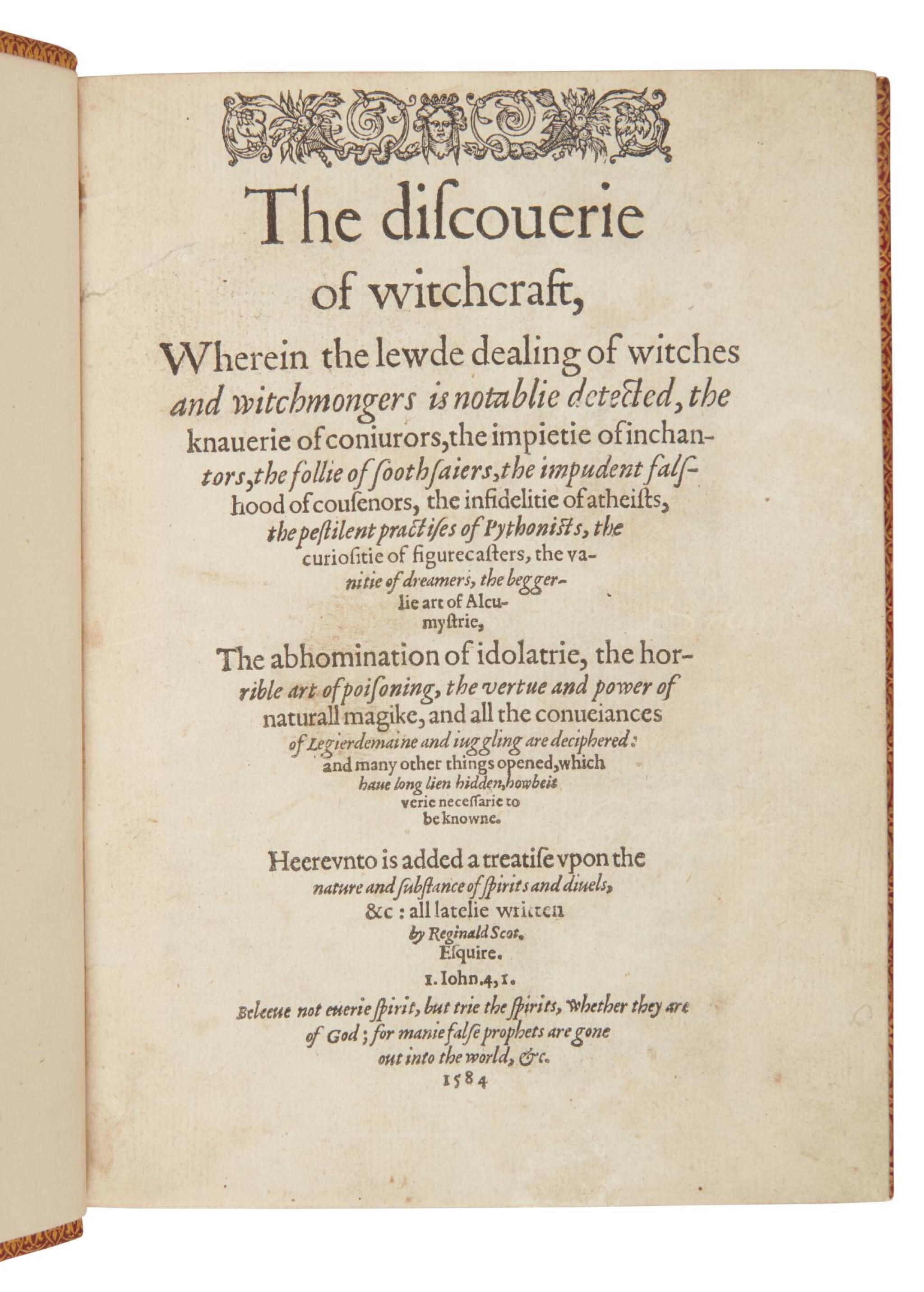 The discoverie of witchcraft, Wherein the Lewde dealing of witches and witchmongers is notablie detected … London: [Henry Denham for] William Brome, 1584

4to (191 x 140 mm). Text in roman and black letter with side notes in italic, woodcut head- and tailpieces, historiated and floriated initials, woodcut illustrations, including 6 full page (4 inserted as *1–2 between quires Dd and Ee), 4 tables, table of contents at the end; lightly washed and pressed, subtle repair to inside margin of title-page, light toning to leaves Bb3–6, Kk3–6 and Pp7–8, short marginal tear touching side note on Dd6v. Full crushed red morocco paneled gilt by Rivière & Sons, the spine richly gilt in 6 compartments with raised bands, gilt dentelles, edges gilt.

First edition of Scot's explosive treatise on witchcraft, in which he disputes the existence of witches and explains the phenomenon as "resulting out of a particular type of social encounter: old women begging for food or other assistance would curse their neighbours when they were turned away empty handed; if something bad then happened — the death of a child, perhaps — the old woman would be taken to be a witch. Witchcraft accusations in England thus arose in the context of disagreements over expectations and obligations relating to charitable giving. This sociological account was persuasive to contemporaries and has been adopted by modern historians. As far as Scot was concerned, those who confessed to being witches were either deluded or the victims of torture, while much of what Bodin had taken to be evidence for the existence of witchcraft in different eras and diverse cultures, Scot was prepared to dismiss as mere fable and fiction" (ODNB).

Divided into sixteen books, the main work is followed by a "Treatise upon the Nature and Substance of Spirits and Divels." In developing his deep knowledge of country law courts and village lore, a remarkable achievement of erudition, Scot consulted numerous works in Latin and English to substantiate his view that belief in witchcraft and magic has no rational or religious basis.

The keystone of a conjuring collection. Scot's Discoverie was the first work in English to reveal tricks of the conjuror's trade. He attributes manifestations of witchcraft to imposture and trickery, as demonstrated in books 13 and 14, where he exposes conjuring tricks, magical illusions and various cozening devices. "While Scot's enlightened views did have some good effect, many ... responded with a vigorous defense of the old beliefs. Scot's detractors included James VI of Scotland ... who described Scot's opinions as 'damnable,' and ordered Scot's book burned upon his accession to the throne" (Norman). Despite the king's order to destroy all copies of this work, it survived and was frequently reprinted (see following lots).