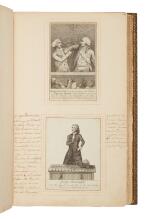 2 volumes, folio (437 x 271 mm). The prints (which include a handful of original drawings) inlaid to larger sheets, usually singly or in pairs (and very occasionally more than two per sheet), many in the first vol. with extensive manuscript notes by Esdaile on the mounting sheets, which sometimes extend to additional sheets bound in for that purpose, manuscript index at front of first vol., with engraving adapted as a title-page with manuscript title "Remarkable Characters," similar section-titles throughout, second vol. not annotated but containing portraits of similar ilk; scattered staining and tears, some prints trimmed close, a few folded to fit the album. Purple crushed morocco by Rivière & Son, covers with French fillet border, spines gilt in seven compartments, plain endpapers, edges gilt on the rough; neatly rebacked, extremities rubbed.

A remarkable collection of remarkable characters.  Persons remarkable for either their physical appearances or unusual accomplishments were a particular interest of Ricky Jay, and the Esdaile albums were one of the most prized items in his collection; the collection is particularly important for preserving popular and ephemeral images of the type that seldom survive the notoriety of their subject.

A survey of the manuscript section-titles and a sampling of their subjects, gives just a hint of the breadth and depth of the collection:

The portrait of "Persons Remarkable for one or more Circumstances of their Lives" is the most varied, ranging from someone who lost an arm to a windmill, to the person famous for making the best razor strops in London, to someone with a vestigial twin.

Esdaile devoted the final five years of his life almost exclusively to the perusal of his print collection, and judging by his detailed and insightful commentary, chiefly biographical, these albums received more than a fair of his attention. One of the bibliographical subjects in the albums is J. Lackington, described on his portrait, "Who a few years since, began Business with five Pounds; now sells one Hundred Thousand Volumes Annually." Esdaile has written "Mr. Lackington the Cheapest Bookseller in the World who formerly kept a very small shop … I have been informed from good Authority that he has taken for weeks from £250 to £300 a day."