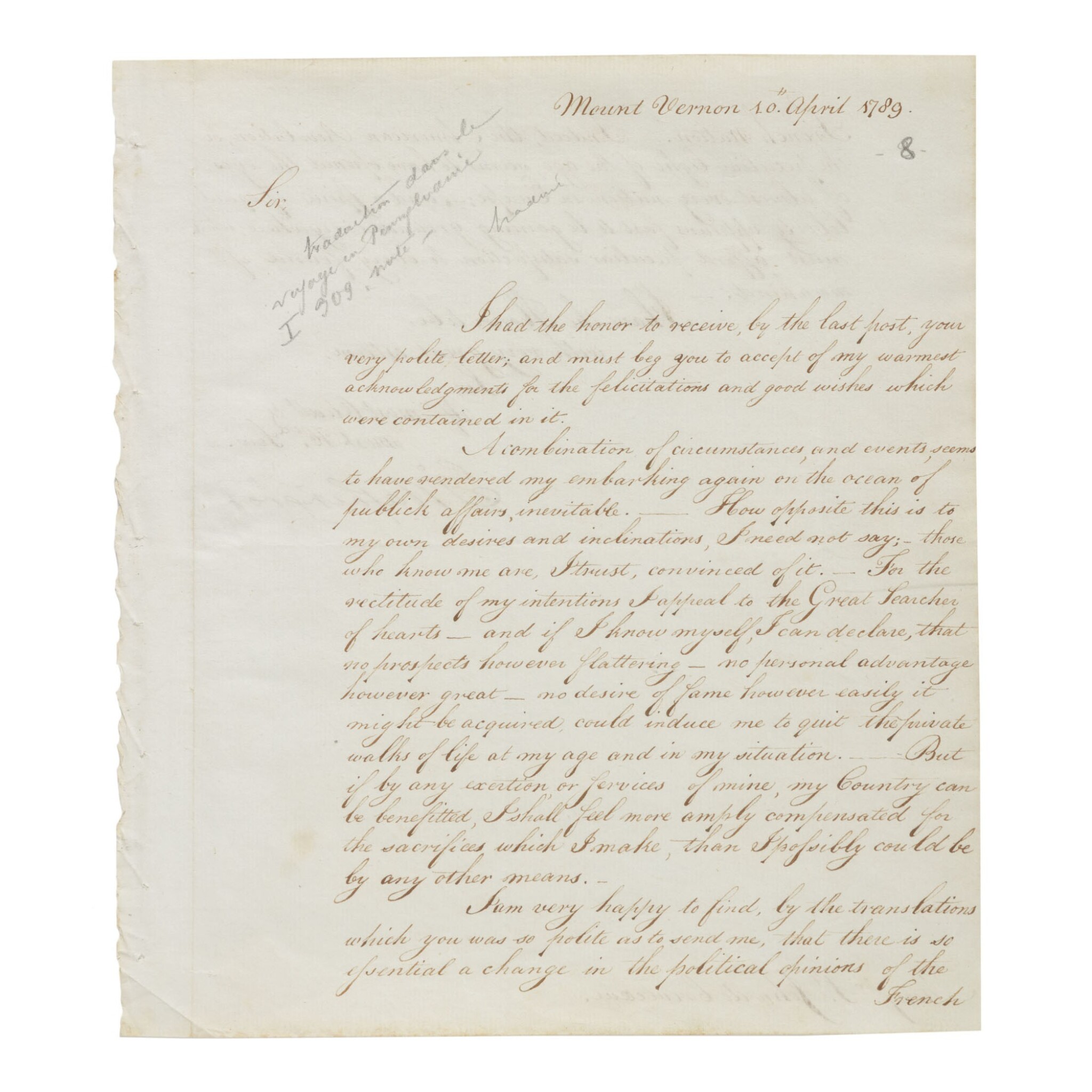 Letter signed ("Go: Washington") as first President-Elect, to Michel-Guillaume St. Jean de Crèvecoeur, acknowledging and accepting the necessity of his having to assume the office of President of the United States

"If, by any exertion, or services of mine, my Country can be benefitted, I shall feel more amply compensated for the sacrifices which I make, than I possibly could be by any other means."

On 6 April 1789, Congress certified the Electoral College votes that unanimously elected George Washington as the first president of the United States—an outcome that had been widely anticipated from the time that New Hampshire's ratification of the Federal Constitution, 21 June 1788, provided the ninth-state approval necessary to make the new compact the law of the land. Washington's ambivalence about becoming the chief executive is well known: on 1 April 1789 he famously wrote to Henry Knox, Acting Secretary of War and his old comrade in arms, that "my movements to the chair of Government will be accompanied with feelings not unlike those of a culprit who is going to his place of execution: so unwilling am I, in the evening of a life nearly consumed by public cares, to quit a peaceful abode for an Ocean of difficulties, without that competency of political skills—abilities & inclination which is necessary to manage the helm" (Papers, Presidential Series 2:2; sold, Sotheby's, 1 November 1993, lot 232).

Washington's modesty—false or not—was belied by his willingness to serve. Indeed, the very office of the presidency owes much to the character of Washington. His fame as the steady hero of the Revolution, his manifest lack of personal ambition, and his determination not to profit from public service won him a reputation unapproached by any other American of his day. Despite his strong desire to live in the "peaceful abode" of Mount Vernon, he felt compelled to give active support to the Federal cause, agreeing to serve as president of the Constitutional Convention. Even before the delegates gathered in Philadelphia, there was a widespread belief that however the office of chief executive was ultimately defined, Washington was its only possible candidate. Washington accepted the inevitability of his election, and as early as January 1789 he had begun work on an Inaugural Address, which he read at his inauguration at Federal Hall, New York, 30 April 1789.

But long before the inauguration, letters of congratulations started to arrive at Mount Vernon. Washington here responds to a missive (now lost) from Crèvecoeur, the French consul at New York. In this remarkable letter, Washington expresses gratification that the American Revolution is encouraging the pursuit of liberty across Europe and balances his characteristic self-deprecation with a frank admission of the inevitability of his being the man needed to steer the American ship of state "on the ocean of publick affairs":

"I had the honor to receive, by the last post, your very polite letter; and must beg you to accept of my warmest acknowledgments for the felicitations and good wishes which were contained in it.

"A combination of circumstances, and events, seems to have rendered my embarking again on the ocean of publick affairs, inevitable. How opposite this is to my own desires and inclinations, I need not say; those who know me are, I trust, convinced of it. For the rectitude of my intentions I appeal to the Great Searcher of hearts—and if I know myself, I can declare, that no prospects however flattering—no personal advantage however great—no desire of fame however easily it might be acquired, could induce me to quit the private walks of life at my age and in my situation. But if, by any exertion, or services of mine, my Country can be benefitted, I shall feel more amply compensated for the sacrifices which I make, than I possibly could be by any other means.

"I am very happy to find, by the translations which you was so polite, as to send me, that there is so essential a change in the political opinions of the French Nation. Indeed, the American Revolution, or the peculiar light of the age, seems to have opened the eyes of almost every nation in Europe; and a spirit of equal liberty appears fast to be gaining ground everywhere, which must afford peculiar satisfaction to every friend of mankind."

Michel-Guillaume St. Jean de Crèvecoeur (1735–1813) came to the New World as a cartographer for the French army during the French and Indian War. After the war he worked throughout the English colonies as a surveyor, eventually settling in Orange County, New York. His experiences there were the basis of his Letters from an American Farmer, published in London in 1782 under the name of J. Hector St. John. After a brief return to France to care for his elderly father, Crèvecoeur came back to the United States in 1783 as the French consul in New York, a post he held until 1790. He was well acquainted with Lafayette, Jefferson, and Madison, who recommended him to Washington as "a very worthy man & entitled by his philanthropy and zealous patronage of whatever he deems useful, to much esteem and regard" (Papers, Presidential Series 1:94–95).

In 1787, Crèvecoeur presented Washington with a set of the second, expanded French edition of Lettres d'un cultivateur américain, a work that Washington believed would "afford a great deal of profitable and amusive Information, respecting the private Life of the Americans; as well as the progress of agriculture, manufactures and arts in their Country" (Papers, Confederation Series 6:342).

After returning to France for good, Crèvecoeur wrote another account about his life in America, Voyage dans la haute Pensylvanie et dans l'état de New-York (3 volumes; Paris, 1801), which was dedicated to the memory of Washington and featured a heroic engraved portrait of the first president as its frontispiece. The present letter was first published in this work, in French translation, as a footnote on pages 309–310 of the first volume.