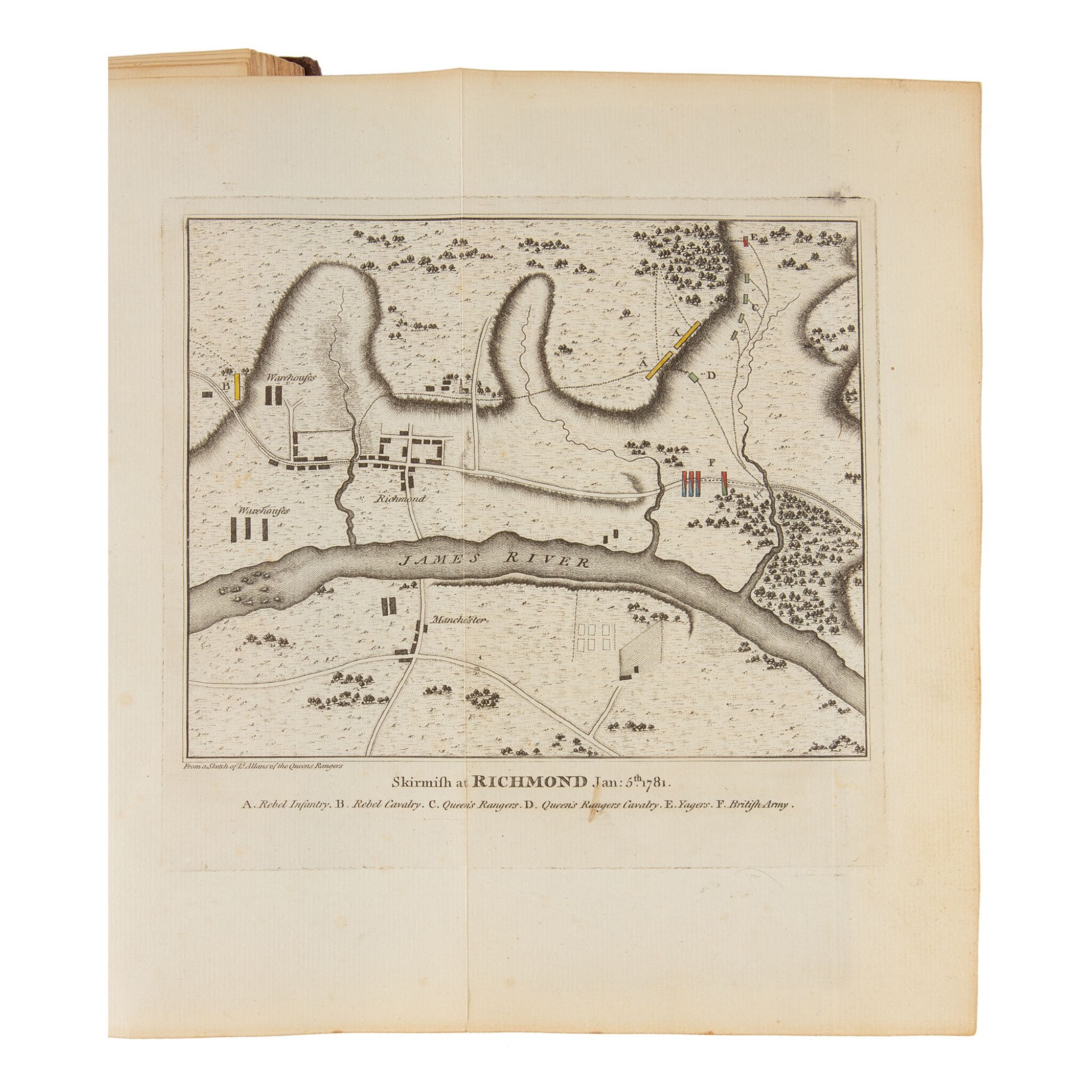 A Journal of the Operations of the Queen’s Rangers, from the End of the Year 1777, to the Conclusion of the Late American War. Exeter: Printed for the Author, [1787]

The first, privately printed, edition of one of the rarest contemporary accounts of the American Revolution, from the collection of one of Simcoe's Rangers.

The Queen's Rangers were composed almost entirely of American Loyalists and were commanded by Simcoe from shortly after the raising of the corps in 1776 until the surrender of Cornwallis at Yorktown. (Simcoe had earlier tried to raise, without success, a corps of Black Loyalist soldiers at Boston.) While chiefly concerned with the Virginia campaign, Simcoe's Journal—which he distributed to close friends and family in an elaborate privately printed edition after returning to England—also describes the "incessant and adventurous action" of the Rangers in New York, New Jersey, Pennsylvania, and the Carolinas. Nine of the battle plans were engraved for this work, the tenth being a "Sketch of the Skirmish at Petersburg" published by Faden in 1784—however, the title of this previously issued map has been emended in manuscript to indicate that it had been "copied from a Plan of Lt. Spencers." Despite its significance, this work remained largely unknown for several decades, due to the small number of copies printed and their circulation, as with this copy, within Simcoe's circle. In 1846, Obadiah Rich wrote regarding the first published edition of 1844: "This book was first printed soon after the termination of the war of Independence, but apparently not published, and was almost unknown to exist until a few years ago, when a copy turned up in a sale (I believe of Mr. Chalmer's library), and from that copy, this edition was printed" (Bibliotheca Americana Nova 2:388).

William Jarvis, whose signature appears on the title-page of this copy, "joined John Graves Simcoe’s Queen’s Rangers in 1777. He was wounded at the battle of Spencer’s Tavern in Virginia on 26 June 1781 and was commissioned cornet on 25 Dec. 1782. At the cessation of the American Revolutionary War he went on half pay and returned to Connecticut. There the hostility to the loyalists often resulted in violence, and on one occasion Jarvis was injured. In 1784 or 1785 he travelled to England where he secured Simcoe as a patron. Simcoe recommended him in 1791 to the Home secretary, Henry Dundas, for the positions of provincial secretary and clerk of the Executive Council of the newly established province of Upper Canada. Although Jarvis did not receive the clerkship, he was, however, rewarded with the more important, prestigious, and lucrative post of provincial secretary and registrar. In the summer of 1792 he arrived in Upper Canada as part of Lieutenant Governor Simcoe’s entourage" (Dictionary of Canadian Biography).