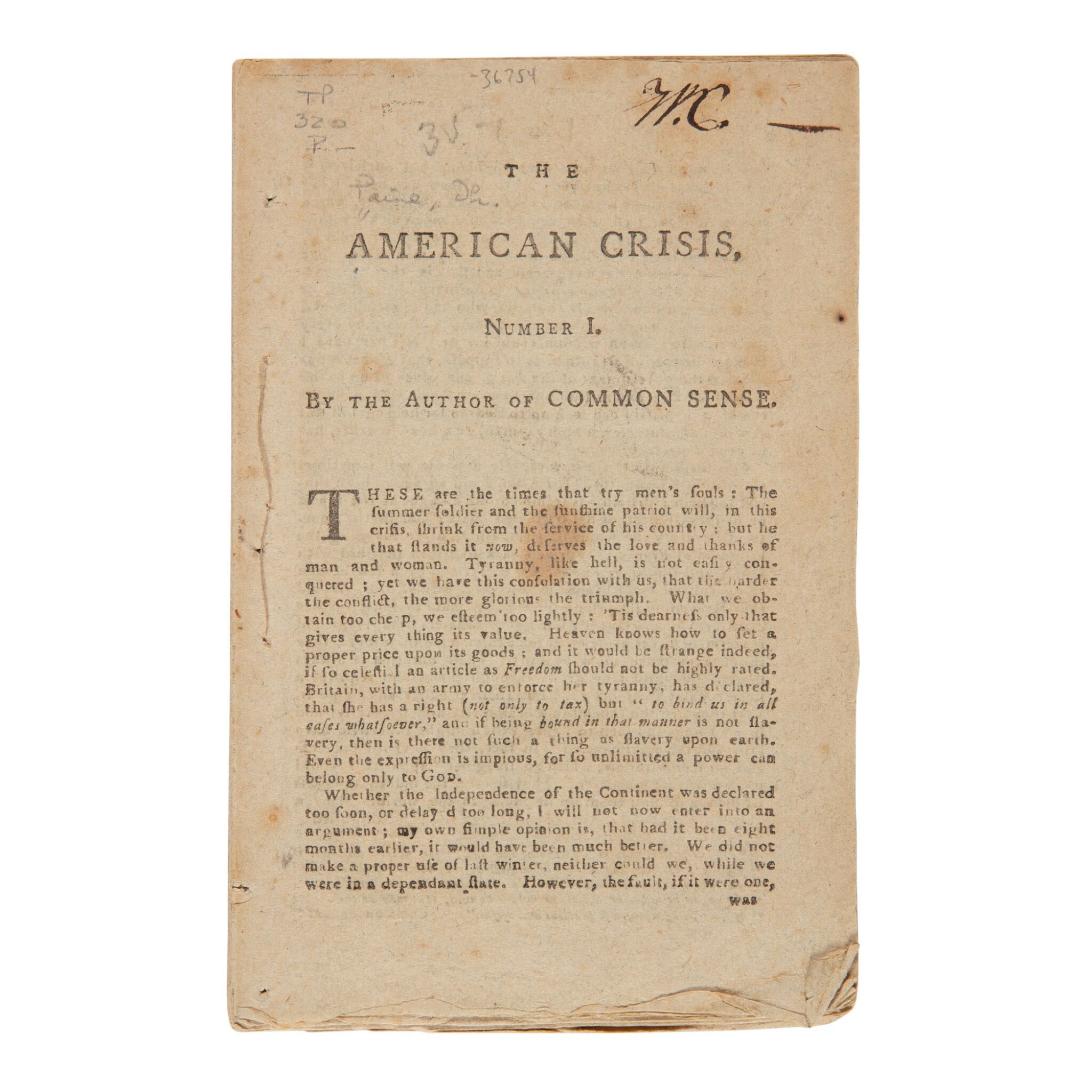 Together 3 pamphlets, 8vo in half-sheets (192 x 122 mm, partially uncut). Continuous pagination and signing throughout, all parts with caption titles, parts 2 and 3 dated at the end of the text, with final blank G4; some scattered foxing, B1 printed with paper flaw, costing about six words. Stab-sewn. Half brown morocco slipcase, chemise.

A near-fine copy of a very rare Philadelphia printing of The American Crisis, Number I, the most influential polemic ever written, the first paragraph of which is the most sublime passage in American political scripture—not excepting the Declaration of Independence, the Gettysburg Address, or Lincoln's second inaugural:

"These are the times that try men's souls: The summer soldier and the sunshine patriot will, in this crisis, shrink from the service of his country; but he that stands it now, deserves the love and thanks of man and woman. Tyranny, like hell, is not easily conquered; yet we have this consolation with us, that the harder the conflict, the more glorious the triumph. What we obtain too cheap, we esteem too lightly: 'Tis dearness only that gives every thing its value. Heaven knows how to set a proper price upon its goods; and it would be strange indeed, if so celestial an article as Freedom should not be highly rated. …"

November and December 1776 almost saw the end of the American Revolution before it was properly underway. Washington's Continental Army had been chased out of Manhattan and was camped in New Jersey: cold, dispirited, underfed, underclothed, unpaid—and unable to stem the coming British advance against Philadelphia. Many enlisted men's terms of service expired on 31 December, and few were interested in reenlisting. Out of this despair came the rousing rallying cry of The American Crisis. Thomas Paine's Common Sense was published in early January 1776 and was instrumental in turning popular opinion in the American colonies in favor of complete independence from Great Britain. At the end of the same year, The American Crisis helped sustain the belief—among civilians and soldiers alike—that independence was both desirable and achievable.

Paine himself wielded a sword as well as a pen during the Revolution. He first enlisted in General Roberdeau's Pennsylvania "Flying Camp," renewing his enlistment as an aide-de-camp to Nathaniel Greene at Fort Lee. Paine was among those surrounding Washington's main force as it retreated towards the Delaware River, and it was in Continental Army camps that he began to write The American Crisis. The text appeared virtually simultaneously in The Pennsylvania Journal and as a separate pamphlet in at least three issues. Copies soon found their way from Philadelphia to the front lines, and the first number was read aloud to Washington's troops on the evening of 23 December 1776 as they prepared for the pivotal battle of Trenton.

A second installment of The American Crisis followed almost immediately. Addressed to Sir Richard Howe, the pamphlet lampoons the Admiral's offer of pardons if the Americans agreed to reconcile with the mother country. "It is surprising to what pitch of infatuation blind folly and obstinacy will carry mankind, and your Lordship's drowsy proclamation is a proof that it does not even quit them in their sleep. Perhaps you thought America too was taking a nap, and therefore, chose, like Satan to Eve, to whisper the delusion softly, lest you should awake her. This Continent, Sir, is too extensive to sleep all at once, and too watchful, even in its slumbers, not to startle at the unhallowed foot of an invader. You may issue your proclamations and welcome, for we have learned to 'reverence ourselves' and scorn the insulting ruffian that employs you." Number II also contains the first publication of the term "The United States of America."

The third number appeared on 18 April 1777, on the second anniversary of Lexington and Concord and two days after Paine had been appointed by Congress to be Secretary of the Committee of Foreign Affairs. This part of The American Crisis is somewhat more objective in tone, offering a historical summary of the grievances that led to Revolution, and is seemingly directed towards colonists still uncertain of the necessity and prudence of independence. The theme of Paine's argument is well summarized by a rhetorical question he raises: "To know whether it be the interest of the Continent to be independent, we need only ask this easy, simple question: Is it in the interest of a man to be a boy all his life?"

Ten further installments appeared intermittently until The Last Crisis was issued in April 1783, but only two others were published as separate pamphlets, the rest appearing only in periodicals. The series was collected and frequently published in volume form, but no publication of any part had the impact that the first appearance of the first number did.

The bibliography of these ephemeral publications is still unsettled. In addition to the present edition, published without imprint, two issues were published by the Philadelphia printers Styner and Cist (one with imprint, one without). The Styner and Cist printings have traditionally been thought to be the first, although the pair undoubtedly invoked Paine's ire by pirating Common Sense. Further, Paine's later correspondence always referred to the printer of The American Crisis (never explicitly named) in the singular. The present pamphlets have frequently been described as a single work published in early 1777, but it should be noted that the Styner and Cist printings of The American Crisis numbers 1 to 3 also have continuous pagination and signing.

Like the first edition of Common Sense, the first number of The American Crisis is now very rare, copies having literally been read to pieces, and it may be considered as one of the rarest of all the critical works of American Independence. The North American Imprints Project locates just eight copies of this issue.