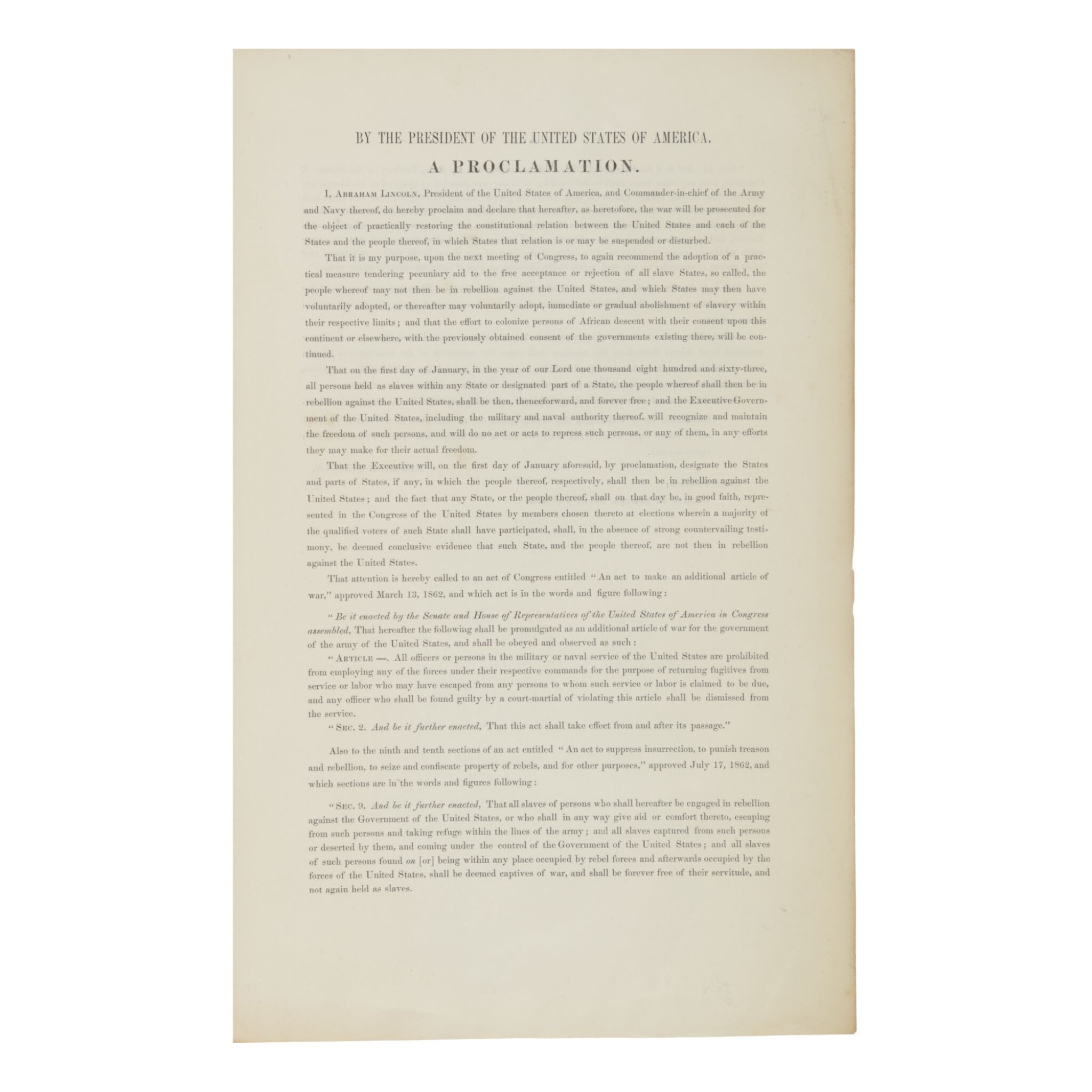 Printed circular (332 x 211 mm) on a bifolium of wove paper, the text of Lincoln's Proclamation printed on the recto and verso of the second leaf, Secretary of State William H. Seward's letter of transmittal printed on the recto of the initial conjugate leaf; some very light handling soiling, pencilled date ("Sept 22 1862") at head of first leaf. Blue morocco portfolio gilt.

In 1855, Lincoln confided to his good friend Joshua Speed that he was still tormented by the memory, from fourteen years earlier, of having seen a group of shackled slaves while he was travelling by steamship from Louisville to St. Louis. While Lincoln had been anti-slavery for decades, he only began to openly express those views when he ran for the United States Senate against Stephen Douglas in 1858. As candidate Lincoln said at a Chicago rally in July of that year, "I have always hated slavery, I think, as much as any Abolitionist. I have been an Old Line Whig. I have always hated it, but I have always been quiet about it until this new era of the Nebraska Bill began."

But despite his personal abhorrence of slavery, Lincoln was constrained not just by the Constitution, but also by political and military reality. Horace Greeley's letter-editorial, "The Prayer of Twenty Millions," published in the New York Tribune, perfectly expressed the frustrations of those who called for full and immediate emancipation. Greeley accused the President of being "strangely and disastrously remiss" by delaying emancipation; of being "unduly influenced by the counsels … of certain fossil politicians hailing from Border Slave States"; and of seeming to pursue a "preposterous and futile" strategy by attempting "to put down the Rebellion and at the same time uphold its inciting cause."

Greeley printed Lincoln's response in the 25 August 1862 issue of the Tribune. The President's answer was unequivocal: "My paramount object in this struggle is to save the Union, and is not either to save or to destroy slavery. If I could save the Union without freeing any slave I would do it, and if I could save it by freeing all the slaves I would do it; and if I could save it by freeing some and leaving others alone I would also do that. What I do about slavery, and the colored race, I do because I believe it helps to save the Union; and what I forbear, I forbear because I do not believe it would help to save the Union." But Lincoln ended his letter to Greeley with a noteworthy coda, "I have here stated my purpose according to my view of official duty; and I intend no modification of my oft-expressed personal wish that all men every where could be free." The President chose not to share with Greeley and the Tribune readers a more momentous statement: that he had, in fact, already drafted a proclamation of emancipation and was simply awaiting an auspicious time to promulgate it. Lincoln knew that if the Union could be saved "without freeing any slave," its salvation would be short-lived.

Lincoln read the first draft of what came to be known as the Preliminary Emancipation Proclamation to his cabinet on 22 July 1862. Given the criticism directed at Lincoln for moving too slowly on the issue of emancipation, it is worth noting that this first reading took place just sixteen months after he had pledged not to "interfere with the institution of slavery in the States where it exists." He continued to revise the document throughout the summer and, following the Union victory at Antietam, he issued the preliminary proclamation—which managed to balance daring with prudence—on 22 September. This first proclamation essentially gave the Rebel States one hundred days to return to the Union, after which period any slaves within their borders would be "then, thenceforward, and forever free." Any rebellious states that returned to the Union in the interim would be able to adopt immediate or gradual—and compensated—abolition of slavery within their borders.

This official State Department edition was printed with Lincoln's original manuscript serving as copy text, and is very rare: copies are located at the Library of Congress, the National Archives, Yale, Brown, and the Clements Library. According to Charles Eberstadt's exhaustive study, this printing was preceded only by a three-page circular, Notice of Issuance of Proclamation Emancipating Slaves in States in Rebellion on January 1, 1865, known only by a copy in Eberstadt's personal collection (Eberstadt 1); and, possibly, by an official State Department issue that did not include Seward's transmittal letter (Eberstadt 2). However, no copy of this second printing has ever been recorded, and Eberstadt simply inferred its existence "from the standing operating procedure applicable to documents of this nature."

Secretary Seward's transmittal letter is directed "To the Diplomatic and Consular Officers of the United States in foreign countries," and explains and summarizes Lincoln's Proclamation: "In the judgment of the President the time has come for setting forth the great fact distinctly for the serious consideration of the people in [the insurrectionary] States, and for giving them to understand that if they will persist in forcing upon the country a choice between the dissolution of this necessary and beneficent Government or a relinquishment of the protection of slavery, it is the Union, and not slavery, that must be maintained and preserved. With this view the President has issued a proclamation in which he gives notice that slavery will no longer be recognized in any State which shall be found in armed rebellion on the first of January next."

A key document in United States history and a vital step towards the emancipation of enslaved Americans.