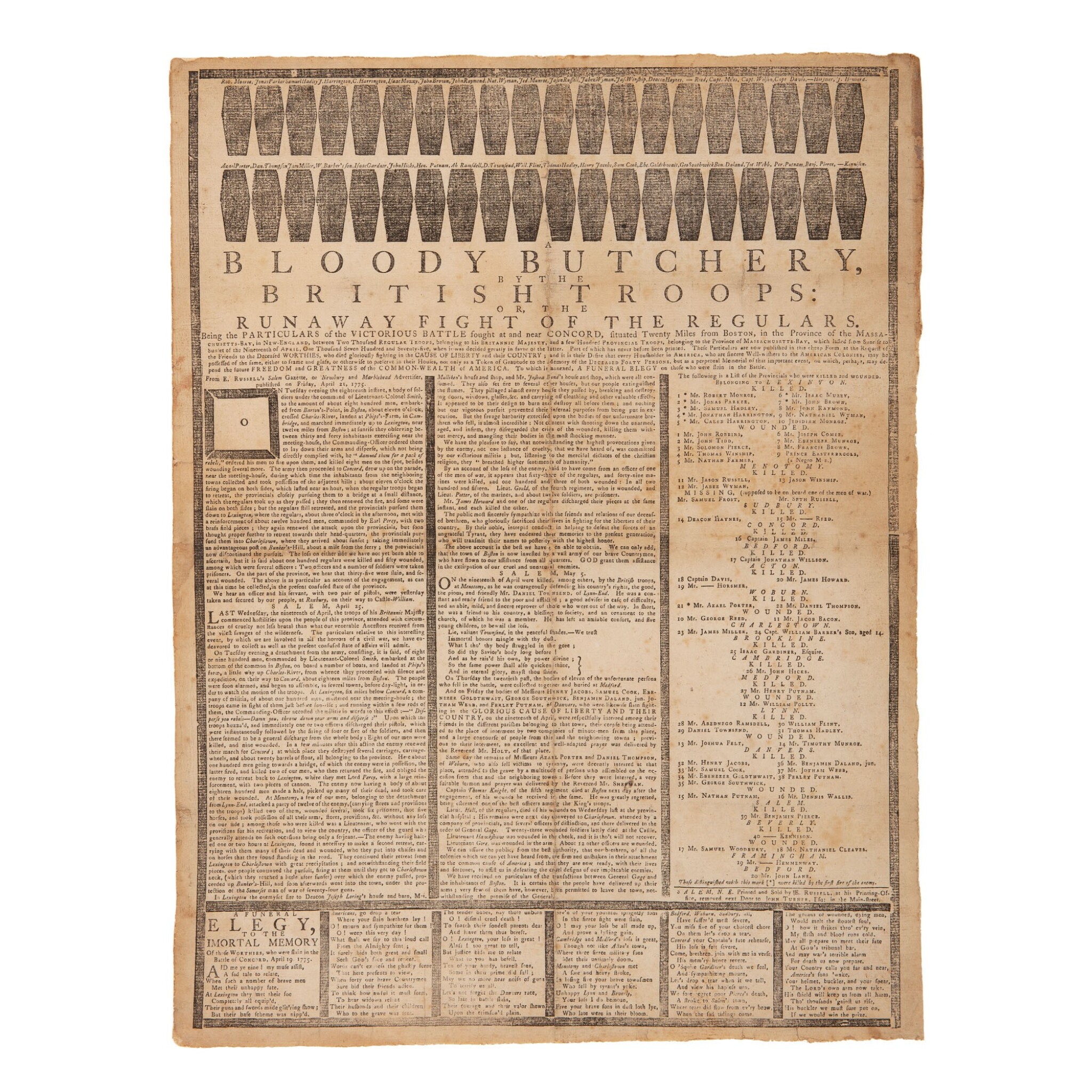 A Bloody Butchery, by the British Troops: or, The Runaway Fight of the Regulars. Being the Particulars of the Victorious Battle Fought at and near Concord … between Two Thousand Regular Troops, belonging to his Britannic Majesty, and a Few Hundred Provincial Troops. … Salem, N.E.: Printed and Sold by E. Russell, at his Printing-Office, removed next door to John Turner, Esq; in the Main-Street, [1775]

The rare and justly celebrated Bloody Butchery broadside, one of the most stirring and iconic broadsides produced in Revolutionary America. This record of the first fruits of "the shot heard 'round the world" details the movements and casualties of the renowned battles at Lexington and Concord and calls local patriots to assistance. As a contemporary news account, the broadside is remarkably accurate, both in reporting troop strength and casualties suffered, and in recognizing the importance of the 19 April encounter, which the headline terms an "important event, on which, perhaps, may depend the future Freedom and Greatness of the Commonwealth of America."

The broadside prints dispatches from Salem datelined 21 April (reprinted from Russell's Salem Gazette), 25 April (reprinted from the Salem Essex Gazette), and 5 May 1775. A table identifying by hometown the colonial dead and wounded occupies the third column. The appended "A Funeral Elegy to the Imortal Memory of those Worthies, who were slain in the Battle of Concord, April 19, 1775"—which was first printed in the Newburyport Essex Journal and Merrimack Packet—sounds the battle cry of the Revolution: "Your country calls you far and near, | America's sons awake, | Your helmet, buckler, and your spear, | The Lord's own arm now make."

Bloody Butchery was printed by the prolific Ezekiel Russell, who two months later issued a similar broadside commemorating the colonial victory at Bunker Hill. The entrepreneurial printer suggests in the headline that "every Householder in America, who are sincere Well-wishers to the American Colonies" will want a copy of Bloody Butchery "either to frame and glass, or otherwise to preserve in their Houses."

The demand for the Concord broadside must have been strong, as three issues have been identified: the first, with no imprint; the second, like the present copy, with a two-line imprint; and the third, with a five-line imprint and the notation, "The Second Edition, corrected, with some Additions." (The most significant addition made to the earlier issues is two more coffins in the head-band, representing two additional American dead.)

The popularity of Bloody Butchery is also evidenced by its rarity: most copies of all three issues must have been literally used up in various memorial displays created by aggrieved patriots. And, to judge by the illustration of the copy in the British Library's exhibition catalogue The American War of Independence, 1975, the Bloody Butchery broadside in the BL is a nineteenth-century type facsimile.