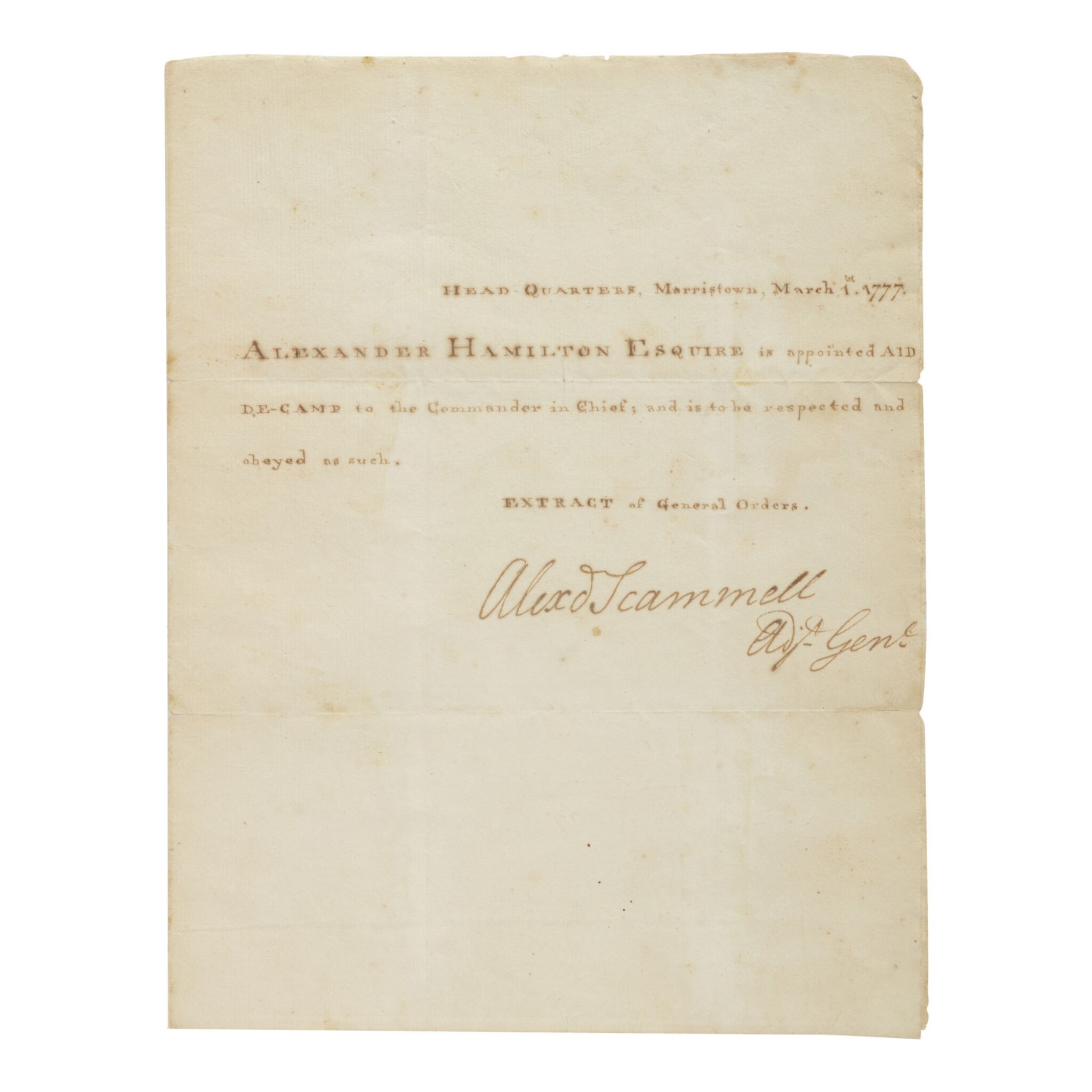 The launch of one of the most consequential careers in American public life: "Alexander Hamilton Esquire is appointed Aid de-Camp to the Commander in Chief; and is to be respected and obeyed as such."

This extract from Washington's General Orders of 1 March 1777 was made expressly for presentation to Alexander Hamilton. The full text of that day's General Orders begins with passwords of the day ("Dorchester," to be answered "Derby"), and continues:

"Alexander Hamilton Esqr: is appointed Aide-De-Camp to the Commander in Chief, and is to be respected and obeyed as such.

"Isaac Budd Dunn Esqr: will do the duty of Adjutant General, Pro Tempore, and to be attended to accordingly" (Papers of George Washington, Revolutionary War Series, ed. Twohig, 8:468). (Major Dunn acted as adjutant general until 9 April 1777, when he was sent to join Major General St. Clair in Philadelphia.)

It remains unknown just how Hamilton came to the attention of Washington, but he may well have been invited to join the General's staff on 20 January 1777. In a letter of that date to Lieutenant Colonel Robert Hanson Harrison, Washington requested that Harrison "Be so good as to forward the Inclosed to Captain Hamilton." This enclosure has not been found, but it led to one of the most significant associations in American history. Hamilton remained on General Washington's staff throughout the Revolution and later served as arguably the most influential member of President Washington's cabinet.

Arthur Lefkowitz has identified among Washington's aides "a brilliant cadre" of three: Robert Hanson Harrison, Tench Tilghman, and Hamilton. Among Hamilton's great strengths were his initiative and ambition. Hamilton "did his share of routine headquarters work, but Washington tended to use him for more important military and political missions where superior intelligence, quick thinking, and aggressiveness were necessary. Washington recognized Hamilton's superior intelligence and kept him at headquarters long after the young man wanted to command troops in battle" (George Washington's Indispensable Men: The 32 Aides-de-Camp Who Helped Win American Independence, p. 110). But while it is undoubtedly true that Harrison, Tilghman, and many other of Washington's aides—Richard Varick, James McHenry, Jonathan Trumbull Jr., John Laurens, Joseph Reed, and Richard Kidder Meade among them—made great contributions to American independence, in the constellation of Washington's aides-de-camp, Hamilton's star shone brightest.

Hamilton’s commission is one of the most consequential documents in American history—the appointment that made possible the meteoric and momentous career of the most unlikely of the Founding Fathers. Ira Lipman acquired the document when it reappeared at an auction of letters and papers descended in Hamilton’s family after being lost from sight for more than a century. Harold C. Syrett's standard edition of The Papers of Alexander Hamilton takes its text from the illustration of the document in Allan McLane Hamilton's Intimate Life of Alexander Hamilton (New York: Charles Scribner's Sons, 1910) and notes "H[amilton]'s copy of the General Orders has not been found."

Without the position granted by this commission, Hamilton might never had the opportunity to fill his many other roles: congressman, founder of the Bank of New York, New York state assemblyman, member of the Constitutional Convention and the New York Ratifying Convention, essayist responsible for the majority of the Federalist Papers and all of the Pacificus Papers, first Secretary of the Treasury, founder of the New York Post, and a titanic force in the country’s first four presidential elections. As a leading advocate of a strong central government and the engineer of the United States economy, Hamilton can well be considered the most significant American public figure not to hold the presidency.

Celebration of My Country 76; The Papers of Alexander Hamilton, ed. Syrett, 1:196