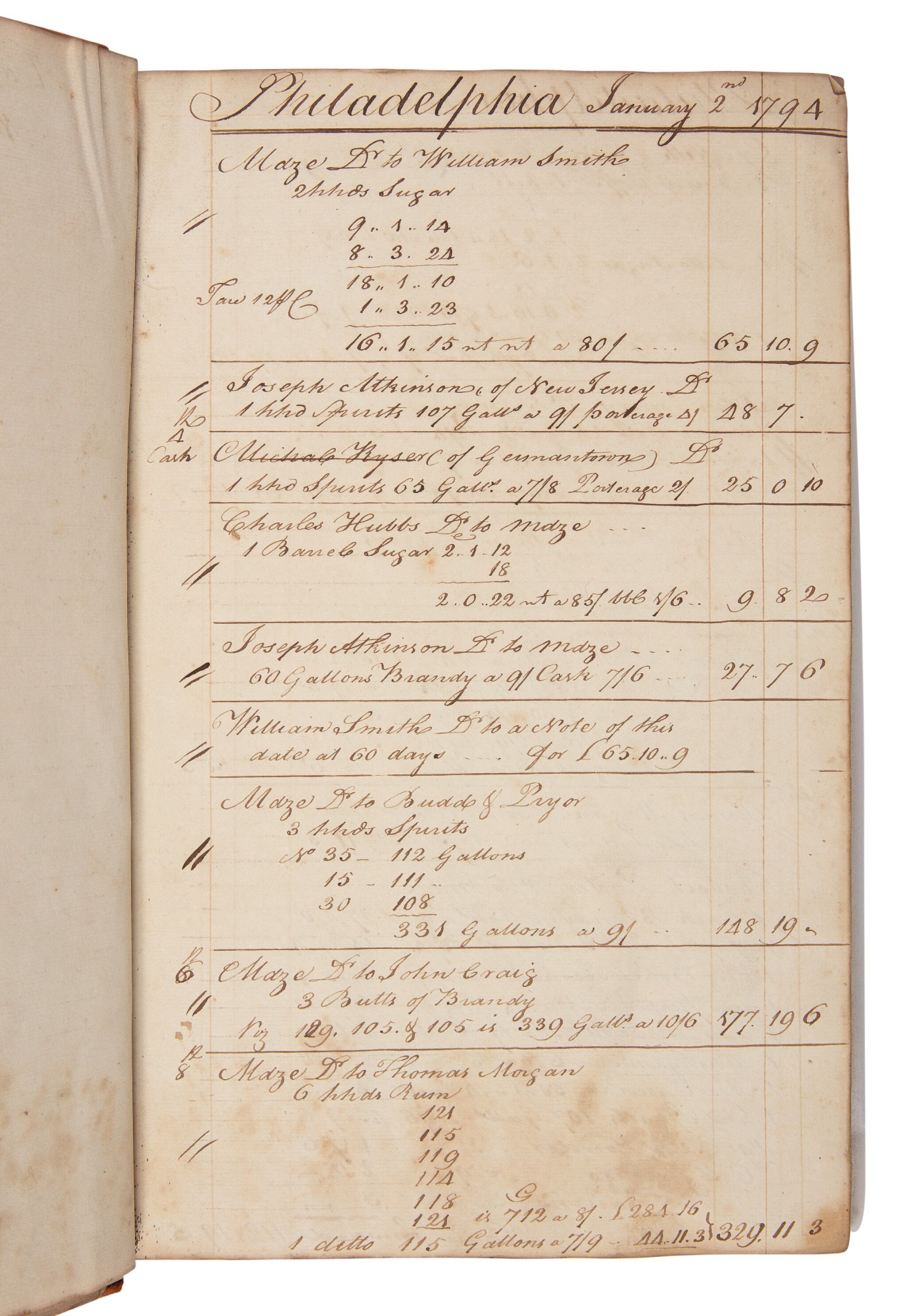 A significant manuscript ledger and wastebook of two Philadelphia traders, Charles and David Evans, comprising a compendium of a transaction log and a section of longer form entries, with each section commencing at opposite ends of the volume. The portion documenting transactions thoroughly covers a period beginning January 2, 1794 and substantively ending on December 28, 1795, with a few additional entries for 1796 and 1797. During this period, the Evanses kept track of hundreds of transactions involving a wide range of commodities. The second part of the volume transcribes hundreds of contemporary testimonies from Quaker meetings in Pennsylvania, New Jersey, and New York, although there are also a number of transcriptions of testimonies that took place as far away as London and Newcastle, and as far back as 1699. It seems likely, therefore, that the David Evans who helped to compile this volume is the cabinetmaker and Quaker minister who lived in Philadelphia during this time

The Evans family apparently kept up a brisk business over the years covered by the ledger, which shows transactions with a large number of Philadelphians. The merchants traded a high volume of alcohol, including rum, gin, and wine from different parts of the world (the book refers to products such as "Tenerife wine" and "Lisbon wine"). They also traded heavily in sugar and various spices, such as pepper, cloves, mustard, and nutmeg, coffee and tea, and staple products such as rice, pork, cotton, and paper. The majority of testimonies found in the second part of the volume relate to the beliefs and actions of individuals in Quaker communities in the region of Philadelphia. Many are contemporary with the keeping of the ledger; however, they include testimonies transcribed from across the eighteenth century and the end of the seventeenth century, which are often conversion narratives. Each testimony is headed by a standard title giving the full name of the speaker and the place where the Quaker meeting took place. These testimonies are preceded by several leaves that give some information on the Evans's involvement in a group buying tickets for the Susquehanna Canal lottery, a memorandum on different types of judicial judgments, and three leaves providing a short list account of all goods purchased in 1794 and 1795.