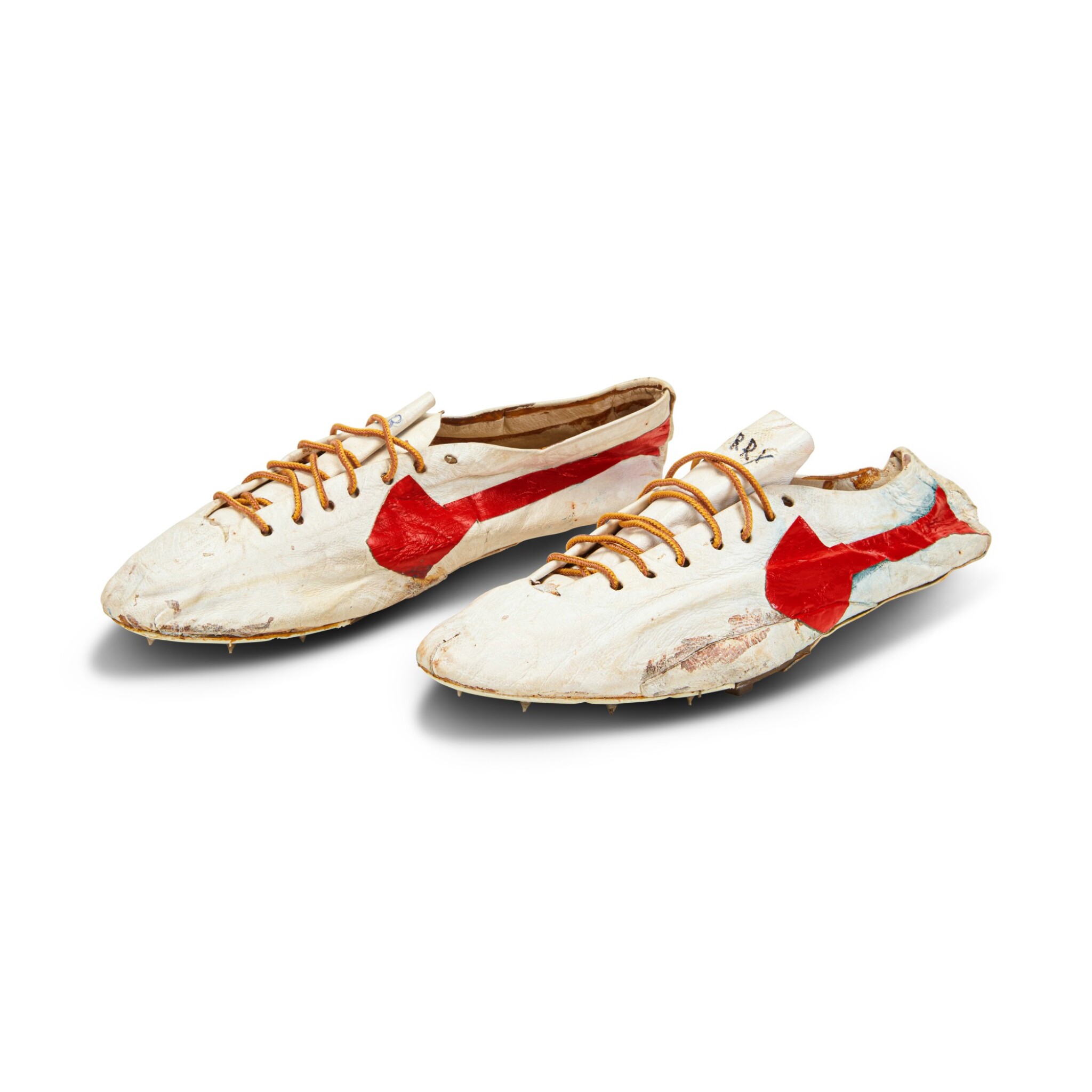 Shoes date to 60s, with most recent modification completed in early 70s

The track shoes are in excellent overall condition. There is slight peeling to logos in certain areas.

Bill Bowerman is the heart of Nike. Bowerman, one of Nike’s founders, was one of the greatest innovators of his generation in regards to shoe ingenuity and design. Obsessed with weight and performance, Bowerman would build shoes for his University of Oregon runners from scratch, often using an assemblage of raw materials. This pair, made by Nike’s Co-Founder for Harry Jerome (a Canadian Track and Field sprinter and Olympian), represents an important chapter in the origin of one of America’s greatest companies, Nike.

Most notably, the pair features the use of 4 prototype logos, which bear a remarkable resemblance to the Nike Swoosh. The shoes additionally feature, under each set of track spikes, Waffle soles – the first notable innovation introduced by Nike when they premiered the Nike Moon Shoe at the 1972 Olympic Trials.

The waffles of course, represent an important moment in the history of footwear, as Bill invented the design after being inspired by his wife’s waffle iron. The uppers show wear, but the waffles, spikes and bottoms appear mint. The reason for this is that Bill was constantly tinkering and modifying his shoes, and Bowerman modified the shoes with the current soles, after which point they were never worn again.

The shoes themselves were produced in the 60s, with their most recent modification – the waffle sole – being added by Bowerman in the early 70s as Nike was taking form as a company, switching over from Blue Ribbon Sports. Brown glue can be seen throughout the uppers, especially where layers of material are held together. Unfortunately, as a result of this intensive and careful process – often undertaken in places without the proper ventilation – Bill would later suffer from nerve damage that would require him to walk with a cane.

Harry Jerome – for whom the shoes were originally made – set a total of 7 world records over the course of his career and most notably took home the Bronze Medal for Canada in the 1964 Summer Olympic Games in Tokyo, Japan – notably, the last time the Olympics took place in Japan.