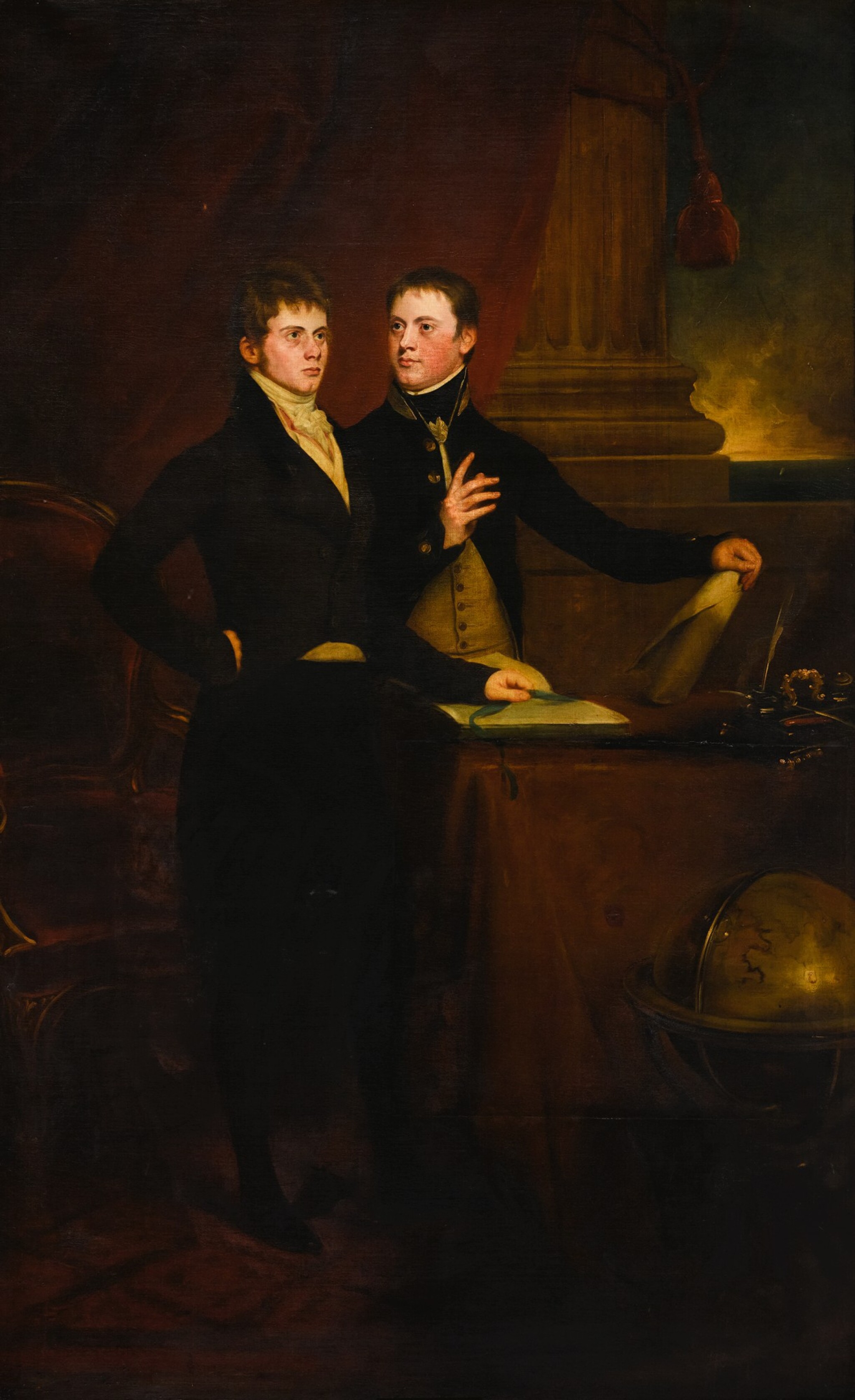 The canvas is lined, and the paint surface is slightly dirty with a yellowed varnish. The edges of the rectangular addition along the right margin just below centre are visible to the naked eye. Also visible to the naked eye is a repaired damage in between the legs of Edward on the left (approx. 3 x 6cm.). Inspection under ultraviolet light reveals a thick and milky varnish underneath which the aforementioned repaired damage is revealed, but otherwise almost no other intervention is visible. There is a patch of more recent retouching in the proper right fingers of Norton measuring approx. 3 x 1cm. The painting appears in overall very good condition.

Painted in 1800-03, this magnificent double portrait was once part of a much larger portrait of the Knatchbull family, which is known from a sketch by Copley (see lot 170). The grand enterprise was envisaged and commissioned by the father of the two brothers in the present portrait, Sir Edward Knatchbull, 8th Bt. Copley began the undertaking in September 1800 and he was not to finish the work until April 1803. The process was complicated by the fraught relationship between Copley and Sir Edward, and the difficulty of family jealousies. Sir Edwards's third wife, Mary, wanted her husband's first wife painted out, and for her portrait to replace that of Sir Edward's second wife. Copley sidestepped the difficulty by placing Sir Edward's two former wives in the sky looking benignly downwards from Heaven.

It is of no surprise to find that there was intense disagreement over the price which should be paid. The dispute was eventually put to a committee of the Royal Academicians, with Copley receiving a total of £1400. The angel figures of Sir Edward's two wives were eventually painted out, and over time the individual portraits were cut out and given to various members of the family. The sitter to the far left of the present portrait is Edward, son of Sir Edward Knatchbull, 8th Bt., and his first wife, Mary, daughter of William Western Hugessen (see lot 241). He succeeded his father as M.P. for Kent in 1819. The second sitter is Edward's brother, Norton (see lot 172). He was an officer in the Royal Navy and in the present picture he wears naval uniform. He served aboard Nelson's flagship H.M.S. St Joseph, and in 1801 the two brothers were able to spend time together when Norton's ship was anchored at Torbay, and Edward had been sent by his father to visit a sick friend in the neighbouring area of Torquay. Norton was taken ill soon after and died in March the same year.