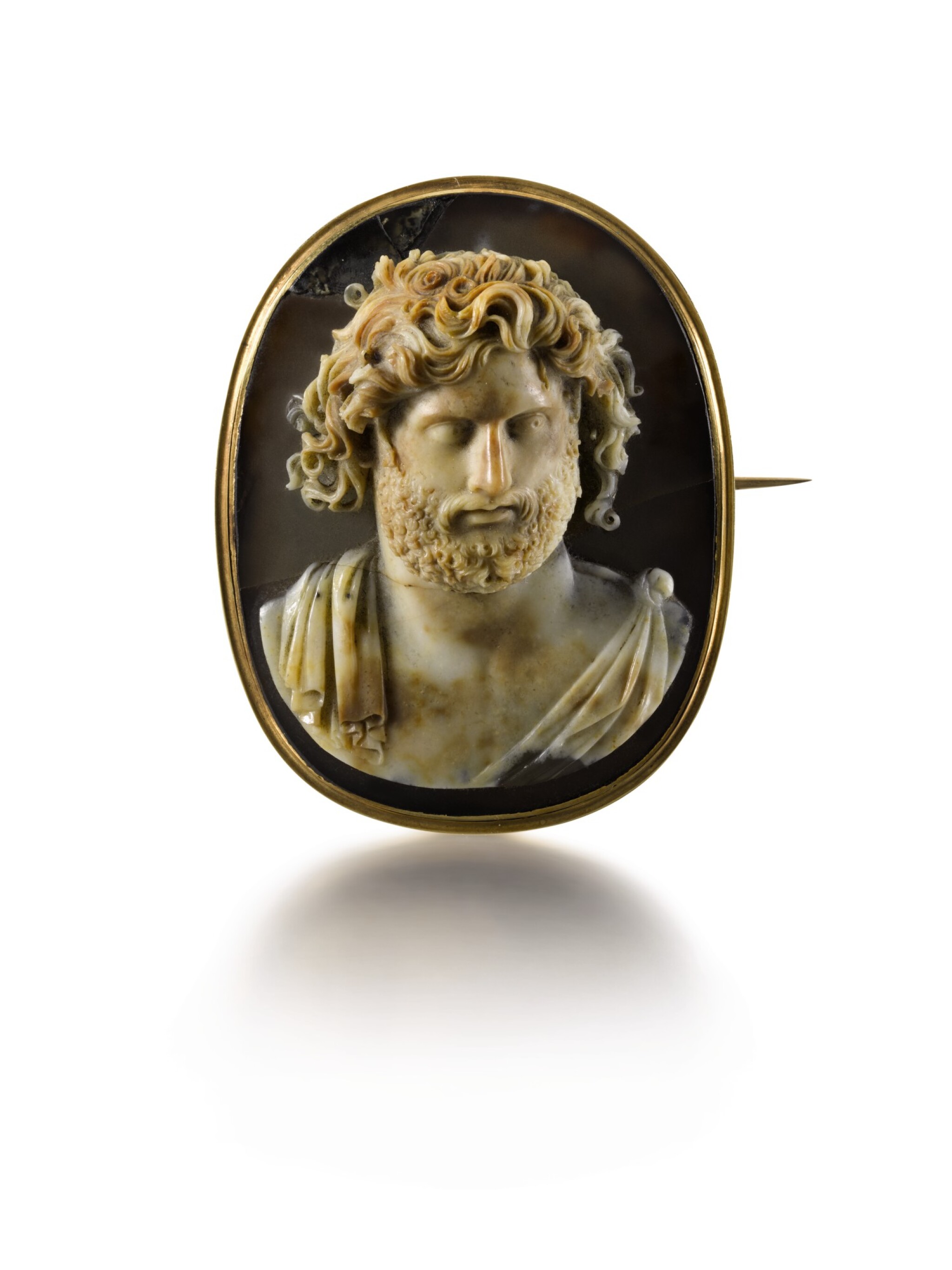 An exceptionally large cameo with a hero all'antica

chalcedony, within a brooch mount

Overall the condition of the cameo is good with minor dirt and wear to the surface consistent with age. There is a stable slightly visible fracture running diagonally from left to right and through the neck beneath the chin. There is a section of fractures (and possible replacements) to the ground at the upper left side above the head. It is possible that these factures could be deliberate in order to make the cameo look ancient. There are a few small losses to the locks of hair, in particular to the proper right side of the head. There are a few small chips to the edges of the drapery. There are natural tonal differences in the stone, in particular to the chest and nose. There are further flecks of natural veining including to the forehead. There is a very minor fissure or slightly open vein running from the forehead down the nose. Minor general wear to the brooch mount.

This exceptionally large cameo exhibits beautiful carving particularly in the undercutting of the hair and drapery, which falls in swallow tail folds from the proper right shoulder. The subject is likely to be a classical hero or perhaps the gods Jupiter or Mars. With his rich flowing locks of hair, he resembles the archetypal hero, Alexander the Great. The facial type with beard is nonetheless reminiscent of portraits of the Emperor Hadrian.

The Mountbatten cameo is indebted to antique prototypes in which the head is carved in high relief and is placed in three quarter profile. This type of composition is exemplified by the celebrated 1st-century BC cameo with Augustus from Saint Denis and now in the Cabinet des médailles, Bnf, Paris (inv. no. 233). As a corollary, the present cameo likewise recalls early 16th-century Venetian sculpture which was highly influenced by ancient models. The manner in which the subject seemingly bursts out of the field of the relief, and, lips parted, appears to engage the viewer, finds a similarity in Tullio Lombardo's marble relief heads which reference ancient Roman funerary sculptures; cf the Bacchus and Ariadne in the Kunsthistorisches Museum, Vienna (illustrated in Luchs, op. cit., no 70).

The Mountbatten cameo is likely to date to the 18th century since it finds comparisons in a number of Neoclassical glyptics in public institutions. The high quality of the carving arguably places it in the top rank of cameos executed at the end of the 18th century. A comparison, though of considerably smaller dimensions, is found in a circa 1800 cameo with Demosthenes formerly in the collection of the dukes of Hamilton at Hamilton Palace, and subsequently owned by Thomas Flannery, sold in these rooms on 1 December 1983, lot 295; and which is now in the Guy Ladrière collection, Paris, published by Boardman, Scarisbrick and Wagner, op. cit., p. 42. For Neoclassical all'antica heads of similarly large dimensions compare with those in the Staatlichen Münzsammlung, Münich, published by Weber, op. cit., nos. 170-172. With the flowing, curling, locks of hair, there is a link to 18th-century cameos with Laocoön; see, for example, the 18th-century cameo ascribed to Flavio Sirletti by Mariette, formerly in the Bessborough and Marlborough collections and published by Boardman et al, op. cit., p. 164, no. 359.

The Mountbatten gem compares closely with a cameo with an old man carved by Niccolò Morelli (1771-1838) in the Hermitage Museum, Saint Petersburg (inv. no. K-5588). Note the similar three-quarter profile and incised eyes with a heavy brow. The comparison is such that a tentative attribution for the Mountbatten cameo to Niccolò Morelli should be considered. Compare also with works by Antonio Berini (1770-1861) such as his Serapis in the Santarelli collection at the Capitoline Museums, Rome (inv. no. F204).