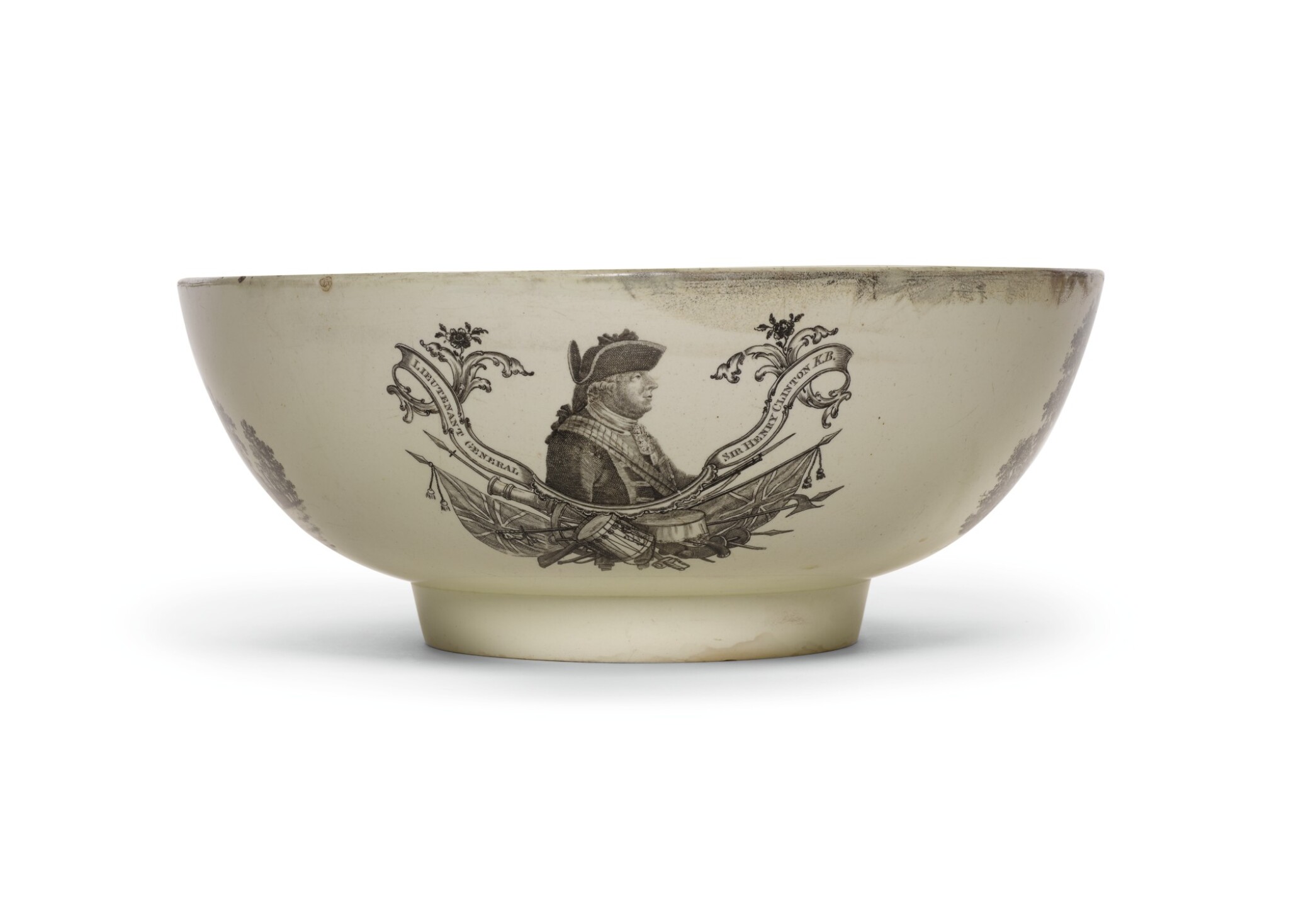 the interior printed with the 'The Death of General Wolfe', after Benjamin West, the side with a portrait of Lt. Gen. Sir Henry Clinton, K.B. above an inscribed banner and trophies and three vignettes of rural landscapes, impressed lower case mark

together with; after Benjamin West, The Death of General Wolfe, a line engraving by William Woollett, from 1776 (visible sheet 48 by 61.5cm.) and a small engraving of the same, with an over-typed and manuscript key of those depicted (17.5 by 23cm.), both framed and glazed

The bowl in generally good order with two faint short hairline crack from the rim at 5 and 8 o'clock. A small glaze flake to rim and some minor wear and staining. The larger of the two prints that accompany the bowl is very decorative. The sheet is stained and there are signs of foxing. There is a small historic tear to each short side of the margin. There are some notable stains to the lower margin. The 'Hogarth' type frame with chips and separations to the frame at the mitred corners. This piece is in unrestored condition. The smaller print appears to be a leaf from a book (or a printed copy), and has been crudely over-typed with names and inked numbers. The impression with marks. Frame with losses to gilt decoration. Sheet with old marks and stains. Neither print has been inspected out of its frame.

Possibly acquired by Admiral of the Fleet Sir Richard Howe, 1st and last Earl Howe KG (1726-1799), the Victor of the Glorious 1st of June and brother of Sir William, later General and 5th Viscount Howe (1729-1814);
Or possibly acquired by the 1st Earl's daughter, Louise-Catherine, Marchioness of Sligo (1767-1817)
This creamware bowl and the prints that accompany it commemorate one of the great pictures of the 18th century by Benjamin West. The painting depicts the death of Major-General James Wolfe (1727-1759) and was a popular image, widely disseminated through transfer decoration on ceramics and printing. Wolfe is shown amidst the Battle of Quebec, in 1759, his triumph. British redcoats break through the French lines after only fifteen minutes of fighting, a seminal episode in the Seven Years War with Wolfes dramatic death conceived as the focus for the composition. The figures which surround him were key personalities in that war and include, leaning in on the left of the composition, Sir William Howe (1729-1814). After the battle Sir William became, General, 5th Viscount Howe. He was one of three brothers who had distinguished military careers, including Admiral of the Fleet Richard Howe, 1st Earl Howe, KG (1726–1799).

West painted a number of variants of the composition, the prime versions of which are those in the National Gallery of Canada, Ottawa, and the Royal Collection, London.