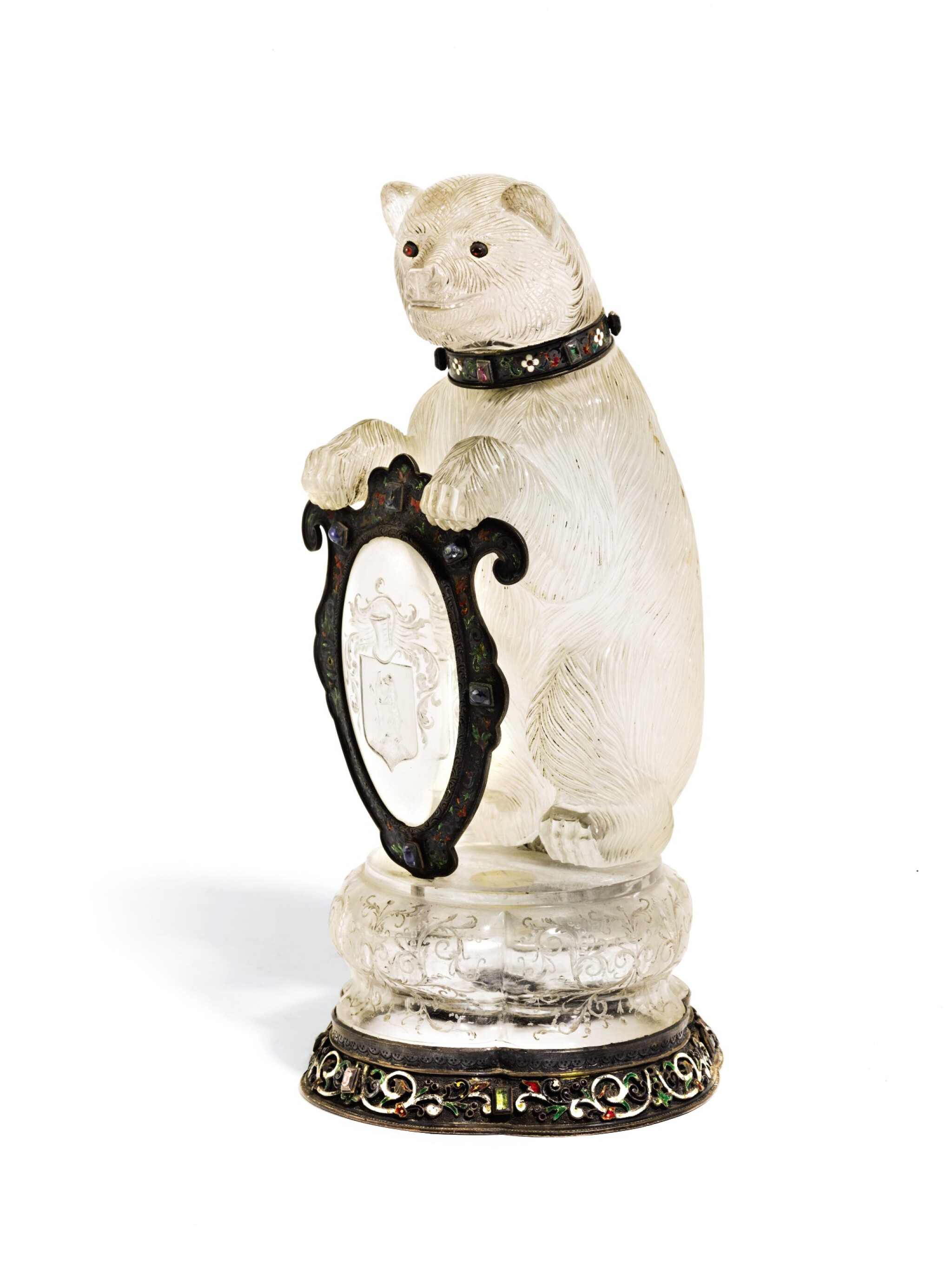 carved as a friendly bear standing on his back legs, holding a shield with a carved coat of arms of a bear below a book and within scrollwork, in a jewelled enamel frame, the removable head set with garnet eyes and a silver collar with enamelled floral decoration and alternating collet-set garnets and emeralds, supported on a stepped lobed base, carved with foliage, maker's mark, Diana's head town mark with scallopped rim

While figures of bears often serve as classic heraldic animals in silver or silver-gilt objects of Northern European or German origin, the model in the present lot bears strong resemblance to a stone bear statue in the Bosco Sacro (fig. 1), also called Bosco dei Mostri ('Monsters' Grove'), in Bomarzo, a small town 42 miles northwest of Rome. The bear is closely linked to the Orsini family who used bears ('orsi') as supports for their coat of arms. The Sacred Grove in Bomarzo was created by Pier Francesco Orsini, called Vicino (1528–1588), a mecenary and great patron of the arts, for reasons which still partially remain mysterious. The park with all of its curious larger-than-life size creatures accompanied by enigmatic verses in Italian, was intended to astonish, and it survived as a private park until today. Some of the animals were referenced in other categories such as the decorative arts, especially in the revivalist 19th century, as the present lot by the renowned Viennese goldsmith and lapidary Hermann Ratzersdorfer may demonstrate.

Hermann Samuel, eldest son of Salomon Ratzersdorfer, a dealer in antiques, was born on 16 May 1815 in Pressburg (Bratislava). According to Sigmund Meyer, Hermann moved to Vienna in the early 1840s with the purpose of opening a factory, then the first of its kind there, to initially manufacture 18th century reproductions (Sigmund Mayer, Die Wiener Juden 1700-1900, Vienna/Berlin, 1917, p. 151). His first enterprise was registered in December 1843 for the production of Rococo Galanteriewaren (small precious objects with a function). Following a very successful showing at the Wiener Gewerbsprodukten-Ausstellung in 1845, he was authorised to expand into all branches of gold and silver work. At the London Great Exhibition of 1851, Ratzersdorfer was one of only four exhibitors from the Austrian Empire to show goldsmiths’ work, to the chagrin of the organisers who nevertheless had to award him the Jury medal for ‘a toilet glass in a massive wrought and embossed silver frame, weighing 135 ounces’. Further prizes were soon to follow as Ratzersdorfer changed direction from reproductions of the Rococo to those of the Renaissance for which he is known today, among them the present lot. For the ill-fated Vienna International Exhibition of 1873, he created a dazzling display of elaborately enamelled and mounted crystal objects. By 1881, Hermann had handed over the reins to his son Julius who seems to have continued in business for only a few years after his father’s death in 1891, still focusing on reviving old techniques and skills and creating fantastic Historismus objects from most precious materials.