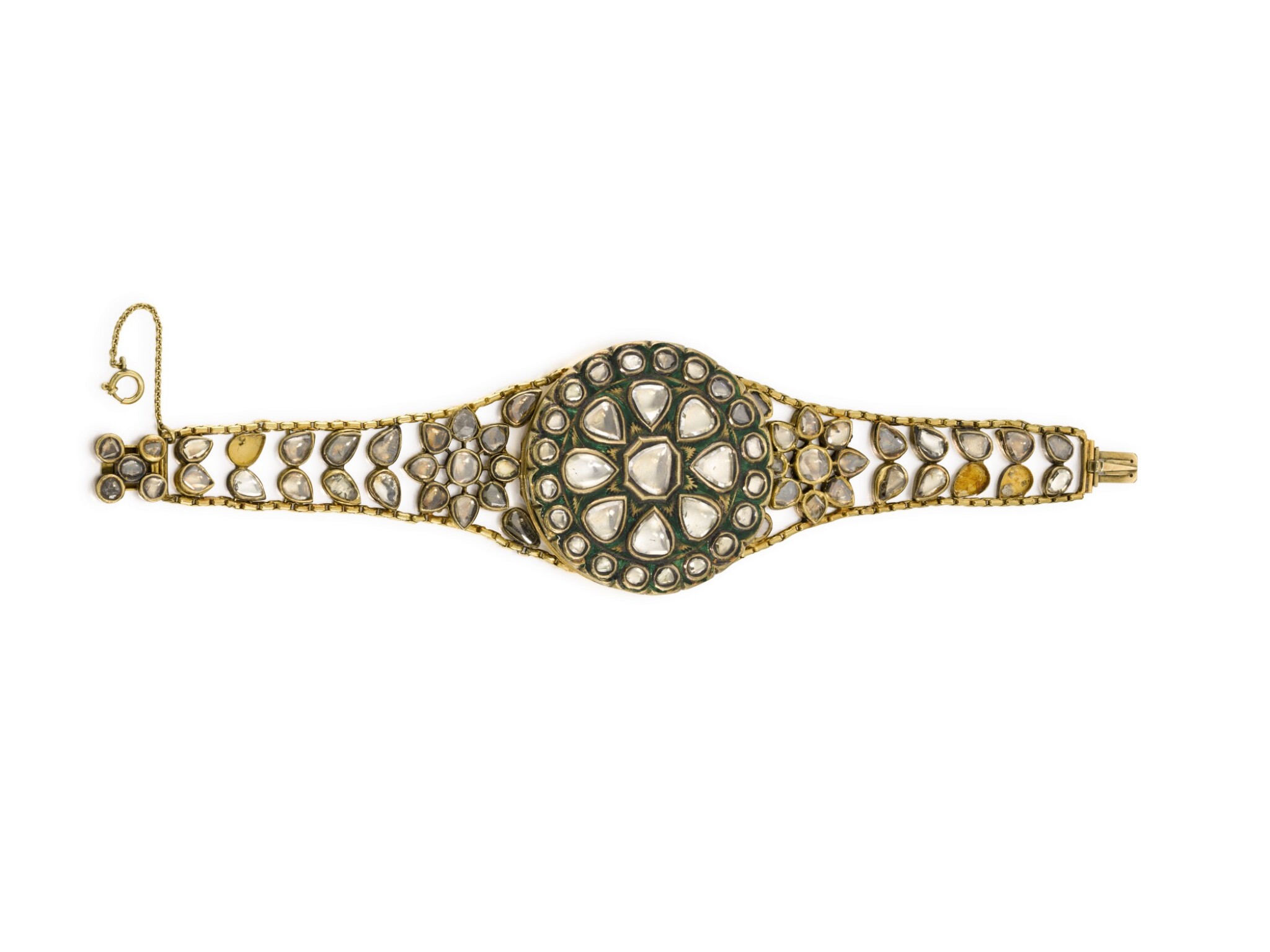 applied with green enamel and set with flat-cut diamonds, opening to reveal a portrait miniature of Prince Albert as a child, the portrait signed, dated and inscribed on the reverse in red enamel, 'H.R.H./ Prince Albert/ when about 6 years old/ London May 1842. Painted/ by Henry Pierce Bone/ Enamel Painter to her Majesty & From the/ Original by Meijern'

The bracelet appears to be made of composite elements, some of the diamond settings on the bracelet have been repaired, a few stones appear to be later replacements, some oxidisation to the foiling underneath the stones, three stones are missing, minor wear to the green enamel, very light hairline scratches to the underside of the bracelet, the portrait appears to be in good condition, as viewed.

The portrait of Prince Albert is by the English miniature painter, Henry Pierce Bone (1779-1855), the eldest son of Henry Bone, who was Enamel Painter to George IV. He trained under his father and the two worked in collaboration until Henry Bone’s death in 1834. After his father, Henry Pierce Bone became the most successful enamellist of his time. He was appointed Enamel Painter to William IV in 1834, to the Duchess of Kent and Princess Victoria in 1833, and to Prince Albert in 1841.

It is interesting to note the similarities of the Prince’s features in the present lot with a painting in the Ehrenburg Palace Collection in Coburg, Germany. The painting is by the German portrait artist Ludwig Döll (1789-1863), dated circa 1823-24, and depicts Louise, Duchess of Saxe-Coburg and Gotha, with her children, Albert and his elder brother Ernst II. Ernst (1818-1893) succeeded their father, Ernst I, as Duke of Saxe-Goburg and Gotha in 1844. For a portrait miniature of Ernst as a young man, also attributed to Henry Pierce Bone, which sold in these rooms, see Sotheby’s London, 17 January 2019, Lot 103.

Queen Victoria is known to have commissioned portraits of her husband as child in various media. Magdalena Dalton (1801-74), miniature painter to the Queen, was commissioned to copy the oil painting by Ludwig Döll. Dalton produced a double watercolour portrait in circa 1846 of the princes as children, Albert seated with his brother Ernst standing by his side, both holding a rabbit. The watercolour is in the Royal Collection, United Kingdom, inv.no.RCIN 912109.

An exhibition in 2010 at The Queen’s Gallery, Buckingham Palace on Queen Victoria and Prince Albert illustrated how the Queen’s jewels reflected her relationship with her husband. Albert and Victoria often commissioned items of jewellery which they gave to each other at special occasions. Celebrated royal treasures of the Crown were of less interest to her than modest gifts and pledges of love exchanged with Albert. Miniatures of the Prince set as jewels were treasured by Victoria.