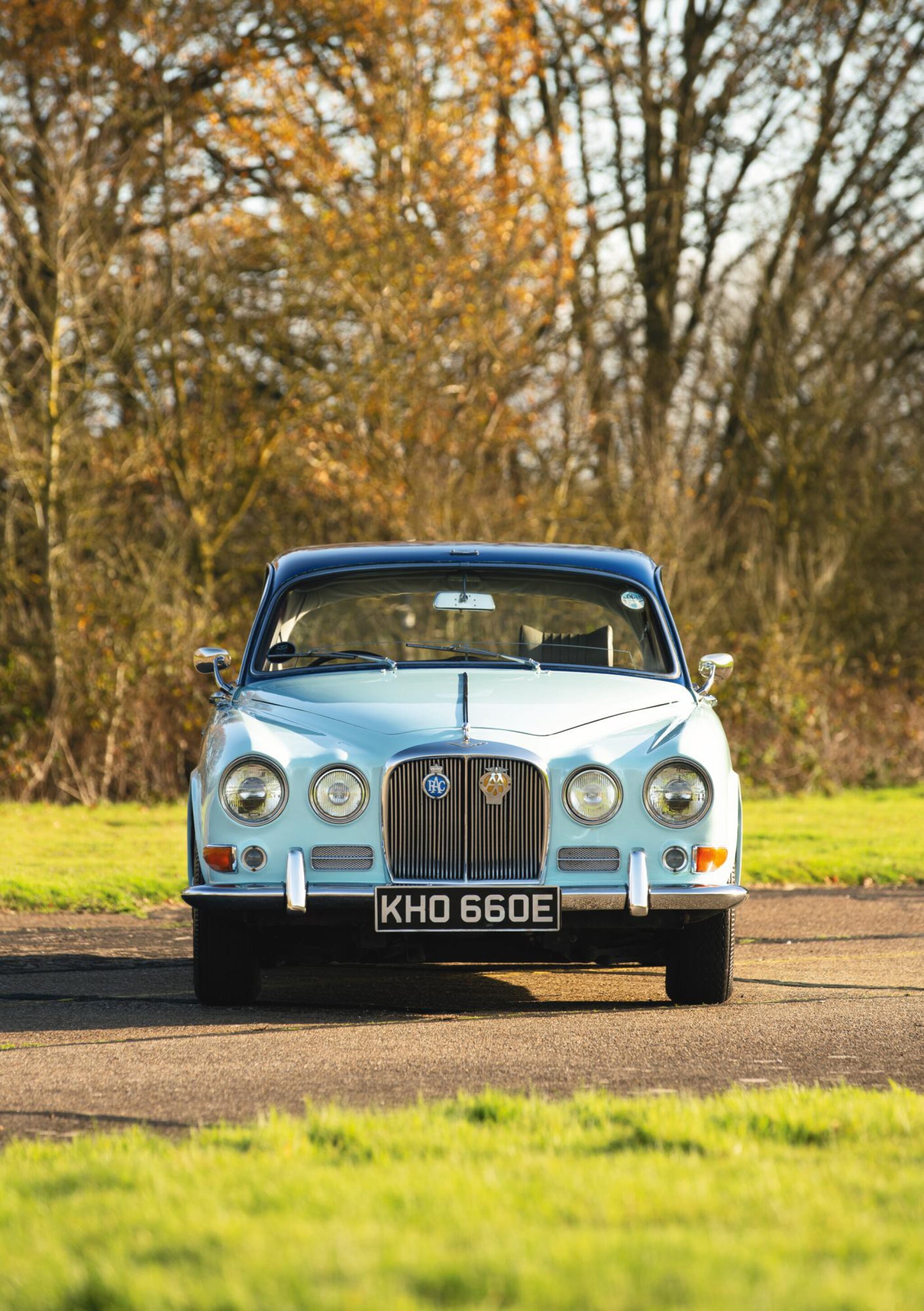 Purchased new by the Earl Mountbatten of Burma. Finished in 'Special Mountbatten Blue' livery and delivered to him through Henleys of London.

Re-acquired by a member of the Mountbatten family and offered from their ownership today.

To commemorate their wedding in 1922, Edwina gave her husband a Rolls Royce and for many years thereafter, Rolls Royce was Lord Mountbatten’s manufacturer of choice. This was except during his time as Supreme Allied Commander of the Southeast Asia Theatre when he was known to drive a Willys Jeep at speed with his arms and elbows almost level with his shoulders, for ‘the purpose of ventilation’. In later years his preferred manufacturer was Jaguar: completed by the company on February 27, 1967, this personalised 420 was delivered to him later that year.

An accompanying Jaguar Daimler Vehicle Information Sheet issued in the 1990s shows that the exterior colour is ‘Special Mountbatten Blue’ (paint code LSC 32872) over a Grey interior. This was a colour used on many of Lord Mountbatten’s personal automobiles. Further modifications include one of the first heated front windscreens fitted to any Jaguar and a passenger seat head restraint.

First registered April 19, 1967, its original logbook remains on file, confirming ‘Earl Mountbatten of Burma’ as the first owner, listing Broadlands, Mountbatten’s country home in Hampshire, as the registered address. The car appears to have remained in his ownership for two years before it passed onto his second owner. Appropriately, it has remained in the U.K. since new. The history file includes interesting correspondence between subsequent owners and members of the Mountbatten family and includes letters from Lady Pamela Hicks, Mountbatten’s younger daughter, and Lord Romsey, Mountbatten’s grandson. Lady Pamela, on behalf of Clive Debenham (the third owner of the Jaguar), asked Lord Mountbatten to sign the original logbook, which comes with the present vehicle. A subsequent owner, Sidney H. Grant had the car restored to its original condition by Vincent Coachworks, and the handwritten invoices for this work are included in the history file. In 2008, the car was reacquired by the Mountbatten family, and is offered from their ownership today, presenting as it was in Lord Mountbatten’s time. The roof still has the chrome mounting used to carry the royal emblem and Lord Mountbatten’s crest is on the doors. Surely amongst the most unique and interesting 420s, this Jaguar would be a welcome addition to any collection of British luxury automobiles.