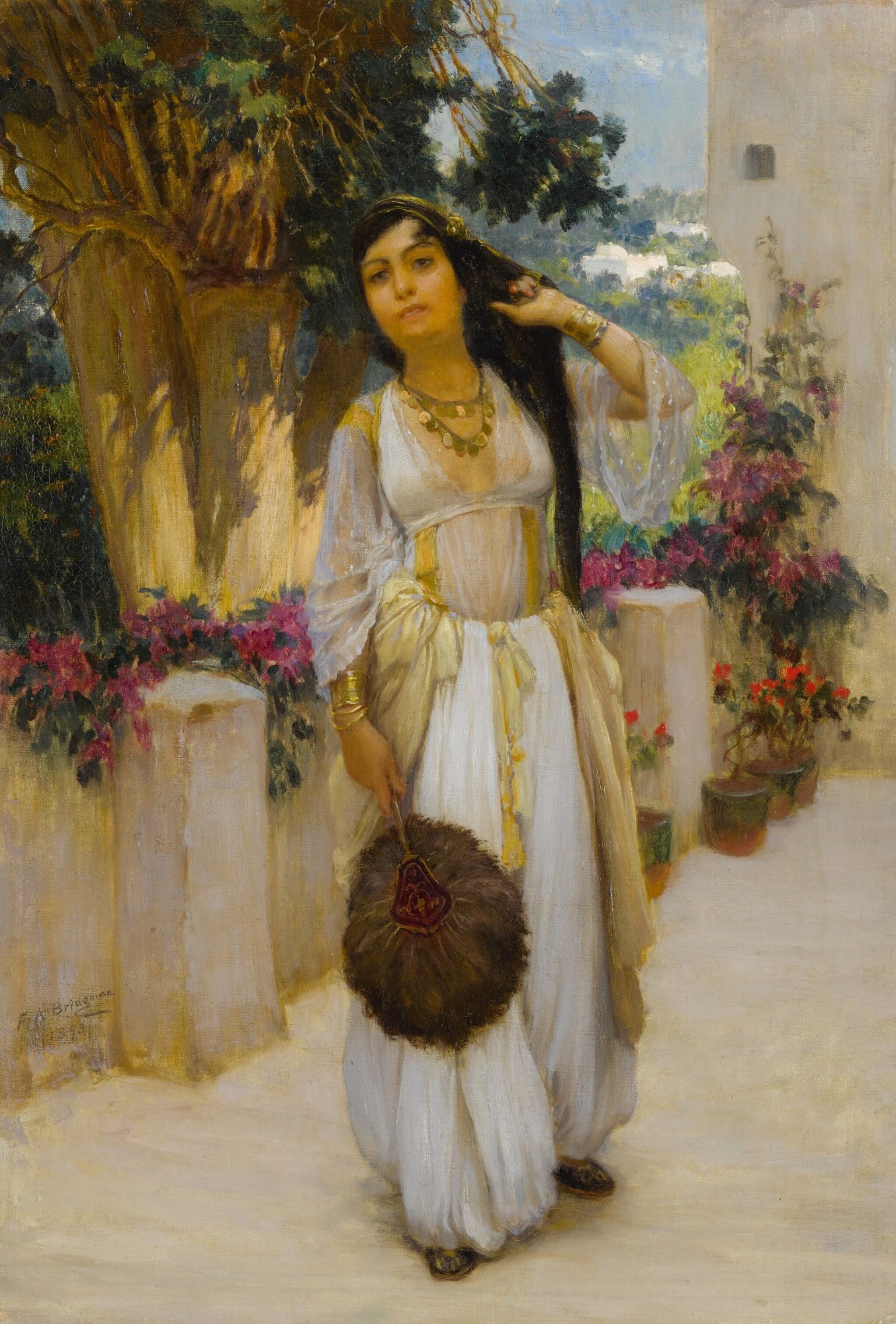 We thank Ilene Susan Fort, Ph.D., F. A. Bridgman authority, and Curator Emerita of American Art, Los Angeles County Museum of Art, for contributing to this catalogue entry and for confirming the authenticity of this work.

The following condition report was kindly provided by Simon Parkes Art Conservation, Inc.: This work is unlined and stretched on its original stretcher. The paint layer is clean and varnished. There is a small reinforcement on the reverse corresponding to a thin vertical line of retouches at the base of the wall in the lower left, measuring about 1 ½ inches. There are also two reinforcements in the upper center. One corresponds to a restoration in the trees in the upper left, which shows rather broad retouches under ultraviolet light. The other supports a restored T-shaped break in the canvas, with the horizontal arm crossing the neck of the figure and the vertical arm running through the hair to the right of the head; this break is slightly raised.

Private collection
Acquired from the above by the present owner

Standing on a sun-dappled veranda, Frederick A. Bridgman’s raven-haired beauty wears a diaphanous white and gold blouse and salwar trousers. She is richly bejeweled, with both wrists encircled by bracelets and her décolletage highlighted by a golden necklace, while her hair is encircled by a golden headband. The shade of a large tree, and her feathered fan, promise a moment of cool on a hot day.

Bridgman treated this subject three times, with the present work being the largest composition. The earliest version, dated 1886 (Private collection), is thinly painted and may be an oil sketch created in Algiers. It shares many compositional elements with the present work, such as the large tree, colorful flowers and distant architecture, but the figure on the veranda is a mirror image. The third version (location unknown) repeats the pose, facial expression, and most of the attire of the present work’s model, but Bridgman has placed her standing before a tree in a walled garden.

Bridgman did not initially set out to be an Orientalist. His artistic ambitions took him from New York to the artists’ colony in Pont-Aven in Brittany; thanks to the assistance of fellow artist Thomas Eakins, Bridgman shortly found himself in the enviable position of studying under Jean-Léon Gérôme where he would become one of his best pupils at the École des Beaux-Arts in Paris. Following his first trip to Cairo and Algeria in 1872, Bridgman turned almost exclusively to painting scenes of Egyptian and Algerian life. While staying with his family at the Hôtel de l'Orient in the Mustapha Supérieur quarter of Algiers, he used the services of a local guide, Belkassem, to gain access to private houses where he observed and painted from daily life. Bridgman's experiences in Algeria, and his prolific creative output, led to the publication of his book, Winters in Algiers, illustrated with woodcuts after the artist's drawings and paintings.