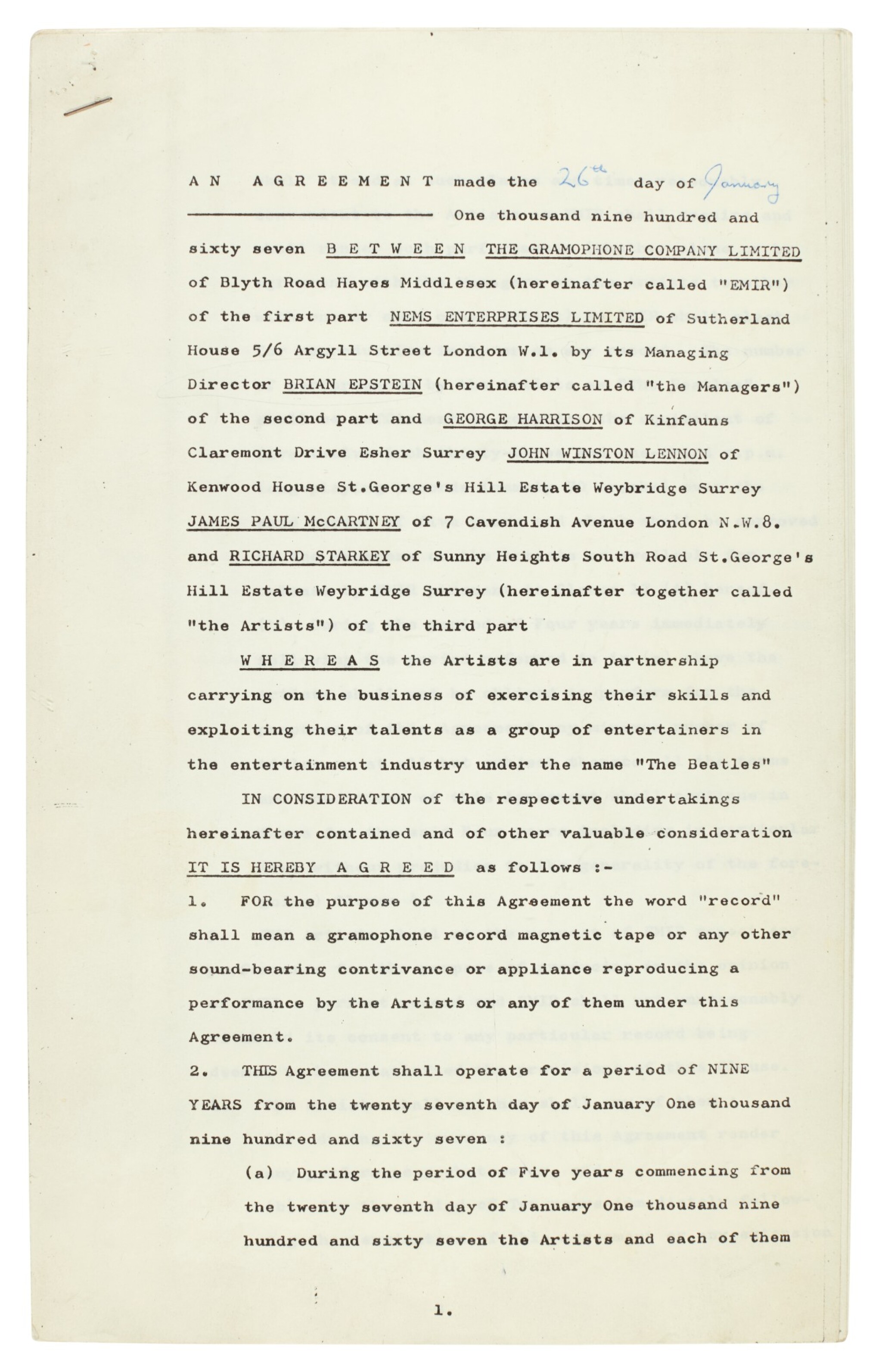 A cache of papers relating to the financial affairs of the Beatles, Nems, and related companies:

i) Memorandum and Articles of Association of Nemperor Artistes Limited ... Incorporated the 11th day of November 1965, prepared by M.A. Jacobs and Sons under the Companies Act of 1948, 9 pages, printed wrappers

iv) Photocopy draft agreement between Nemperor Holdings and the Directors of Nems on the sale of shares, with revisions, 5 pages, December 1968

vi) Photocopy draft Heads of Agreement between Triumph Investment Trust, the Beatles, and others, regarding the Beatles financial arrangements, with corrections and two signatures, 9 pages, 9 July 1969

viii) Photocopy Memorandum Under Seal, regarding the transfer of funds between Nemperor Holdings and Nemperor Artistes, 2 pages, c.1970;

A CACHE OF PAPERS PROVIDING AN INSIGHT INTO THE INNER WORKINGS OF THE BEATLES. This lot includes an internal working copy of the Beatles’ record contract with EMI of January 1967. This was the result of lengthy negotiations by Brian Epstein following the expiry of their first contract, which had been signed in 1962 when the Beatles were unknown. The 1967 contract increased both the band’s royalties and their artistic control – removing, for example, the ability of Capitol Records to change the artwork or track listing of their albums for American release – but bound the band to the record company for a period of ten years. Considering the immense earning power of the Beatles the level of royalties was still not generous, and the contract was renegotiated by Allan Klein in 1969.

This group of papers derives from the "money man", Martin Wesson (1938-2009). Wesson was an accountant hired by Brian Epstein to handle the increasingly complicated financial affairs of Nems and its affiliates. His responsibilities includes paying band members, overseeing royalties, and preparing the accounts within the Nems group. Wesson later worked with Robert Stigwood and at EMI, and continued to work as an accountant in the music and entertainment industry for many years.