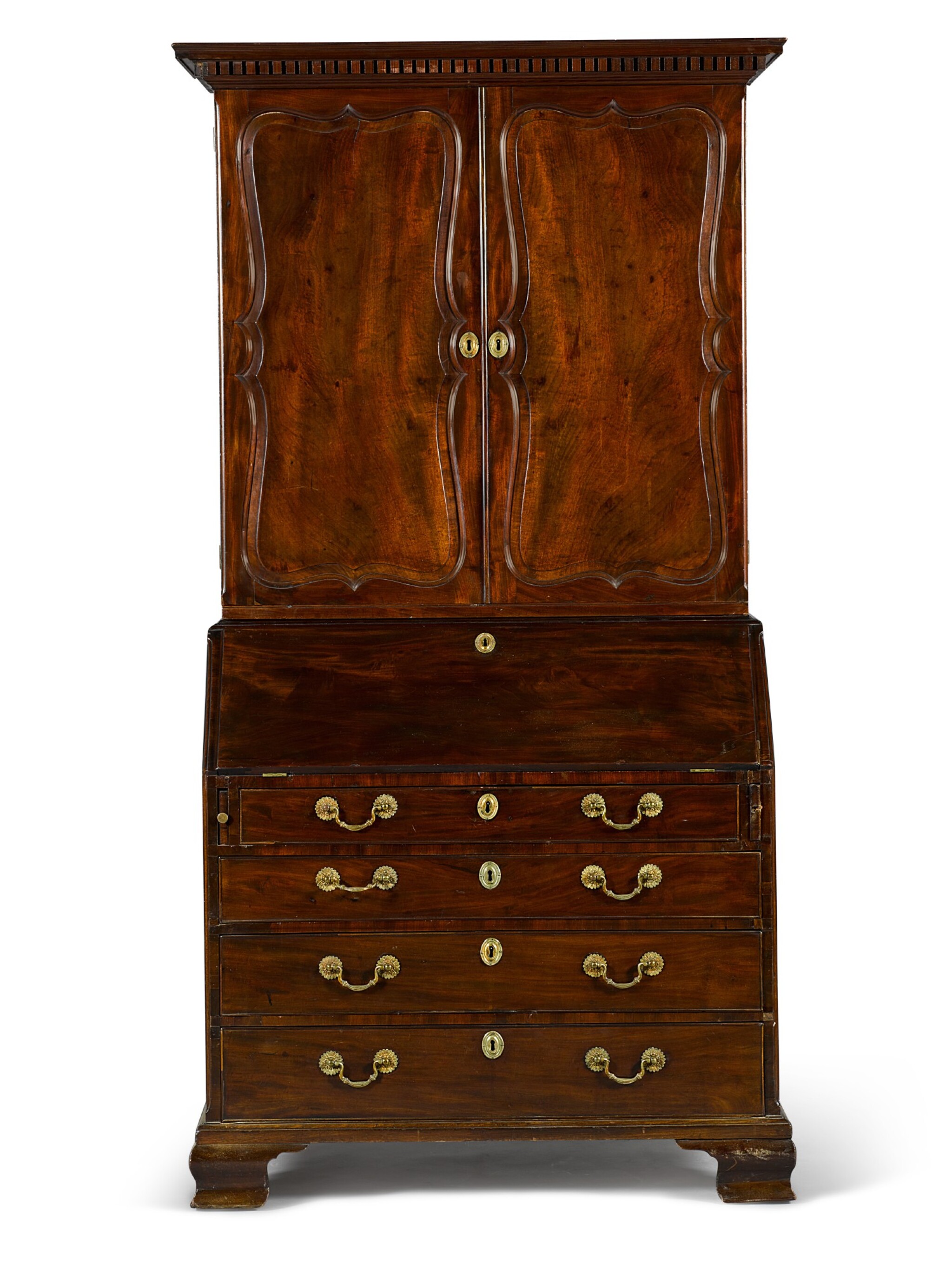 In reasonable restored condition. Metalwork probably replaced. Losses and some replacements to dental frieze. Re-polished and generally with typical old marks, scuffs and scratches consistent with age and use. Some replacements to veneers and patch repairs throughout, notably to peripheral edges, fall-front and cock-beading to drawers. One loper missing its handle. Plug repairs to sites of former carrying handles to sides of upper section. Some shrinkage splits panelled cupboard doors. Would benefit from further cosmetic work according to taste.

Giles Grendey (b. 1693- d.1780) of Aylesbury House, St. John’s Square, Clerkenwell, was described at the time of his wife’s death as a ‘great dealer in the Cabinet way’, and further in 1755 when his daughter married the Royal Cabinetmaker John Cobb as an ‘eminent Timber Merchant’. Apprenticed in 1709, Grendey who was born in Wotton-under–Edge in Gloucestershire, became a freeman in 1716, by 1726 taking apprentices into his own employ. After his marriage in 1720 he became a freeman of the City of London and was elected to the Livery of the Joiner’s Company in 1729.

Although it is obvious that Grendey’s business was considerable, only a small number of documents exist recording the names of his clients and the extent and nature of their commissions. These include Richard Hoare of Barn Elms, Surrey whose bill dated 1723 included a chest of drawers, a ‘Burow Table’, dressing glasses, chimney glasses, and a ‘Wrighting Disk’, further acquiring in 1732 wall sconces, gold frames for glasses, tables and a chest. In the account book of Henry Hoare dated 1746-1756 various payments are recorded including £46 for chairs and in 1762 Lord Scarsdale of Kedleston Hall acquired ‘1 Fine Jamai. Mahog. Plank’ for £21. His extensive oeuvre is further illustrated by a number of examples which unusually retain his printed trade labels, one of which declares that Grendey ‘Makes and Sells all Sorts of Cabinet-Goods, Chairs and Glasses’ as seen on the present bureau-bookcase. Labelled pieces include various forms of furniture such as clothes presses, chests of drawers, mirrors, drop-leaf tables, chairs and of course bureau-cabinets. Many of the pieces of seat furniture are stamped with the initials of Grendey’s journeymen, several of which relate to his recorded apprentices allowing further attributions to be made to unlabelled pieces. The largest group of these is found on a suite of scarlet-japanned furniture which was supplied by Grendey to the Duke of Infantado, Lazcano Palace, Spain.

As Simon Jervis notes his work mostly ‘falls into three stylistic groups: neat well-made pieces in walnut and mahogany, similar pieces lacquered in scarlet for the Spanish market, and a minority of more elaborate works with idiosyncratic carved decoration and shaped panels’ (Geoffrey Beard and Christopher Gilbert, Dictionary of English Furniture Makers 1660-1840, Leeds, 1986, p. 372). The present bureau-cabinet falls into the first category and the unusually shaped paneled doors are found on several other pieces of case furniture by Grendey. Something of leitmotif associated with his output they also featuring on red-japanned desk bookcases from the aforementioned Lazcano suite. Further labelled pieces with these ‘idiosyncratic’ panels, constructed in plain mahogany with either blind or mirrored doors are illustrated Christopher Gilbert, Pictorial Dictionary of Marked London Furniture 1700-1840, Leeds, 1996, plates 432 and 433.