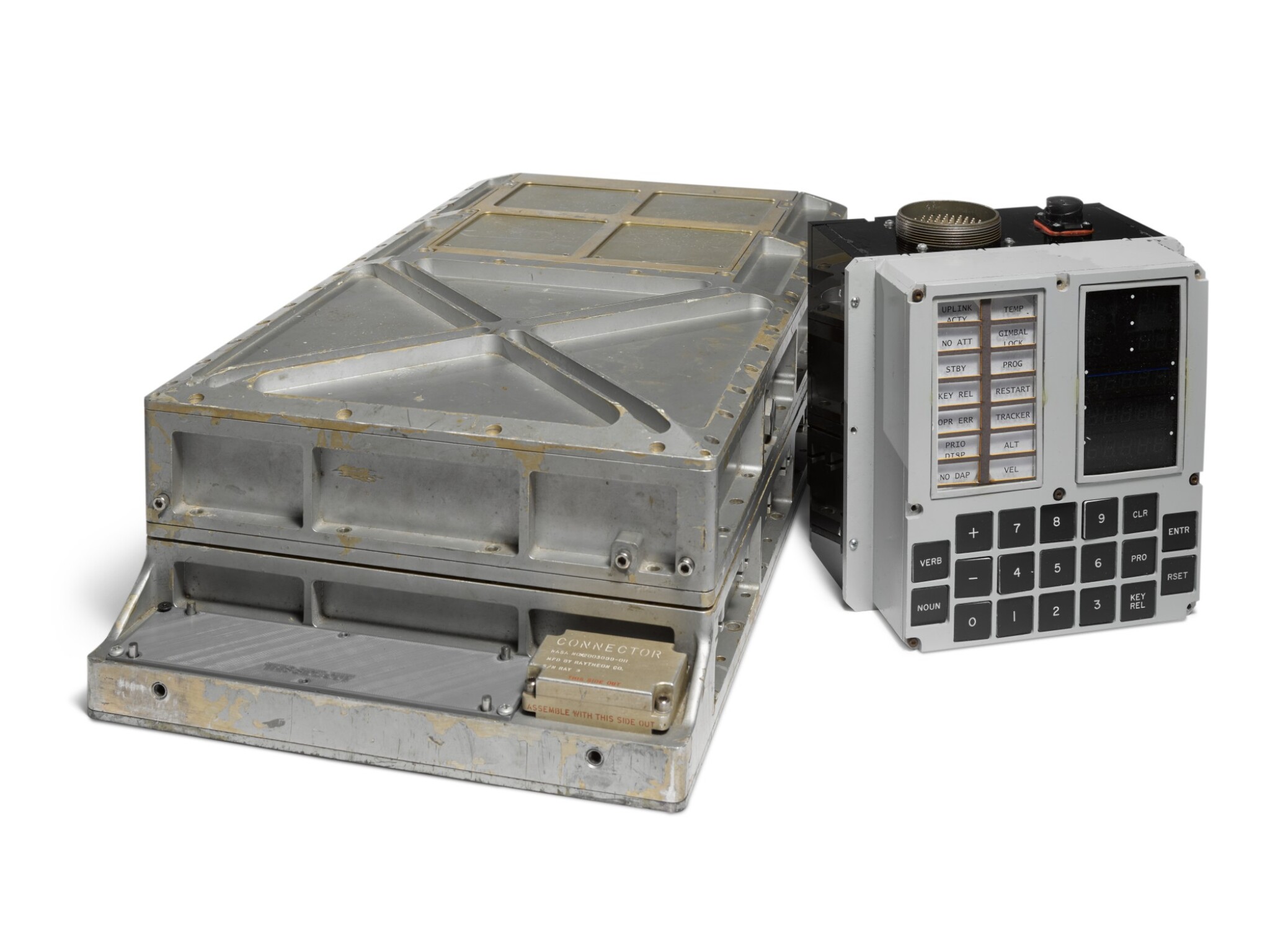 Installed on both the Command and Service Module (CSM) and the Lunar Module (LM) of the Apollo spacecrafts, the Apollo Guidance Computers (AGC) were developed to navigate the Apollo spacecraft to the Moon, guiding the Lunar Module down to the lunar surface, back up to the Command Module once finished, and back home again. Prior to the lunar landed missions, NASA wanted to test the CSM and LM in simulated space conditions, and the Lunar Test Article 8 (LTA-8), was built in 1965 by Grumman for that purpose. The testing took place in May and June of 1968, in the Manned Spacecraft Center’s thermal vacuum test chamber “B” at the Space Environment Simulation Laboratory, with the present AGC on board. LTA-8 was crewed by both Jim Irwin (who would go on to become the Lunar Module Pilot for Apollo 15) and Grumman test pilot Gerald Gibbons as well as Grumman test pilot Glennon Kingsley and Air Force Maj. Joseph Gagliano, each working shifts running anywhere from 9-12 hours at a time. Irwin particularly enjoyed the simulation testing, saying that the LTA-8 test was “almost more rewarding” than his actual trip to the lunar surface on Apollo 15. The present AGC played a pivotal role during these tests, allowing the lunar lander to eventually be approved for spaceflight.

The Birth of the AGC

In his address to Congress on May 25, 1961, President John F. Kennedy declared his national goal of landing a man on the Moon and returning him safely to Earth” before the end of the decade. With those words, President Kennedy set in motion what would become the most ambitious and challenging technological endeavor in the history of mankind.

Project Apollo, birthed out of President Kennedy’s speech, presented NASA with a seemingly impossible task given the computer technology available in the 1960s. One thing was certain: this mission outstretched human capacities, requiring calculations far too complex and time-consuming for the astronauts alone to handle while in flight. As such, on August 9, 1961—just six weeks after the commencement of the Apollo program—NASA awarded the MIT Instrumentation Laboratory with its first Apollo contract to design, develop, and construct an onboard computer, later named the Apollo Guidance Computer, that would assist with the navigation, guidance, and flight control functions of the spacecraft. This choice was in large part because MIT, under the direction of laboratory head Charles Stark Draper (who the lab is know named after) and lead hardware engineer Eldon C. Hall, had a strong record in developing inertial guidance systems for the US Navy’s Polaris Missile Computer in the 1950s. Raytheon, who also played a key role in the construction of the Polaris computer, was brought on soon after to take over the manufacturing element of production.

The AGC had two flight versions: Block I and Block II. Block I AGCs, MIT’s initial design, was largely influenced by the architecture of the Polaris computer and was used primarily for unmanned and early manned development flights (all relatively simple earth-orbital missions) between August 1966 and April 1968, including the unmanned Apollo 4 and 6 flights and the ill-fated Apollo 1. The Block II design maintained the original architecture of the Block I design, however, it incorporated newer technologies that addressed issues arising from experience in early unmanned flights with the Block I computer. In the end, the Block II AGCs had twice as much memory, more I/O capability, required less power, and was smaller and more reliable than the Block I computers. It was this design version that guided manned missions and that landed man on the Moon in 1969. Of Block II design, the present AGC stands as one of the 57 Block II AGCs NASA produced throughout the Apollo program.

Throughout its nine-year lifetime from 1966 to 1975, the AGC flawlessly flew on over 15 manned missions, including nine flights to the Moon, all six lunar landings, three Skylab missions, and the Apollo-Soyuz Test Project mission. While it was not the first computer ever to be flown in space, the AGC did achieve several firsts for the history of space exploration and computer technology. Unlike earlier space computers, the AGC was the first onboard computer where the lives of the crew depended on it functioning properly and without ground support; it was the first computer based on silicon integrated circuit (IC) chips, enabling it become the most advanced miniature computer at the time; and it was the first completely digital fly-by-wire system. An enduring legacy, the AGCs influence extended beyond the Moon landing, serving as the basis for the computer technology used on the Space Shuttle, a space vehicle entirely controlled by the onboard computer, and on the earliest computer-controlled aircrafts.

Communicating with the AGC: the DSKY

While in flight, the crew communicated with the AGC through the novel user-interface system called the DSKY (pronounced “DIS-KEE”). Short for the “display and keyboard,” the DSKY display included a calculator-style keyboard for entering data, a numeric display that published the inputted data, and an array of indicator lights which alerted the view of any onboard issues or updates. Rather than typing in strings of written words, commands were manually entered in two-digit numeric codes, used to represent Verbs (the actions to be performed) and Nouns (the objects of the actions). The crew could request maneuver angles (verb 50, noun 18), monitor changes while maneuvering (verb 06, noun 84), request the change in velocity required for the next maneuver (verb 06, noun 84), among many other functions required for space navigation. Altogether, it took about 10,500 keystrokes on the DSKY to get to the Moon and back!

The AGC was a marvel of early computing technology: from large to small, from punch cards to microchips, from hardware to software. In an era when most computers occupied entire rooms, the AGC was uniquely small and lightweight, measuring just under one cubic foot (24 x 12.5 x 6.5 in.) and weighing only 70 pounds (32 kg). With an engineering courage that had few precedents, the MIT engineers pioneered the application of integrated circuit (IC) chips to achieve this very impressive, miniature scale. Invented just a few years earlier in 1959, the use of IC chips for the AGC was ahead of its time. In fact, the AGC was the first computer ever based on IC chips. Between 1961 and 1965, NASA’s Apollo Program was the largest single consumer of IC chips, consuming 60 percent of the IC total production in the United States during 1963 and shipping more than 100,000 ICs by 1964. With these state-of-the-art microchips, engineers were able to assemble and tightly package all the computer’s logic circuitry with a single type of logic gate, the 3-input NOR gate. While it took nearly 5,000 of these gates, as well as almost 3,000 ICs and 17,000 transistors, to complete the logic tray of a single AGC, the use of NOR gates alone allowed for a simpler, faster, and more reliable design.

As Apollo mission requirements continuously grew, so too did the need for additional memory storage within the AGC. While MIT’s original design for the AGC called for only 4K words of fixed, read-only memory (ROM) and a mere 256 words of erasable, random-access memory (RAM), the computer’s final configuration leapt to 36K words of ROM and 2K words of RAM, an increase 18 times over the original estimates for its fixed memory and 16 times over for the erasable. These quantities, still millions of times less than the memory storage of a single iPhone, allowed for just enough space for the mission-critical software.

To store the software, MIT engineers adopted the use of Core Rope Memory from the original Mars probe computer in 1958. With this method, the written software was woven, literally, onto handmade rope memory, contained inside the computer’s six fixed memory modules. Needles carrying half a mile of copper wire were run through or around 512 magnetized iron cores, with each wire threaded through a ring representing a binary “1” and each wire bypassing a ring representing a “0.” Dubbed the LOL method, for “little old ladies,” the rope memory was skillfully sewn by female workers recruited from local textile factories. While the core rope technology allowed more information to be stored in less space, it was a strenuous process. Because the software data stored in the wires could not be erased, altered, or corrupted once it left the factory, the assembly of the memory modules required absolute precision. All in all, it took about eight weeks for the workers to weave the memory for a single flight computer, at a cost of $15,000 per module.

The software developed for the AGC was as ingenious and integral to mission success as the cutting-edge hardware. During the 1960s, software, as a concept, was still in its infancy; written code was still being keyed onto punch cards and fed into computers in order to run a single program. However, the mission objectives for the Apollo program demanded a more advanced software, one that would be capable of handling unknown problems while in flight and flexible enough to interrupt one task and prioritize a more important one.

Perhaps the most crucial aspect of the AGCs’ entire design process, software development was assigned to Margaret Hamilton, a 25-year old woman who showed promise in systems programming with her invaluable contributions to the Semi-Automatic Ground Environment program in 1960. As the first programmer to be hired for the Apollo project at MIT, Hamilton joined the ranks of the heavily male workforce for the Apollo program as a dedicated and determined leader. She captured the spirit of working on the AGC and for the Apollo program: “How fortunate I was to work with and share this experience with the many talented and dedicated people who made this possible. There was no second chance. We knew that. We took our work seriously, many of us beginning this journey while still in our 20s. Coming up with solutions and new ideas was an adventure. Dedication and commitment were a given. Mutual respect was across the board. Because software was a mystery, a black box, upper management gave us total freedom and trust. We had to find a way and we did. Looking back, we were the luckiest people in the world; there was no choice but to be pioneers.”

A pioneer indeed, Hamilton and her team, which reached a peak of 350 people in 1968, developed fundamental software design principles that are still used today. Established using a combination of assembly language and an interpreted mathematical language, the final form of the AGC software featured foundational design concepts such as fly-by-wire capability, priority scheduling, human-in-the-loop decision making, and asynchronous processing, all of which were revolutionary at the time. These innovations turned out to be a mission-saving grace for Apollo 11, the historic mission that landed man on the Moon. In the moments before Neil Armstrong, Buzz Aldrin, and Michael Collins landed on the lunar surface, the LM AGC became overloaded as a result of an improper adjustment of the rendezvous radar switch. Fortunately, because Hamilton created the AGC’s software so that it was capable of priority scheduling, the computer immediately began discarding the less important tasks occurring concurrently and focusing instead on the highest priority: guiding the LM’s descent and safely landing onto the lunar surface. Had it not been for Hamilton’s design, the landing would have been aborted and with it, no historic first step for man, no giant leap for mankind.

Ultimately, the AGC was as much of a testament to innovative engineering as it was to the dedication and hard work of MIT and Raytheon employees. All in all, it took nearly 2,000 man-years to assemble and package all 30,000 individual components of the AGC’s hardware, and almost 1,400 man-years to code the necessary programs and instructions for its hardware.

Sotheby's would like to thank Science & Popular Culture department intern James Pease for his invaluable assistance with the research on this lot.

To view video documentation of the restoration and powering up of the present lot, see: Apollo Guidance Computer Restoration: https://youtube.com/playlist?list=PL-_93BVApb59FWrLZfdlisi_x7-Ut_-w7

For an excellent account of the restoration and powering up of the present lot, see Robert Lee Hotz, "An Apollo Spacecraft Computer is Brought Back to Life", IN: The Wall Street Journal, July 14, 2019. accessed at : https://www.wsj.com/articles/an-apollo-spacecraft-computer-is-brought-back-to-life-11563152761