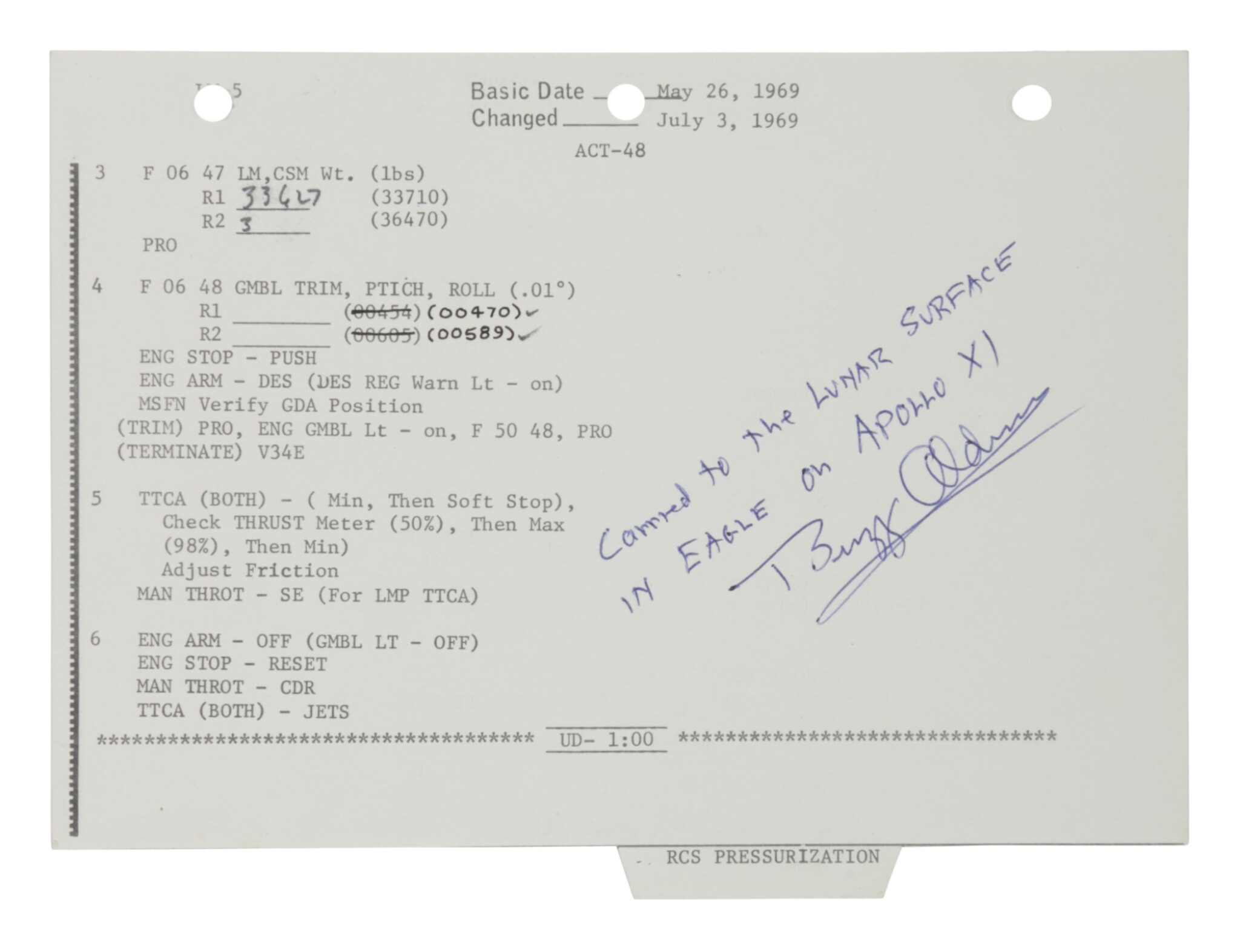 A single 6 x 8 in. sheet printed recto and verso, with "RCS PRESSURIZATION" on tab on both sides, providing the steps to take in order to properly activate Eagle in preparation for the first ever lunar landing.

SIGNED AND INSCRIBED IN BLUE INK BY BUZZ ALDRIN, "CARRIED TO THE LUNAR SURFACE IN EAGLE ON APOLLO XI / BUZZ ALDRIN", WITH TWO LINES OF NUMERICAL ANNOTATIONS AND TWO CHECK MARKS IN BLACK FELT-TIP PEN BY MISSION COMMANDER NEIL ARMSTRONG. With a typed letter signed by BUZZ ALDRIN using his personal stationary.

Flight sheets taken to the lunar surface are extremely rare, and those with notations by Armstrong even more so.

Steps listed on this sheet were performed just one hour prior to undocking from the Command and Service Module to being the descent to the Lunar Surface. These included the continuation of steps for the DAP (Digital Auto Pilot), as well as the first four steps in the RCS (Reaction Control Subsystem) Pressurization.

BUZZ ALDRIN'S SIGNED provenance letter reads, in part: "Side ACT-48 lists the continuation of steps for the "DAP (Digital Auto Pilot) SET, GIMBAL/THROTTLE TEST." Step three required Neil to log the computer register value R1 of "33627", our Lunar Module weight and R2 of just "3", the Command and Service Module weight. The second value was most likely so close the the expected value that he did not complete the entry. Neil then made the two check marks to verify that the next R1 and R2 values were as expected. We completed the other steps which included pushing the "ENG STOP" switch, setting "ENG ARM" to "DES" (descent), and verified that the "ENG GIMB" light was on. After completing the final steps at the end of this page, we were only one hour away from undocking "UD - 1:00. Side ACT-49 has the first four steps in the "RCS (Reaction Control Subsystem) PRESSURIZATION" which actually began about 30 minutes ahead of the planned time. This subsystem used a group of four small rocket engines attached at four equal distant points outside on our Ascent Stage to provide Eagle's attitude control during flight. We recycled the "SYS A&B ASC(ent) FEED" switches as indicated then verified our fuel quantity was at 100 percent. The four "ASC FUEL & ASC OXID" tb (talk-back) indicators remained with barber pole (bp) flags as expected and the eight tb's for the "THRUSTER PAIR QUADS" showed gray. All other steps went as planned."