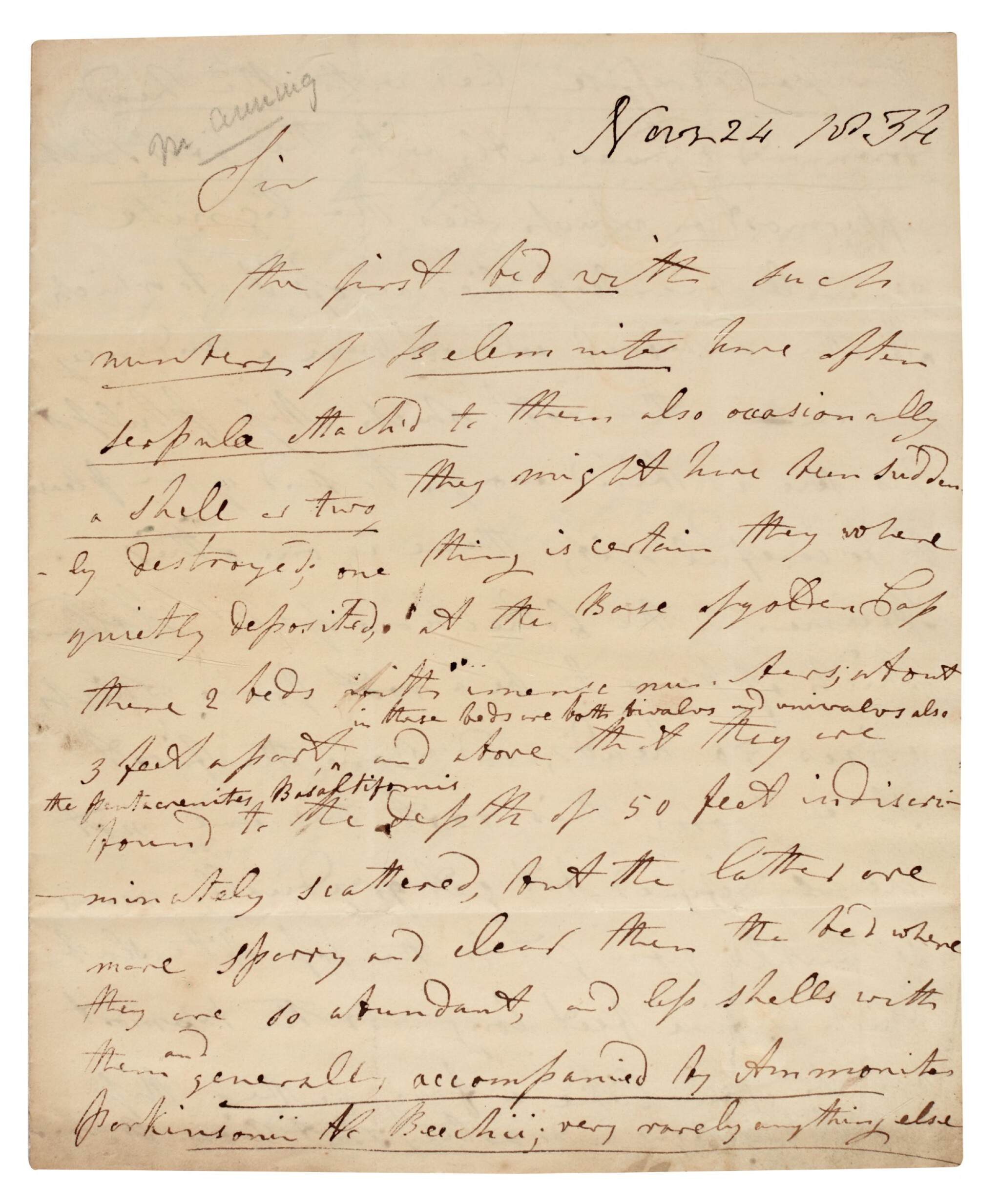 reporting her latest discovery of beds of Belemnites and Pentacrinites on the coast off Golden Cap in Dorset, with a careful and original analysis of their distribution ("...the pentacrinite lies with the head downwards invariably, with the footstalks uppermost on which lies the lignite generally one leaf lies across it, to which all the vertebral colums [sic] have a tendency to turn..."), asking him to take particular care of a specimen which Miss Philpot is sending him and describing another specimen in the collection of George Holland ("...which appears to be a root from which arises 50 heads, and where the first start from this root they are not clearly defined but get gradually more so until you get to the top of the slab which is five feet long and the topmost branch opens like a fan..."), but apologising that neither she nor Miss Philpot are confident of sketching this example, 3 pages, 8vo, integral address panel, [Lyme Regis], dated by recipient 24 November 1834, small area affected by damp in lower outer corner of second leaf

AN IMPORTANT AND LARGELY UNPUBLISHED LETTER BY MARY ANNING ON FOSSIL CRINOIDS. This letter reveals that Mary Anning engaged in coastal excavations along the Jurassic Coast (Golden Cap is some five miles east of Lyme Regis) and shows her engaging in careful analysis of her fossil discoveries. Crinoids, or "sea-lilies", are marine animals related to starfish and sea urchins with feathery fronds off a central stem that anchors to a solid surface - and the Pentacrinite, as the name suggests, was a species with distinctive five-sided stem segments. They are found in the marl along the Dorset coast in spectacular masses of well-preserved fossils. William Buckland acknowledged Anning's research into the species in his Bridgewater Treatise, crediting her observations with leading to the conclusion that "the creatures had attached themselves, in large groups, (like modern barnacles), to the masses of floating wood, which, together with them, were suddenly buried in the mud, whose accumulation gave origin to the marl." (Quoted in Sharpe, The Fossil Woman: A Life of Mary Anning (2020), p.91). For a closely related letter on Anning's ongoing research see lot 42.

Letters by Mary Anning are exceptionally rare. Although Mary Anning was something of a celebrity in her day, her gender and class prohibited her from ever becoming a member of the scientific establishment and it is only in recent decades that her importance has been fully acknowledged. She is now the subject of multiple biographies, is a mainstay of the school curriculum, and has been played by Kate Winslet in the biopic Ammonite (2020). The majority of her papers were discarded as of little value by C.W. Sherborn at the turn of the twentieth century, and only a relatively small number of letters survive, mostly amongst the papers of such pioneer geologists as Buckland and Adam Sedgwick.