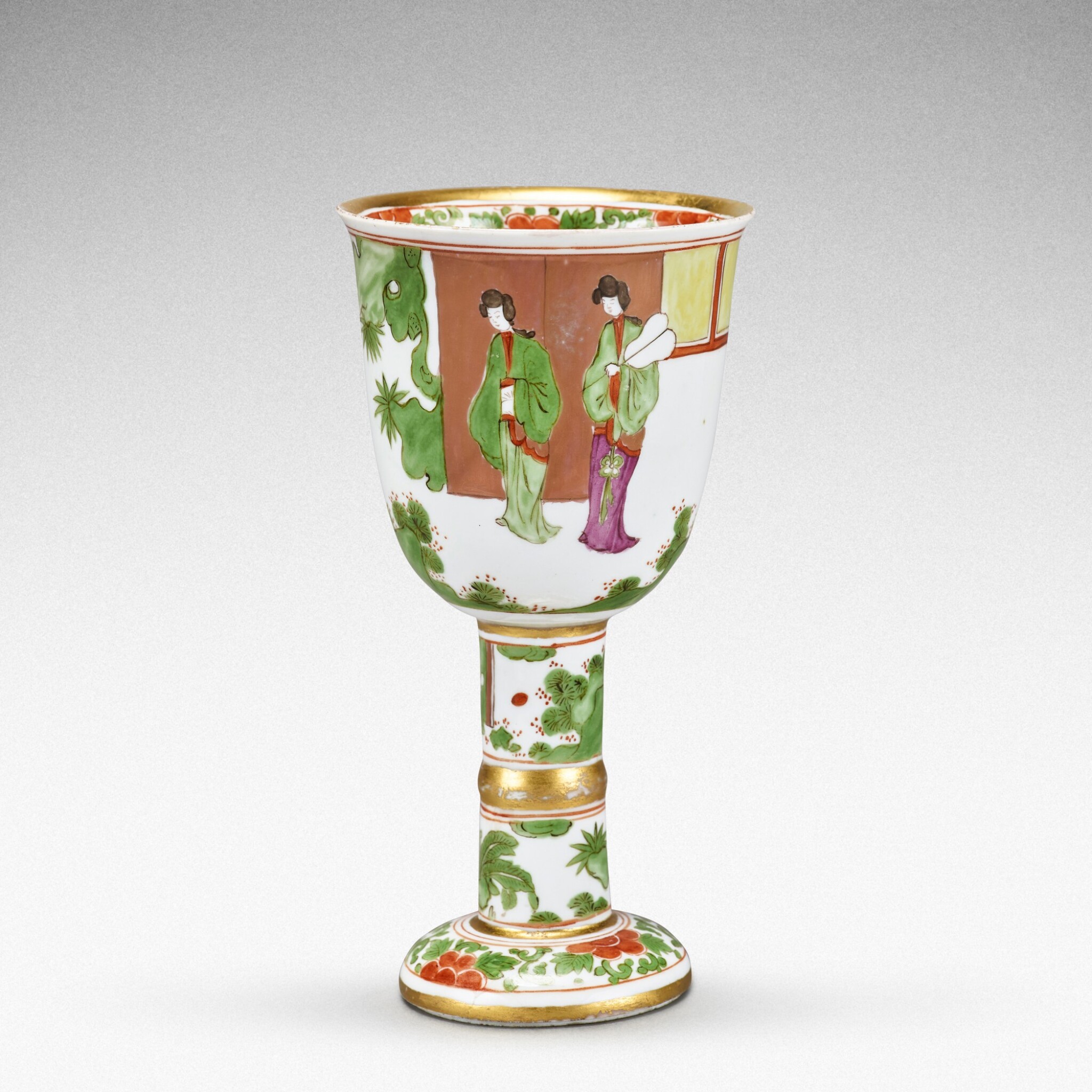 A D-shaped section of the cup has been broken and repaired. The affected section is approximately half of the circumference of the rim at widest point and curves to a point on one side. It has been in 3 sections and 2 smaller chip-parts at the rim edge. There are traces of four sets of filled-in rivet holes to the outside. There is some surface restoration at parts of lustre, and some in-fill along breaks. The foot has been in two parts and repaired.

The upper and central band of the stem has had gilding re-applied since the 2000 catalogue illustration. The overall visual impression of the goblet is good.

Recovered from the above by Allied Monuments Officers and transferred to the Central Collecting Point Munich (MCCP inv. no. 1616/35);

Only five or six pieces of Meissen porcelain painted in this distinctive famille verte style appear to be recorded. A (K.P.M) teapot was in the collections of Erich von Goldschmidt-Rothschild, Berlin, sold, Hermann Ball & Paul Graupe, Berlin, March 23-25, 1931, lot 483; and Otto and Magdalena Blohm, New York, illustrated in Robert Schmidt, Early European Porcelain as collected by Otto Blohm, 1953, no. 21, pl. 6., sold, Sotheby Parke Bernet, New York, July 5, 1960, lot 137. An (M.P.M) teapot of the same form was in the collection of Gustav and Charlotte von Klemperer, Dresden, illustrated in Ludwig Schnorr von Carolsfeld, Porzellansammlung Gustav von Klemperer, 1928, cat. no. 107. It subsequently entered the Ralph Wark Collection, Florida and in 2012 the teapot was restituted to the heirs of Gustav and Charlotte von Klemperer and was sold at Bonhams London, November 26, 2014, lot 176. A third goblet, the only other example recorded, is in the Porzellansammlung, Dresden, inv. no. PE 618. illustrated in Otto Walcha, Meissner Porzellan, 1973, pl. 46.

A recently traced Meissen octagonal sugar box, which was in the Sir Bernard Eckstein Collection, sold, Sotheby's London, May 31, 1949, lot 127, and acquired by Asprey, probably represents a sixth piece painted in this rare pattern.

The form may derive from a Chinese Kangxi blue and white porcelain prototype, examples of which were in the collection of Augustus the Strong and remain in Dresden today, inv. nos. PO 2386/2387. The form also exists in Japanese Kakiemon porcelain, and three are in the historic collection at Burghley House, Peterborough, inv. no. CER0488/0083.