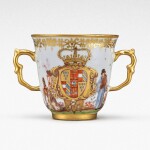 In overall in good condition and appearance, with a few very minor scattered flakes to gilding on rim edge.

Gift of Augustus III, King of Poland and Elector of Saxony, to Elisabeth Farnese, Queen of Spain, on the occasion of his daughter's marriage to the King of Naples;

The Royal Collections of Saxon, Johanneum, Dresden (acquired from Bode in 1901);

Recovered from the above by Allied Monuments Officers and transferred to the Central Collecting Point Munich (MCCP inv. no. 1571/20);

In May 1738, Augustus III's daughter, the 14-year-old Princess Maria Amalia of Saxony (1724-1760), was married, by proxy, in Dresden, to Charles VII (1716-1788), King of Naples. Shortly thereafter she set out on the month long journey to her new home in Italy, accompanied by her older brother, the crippled Crown Prince Friedrich Christian, who was travelling incognito to an island off the coast of Naples in hope of a cure. In celebration of the marriage, Augustus presented his young daughter with the gift of a silver toilette service which included Meissen armorial tea and chocolate wares. The marriage had been orchestrated by Charles' ambitious mother, Elisabeth Farnese (1692-1766), Queen of Spain, who wanted to keep control of the courts of Savoy and Naples, as well as Spain, within her family. She too received a gift from Augustus, a substantial group of Meissen porcelain, so numerous in size that it filled seventeen boxes and which included a service decorated with her family's arms.

The gift itself was somewhat tinted by scandal. According to a surviving packing list it was prepared for shipment by June 29, 1738 and its delivery to Madrid was entrusted by Count von Brühl, director of the Meissen factory, to a Frenchman named Velasco. However, unbeknownst to Brühl, Velasco was a swindler, who was wanted by most of the courts of Europe, and who had already embezzled four million florins from the Spanish ambassador to The Hague. Upon learning of his misjudgment, "Wanted" posters for Velasco appeared throughout Europe describing him as "of around twenty-four, small, well built, tanned, blond, brown eyebrows, blue eyes...". He and the porcelain disappeared, and while the porcelain was eventually found the following August in Livorno, Velasco remained at large, reappearing in London a few years later, Cassidy-Geiger, 2007, p. 213.

The gift arrived at El Escorial Palace, Madrid on November 12, 1738. According to the gift packing list from June that year, it included thirteen coffee, tea and chocolate services; among which box 1 included an armorial service decorated with the "Royal Sicilian" arms and landscapes; and boxes 4-7, each respectively held a service decorated with either a purple, gris-de-lin, seladon, or yellow ground colour. It is conceivable that these services may have been formed from wares originally destined for the color-coordinated rooms of the Japanese Palace. Similarly, included in box 13 was a seven vase 'harlequin' garniture, formed of a central gris-de-lin-ground vase, two seladon, two yellow and two blue-ground vases. The service to which the present lot belongs was probably packed in box 14, which contained a service '...mit Wappen inwendig gantz verguld und Chinesischen Figuren', [...with coat-of-arms and Chinese figures], Cassidy-Geiger, 2007, pp. 338-40.

It is not known when the service left the Spanish Royal Collection but by 1901, parts, or the service in its entirety, were in the possession of Berlin curator Wilhelm von Bode (1845-1929), who that year sold the majority to the Porzellansammlung, Dresden. These pieces, which remain in Dresden today, inv. nos. PE 1506 a-o, included a chocolate pot, teapot, sugar bowl, four two-handled beakers, three teabowls, four saucers, and a lobed stand, illustrated Cassidy-Geiger, ibid., p. 216, fig. 10-15. The waste bowl was in the collection of Ed. L. Behrens, gifted by Mrs. Esther Behrens in 1922 to the Museum für Kunst und Gewerbe, Hamburg, illustrated in Jedding, 1979, p. 55, fig. 74.