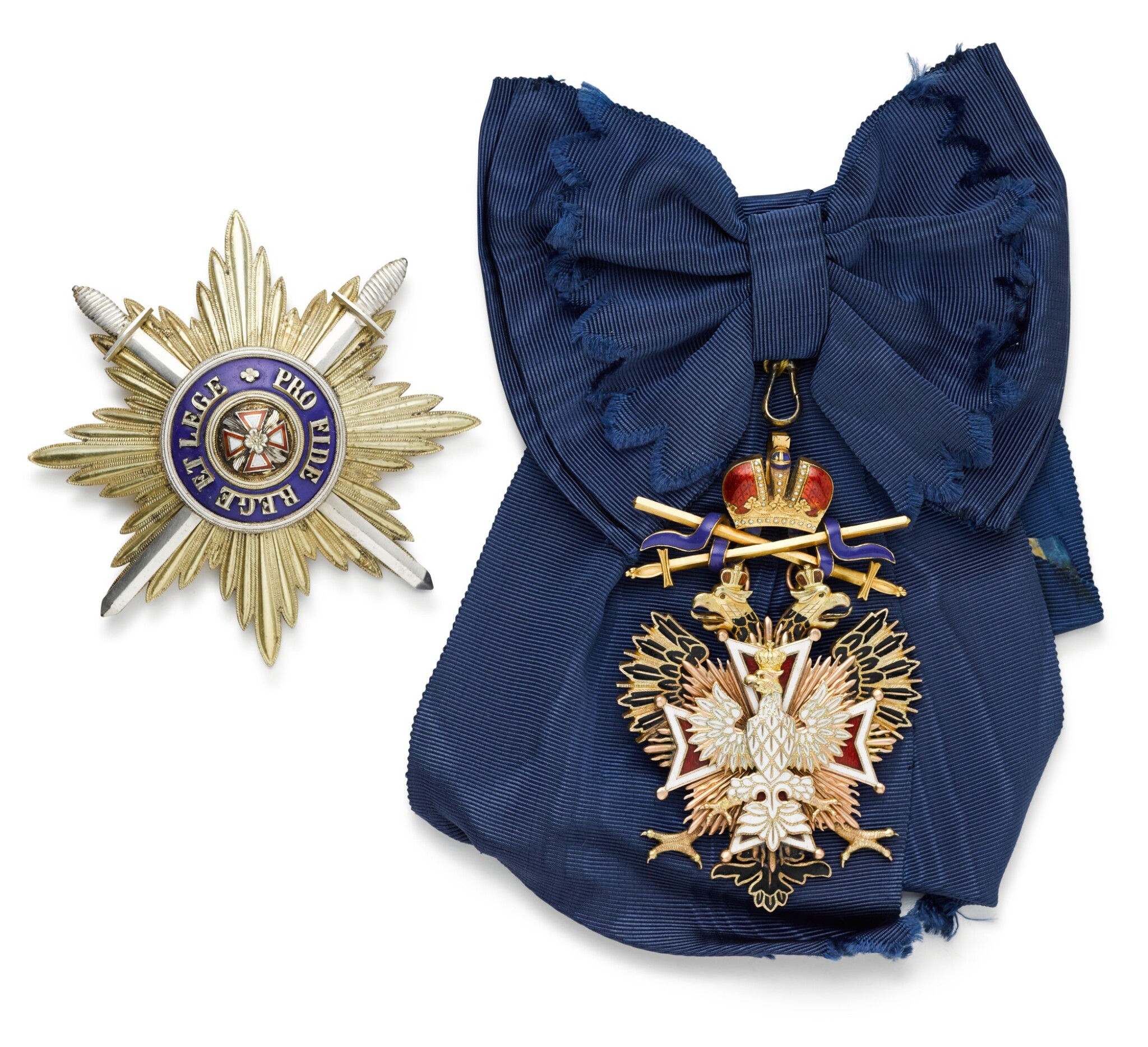 (i) Badge, by Eduard of St Petersburg, in two-colour gold and enamel, in the form of a white enamelled eagle on a Maltese Cross over black enamelled Imperial eagle, with Imperial crown suspension linked to eagles’ heads, rev., centre with white enamelled cross with red border on plan gold rays and gold MARIA monogram, struck to loop with maker's mark, 56 standard, 95mm by 59mm;

(ii) Breast star, by Keibel of St Petersburg, in silver-gilt, the motto of the Order PRO FIDE REGE ET LEGE (For Faith, King and Law) in gold letters on a blue enamelled ground, the centre with red and white enamelled cross, gold central rosette and silver rays on gold background, struck to back with maker's mark, 84 standard, 91mm by 91mm,

The set in a red leather case with silk lining, with a length of blue sash

Badge: Very good condition overall. The swords probably added later, the blue ribbon with areas of restoration to enamel, one small area of re-enamelling of the white border of the badge.

Box: Some light surface scratching consistent with age and use, leather coming away at edges, taped at the back across hinge

The Sandars Collection of Russian Imperial Orders; Sotheby’s, Geneva, 16 May 1991, lot 338
Acquired at the above sale by the family of the present owner

The Order of the White Eagle

One of the oldest of all European knighthoods, the Order of the White Eagle was founded in 1325 in Poland. In the eighteenth century, however, with the Polish partitions, the Russian Emperor Alexander I took control of the order and awarded it to his Polish subjects. It was officially absorbed by the Russian imperial award system in 1831 under the reign of Nicholas I, at which time the insignia was altered to include the imperial double-headed eagle. Eventually, this Order became one of the most important of the Russian empire. Though there was only one class, diamond orders were sometimes awarded, and military merit was commemorated by the addition of swords. Due to its Roman Catholic origins, Russian Orthodox clergymen were not awarded this particular order.

Insignia of the Order

The badge of the order is a gold Maltese cross pommy of red enamel and white borders. A white enamel Polish crowned eagle sits at the centre of an ornamented gold sunburst motif. This composition is superimposed over a black enamel, crowned double-headed eagle which hangs below an imperial crown with red enamelling. Traditionally, the eight-pointed breast star was made of silver, though this was temporarily changed to gold during the reign of Nicholas I. A red and white cross with the same sunburst motif centres the medallion and is surrounded by a dark blue enamel band which bears the Order’s motto, Pro fide, rege et lege (‘For faith, king and law’), in gold, though this cross was replaced with the imperial double-headed eagle for non-Christian recipients. The dark blue moiré sash was worn over the knight’s left shoulder.

The monumental collection of Orders and Decorations of Paul Sandars Sr was inspired by a gift from his son of a 4th class Badge of St Stanislaus Badge, that he acquired on a visit to Paris. Sandars, who had grown up and trained as a musician in Moscow, had relocated to Germany, then Paris, and finally New York following the occupation of France in 1943, where he entered the world of perfumery. His son’s gift of the St Stanislaus Badge provoked such excitement in Sandars that he began researching the history of the Russian Order. His studies evoked feelings of nostalgia for his homeland and prompted him to amass the largest private collection Russian Orders and Decorations at the time. His linguistic acuity facilitated his collecting as he was able not just to research in Russian, but also to liaise with international curators, collectors and dealers. Upon his death, Sandars’s collection comprised a staggering 650 pieces, of which notable pieces from the present collection formed part (lots 7, 73, 75, 76, 78, 80-82, 85 and 89).